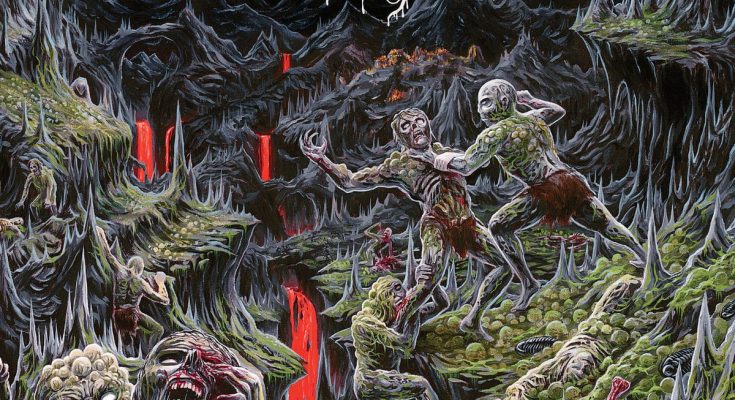 There are three types of death metal bands now days, bands who have been heavily influenced by Incantation and the cavernous death metal style. Other bands persist to reach to the supreme level of the band Death. There are also other bands who are having a compulsory kind of obsession with HM-2 distortion. These bands obviously continue to regenerate the Swedish death metal by using the trademark of the buzzing guitars. Despite of the categories and differences in styles they are all great bands who have a potential. Yet there are other musical groups who are very inclusive when it comes to death metal. And these kind of bands have a larger scope in sound when it comes to music, they are simply enclosed with the visceral elements of death metal. From Douglassville, Pennsylvania a new formalized band has risen with excellent potentiality. Outer Heaven who is a five piece band which was formed in 2013 and has released one E.P. two singles and a split album with Scorched, Gatecreeper, and Homewrecker.

Outer Heaven is a sophisticated band with excellent abilities who share their extreme effectiveness with their fellow mates from Gatecreeper and Scorched. And it’s not surprising to see them releasing their debut album under Relapse Records. This is another strong release from Relapse Records this year, Realms of Eternal Decay may have a short length in duration. But mind me if I tell you that this album is outrageously brutal and pulverising. The first track Vortex of Thought violently outbreaks into  subversion, where the band merges d-beat with blistering blast beats, double bass and fucking groove. The Incantation influence is highly present in their music, with guitars tuned to create a massive wall of sound. Outer Heaven is a putrid death metal band and they are beyond the average bands and I say this because the music itself is presented with the quality of nifty riffs.

What Lies Beneath is obtained with enough brutality of staccato riffs and heavy bass lines that cleave through the songs which are driven by fast tempo. Outer Heaven can write a number of riffs and they have proven to be very substantiating with their debut album. Pulsating Swarm reeks with rotten riffs and cavernous growls, the band can easily shift form mid pacing to blast beats. Meandering around the borders of death and doom metal, entirety of the songs are combined with massive riffs.

This track immensely plunges into the murky water of doom metal and just when you think they are slowing down into dullness, the guitars swirl around with velocity of pacing riffs. Multicellular Savagery is another organic song that sounds very fundamental. The guitars sweep with crushing sound waves through the deformity of their twisted features. Outer Heaven provides a greater amount of heaviness with technical skills as well. The band is far from being labelled as modern death metal. Echoes from Beyond contains enormous patterns of guitar riffs. Realms of Eternal Decay is assorted with lethal components that results into a mortal impact.

On Bloodspire for example, one of their standout tracks, the demonic growls are spewed like venom and the sound is generally soaked with churning guitar patterns. The track is evoked with evil riffing which gives you this wicked sensation. there is also a sense of diversity. Outer Heaven is a band that has the nature of shifting their musical soundscapes into a multi-spectrum of old school death metal. And they are somehow similar to Gatecreeper who is overly influenced by the Swedish death metal. They are simply accomplished and indirect and have found a great twist between Dismember, Morbid Angel and Incantation.

Sacrificial Evolution matches the intellectual song-writing of Morbid Angel, listen to the track and you will hear the direct influence. Putrid Dwelling evokes the complexity and the deranged style of the band Demilich, with the use of tremolo pickings and dissonant riffs of Gorguts. Decaying Realms sways towards the riffing trademarks of Morbid Angel, and it’s a great example how the band can fluctuate between various of styles. Once the track reaches halfway they shift into slower sections. The rhythm guitar constantly creates a dark atmosphere while the drums superbly carry into effective double bass and blast beats. Outer Heaven’s debut album is impressively wrought with tons of heavy riffs, and ghoulish growls of cavernous death metal. The album cover itself gives you a look at the exotic alien world of putrid imagination that meticulously reflects their demonic soundscapes of disharmony.