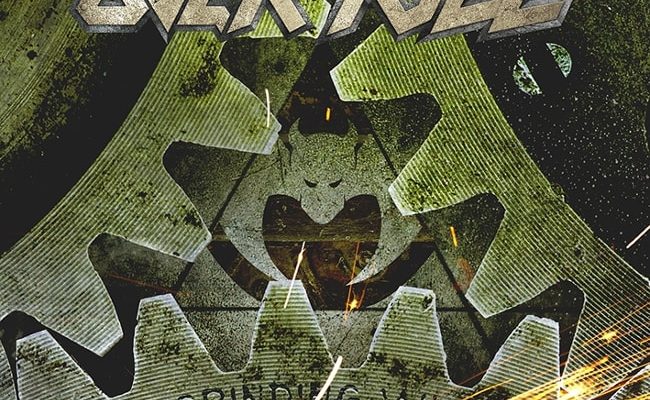 If you’re the least bit a thrash metal fan, you surely know and most likely love Overkill. The New York-based band stood at the cradle of thrash metal along with the other greats of the genre. Almost 40 years going on strong and uncompromising, or like the band says “grinding”, which is exactly the inspiration for their 18th album The Grinding Wheel. Not only their grinding on for several decades served as inspiration for the album title, also the old school heavy metal feel of the album made them want to refer to the Judas Priest classic Grinder.

There are a few things you can always count on with Overkill. First: they always convey heaps of energy. They’re basically at the “grandpa” age, but a lot of much younger bands could learn something from their attitude and dedication! Secondly: you get thrash metal to the core with lots of respect for their punk roots. The one thing I personally always loved about their music, is the very punky feel to their music. Thirdly: you get tongue-in-cheek lyrics about the everyday stuff of the regular working class hero, delivered by the always great vocals of Bobby “Blitz” Ellsworth.

And they did it again, they managed to sound even better and younger than on the former album(s)! As soon as the album kicks off you get knocked over by their sheer power after a nice build-up of the intro of Mean Green Killing Machine. The energetic punk-infused thrash metal will make you want to bounce around the room and storm into a moshpit head first!

That level of punk gets raised even more in Goddamn Trouble! It’s fast, it’s heavy, it’s a perfect metal track to blast through your speakers and go nuts. And that guitar solo is a great piece of showing off the skills on the six-strings. I can already see the crowd shouting along to “Goddamn Trouble!”, we’re only two songs in and I have a hard time sitting still.

On this album, there are also quite some influences from heavy metal. In Shine On there are moments that Bobby‘s voice actually reminds me of Bruce Dickinson and The Long Road was clearly made with Iron Maiden in the back of their heads. Besides these little “homages” there’s also Come Heavy, that was heavily inspired by Black Sabbath and the epic long title track (almost eight minutes!). All of this gives another dimension to Overkill‘s music, that is very much appreciated by me.

Overkill yet again delivered with The Grinding Wheel a nearly flawless piece of thrash metal that will be hard to top in 2017. If you’re a fan of thrash metal and you haven’t tried them out yet, please pick up this album! If you’re not really a fan of thrash metal overall, still give them a try. They might surprise you! And if you get the chance to see them live, I’d urge you to do so ’cause that’s how they convinced me too…