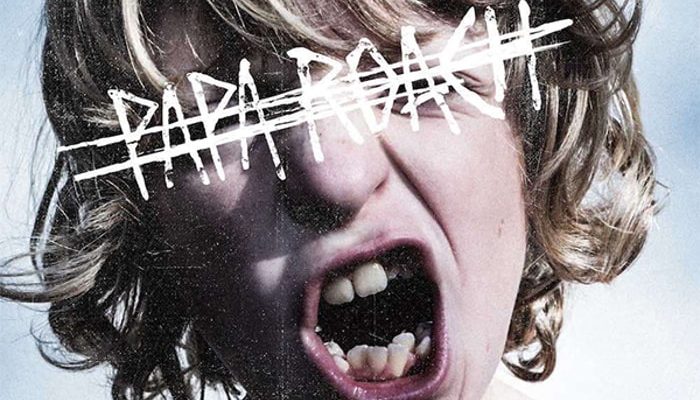 Absolutely youth sentiment for me personally and live always the bomb… Papa Roach is back with album number 9, baptized Crooked Teeth. For those rare rock/metal fans that don’t know who they are by now: the band has been around for almost a quarter of a century but really broke through to the big public with their acclaimed Infest album in 2000. In the middle of the rise of nu-metal they brought us some classics like Last Resort and Between Angels and Insects, songs that are still very popular at parties everywhere. Just like their period colleagues of Linkin Park they didn’t get stuck in that “nu-metal” category and went through some stylistic changes. And while Linkin Park became a huge stadium band, Papa Roach didn’t surge to the same kind of heights but seemed to have kept more consistently true to their rock/metal origins and are still a household name. They’ve never really completely disappointed me with their new work and after hearing their first singles, I have the feeling that they won’t with this one either.

And this is that release that some old-school fans might have been waiting for… Throughout the years they’ve adopted a more melodic hard rock style compared to their rap-centered breakthrough album Infest, but with Crooked Teeth they dug up more of their old style than ever before. Much is credited to the Furlong/Brittain production team who are both a huge fan of that classic release and wanted to work with the guys on an updated version of those classic elements that everyone loved so much 17 years ago. By bringing back some of the fire from those days and infusing it with elements from different genres, they’ve really created what feels like a more adventurous modern version of Papa Roach.

Opening with Break the Fall, they immediately introduce you to this updated blend of rap metal and melodic rock, complete with a backing choir. For me not the best track of the album, but one that peaked my interest even more and will get you curious and excited for the rest of the album. A perfect song to get you hyped up for what’s yet to come! It’s when the title track Crooked Teeth kicks in that you’ll be jumping up with a heartfelt “Yes!”. It’s a highly energetic and more raw track that really takes you back to the good old days of 2000. Is it as surprising or  face-punching frustrated like what we got with Infest? Maybe not, but this is definitely closer to it than we’ve gotten from them in a long time! With My Medication they perfected the combination of both sides of Papa Roach in a track that just screams for you to sing along and its sheer catchiness will get it stuck in your head for days…

For Born for Greatness the guys collaborated with writer/producer Jason Evigan (Jason Derulo, Demi Lovato, Zedd, Maroon 5) and they bring us a pulsating anthem that for once touches a more positive feeling of strength and pride, sticking out between their often more “down” feelings coming to the surface in their songs. Some people might have a bit of an issue with this track since it gets touched more with a poppy sound than ever before, but I still find enough of Papa Roach‘s energy to enjoy it. And live I can imagine this might be a party bombshell with the crowd shouting and singing along. If you already got a bit turned off by this track, I’d suggest you skip Periscope featuring Skylar Grey. Papa Roach have been known for featuring deeply emotional and almost heartbreaking balad-like songs on quite some of their albums and I guess you can put this song in that category. Jacoby‘s matured singing voice proves to be a perfect match with Skylar‘s vocals, delivering a serene and beautifully atmospheric song. Is it too poppy to be on a Papa Roach album? Could be, but the heartfelt emotion and honesty they seem to put in their delivery makes it a stand-out and I commend them for this experiment that is actually a really decent song. But please don’t make a full album with just this style…

Help brings back the vibe of lovehatetragedy and would’ve perfectly fitted on that popular album, which is actually one of my personal favorite releases by them. Another collaboration pops up with Sunrise Trailer Park, this time with the nowadays popular rapper Machine Gun Kelly. Not a bad song, but nowhere near as memorable as the earlier collab or any of the other songs. I find myself easily skipping this one to go to the really strong tracks that close down the album. As soon as Traumatic blasts through your speakers you’ll have forgotten all about the  previous song. With the heavy opening it makes you want to jump up for a moshpit. The flow of the song with the really calm parts in between the exploding choruses is so spot on that this one will grow on you as one of the best tracks. And talking about a track that grows on you: last song None of the Above is a special one that might take some time for you to get used to. Bolstering a more experimental almost Trent Reznor-sound with vocals switching from almost spoken-word to shouting to almost fragile singing this is a most interesting creation by them. What a way to finish… and hats off to guitarist Jerry Holton especially for his work on this track.

Papa Roach still hasn’t lost its touch and delivered with Crooked Teeth an album with few surprises but with much respect to their past (and fans) and a firm look into the future. There might be a few less memorable or desirable moments on the album, but overall it’s a release with songs that’ll appeal to all the different generations of their fans and they show that they know who they are, what they want and how to not stagnate without losing touch with their essence. If you’ve been a fan of them throughout the decades, it’s a “must have” and I suspect it might even convince quite a few Infest purists. I for one am looking forward to catching some of their new songs live at one of the blistering sets they’ll play on their European tour this Fall…