You are here: Home1 / Pick Your Poison2 / PICK YOUR POISON: interview Eutropius Brewery

Bands, festivals and the lot are releasing branded booze by the dozens these days. GRIMM makes it its mission to get to the bottom (of the bottle) of this trend with insightful reviews and extra backgrounds. So sit back, PICK YOUR POISON, and discover all you need to know about your favorite band’s alcoholic brands! Some time ago we published a review of Kataklysm‘s “St. Tabarnak” beer (go here for the article), but we wanted to know more about this brew. So we contacted the brewery behind the creation, Eutropius Brewery, and asked founder Wouter Vermeersch a couple of questions about the cooperation with the band…

How did you end up doing a beer for/with Kataklysm?
One night when my girlfriend was out for the house I tested some samples of a new beer we brewed some weeks before. The beer was quite strong (10,8 abv) because of which I got drunk – yes, it’s such a story. The week before I happened to be on a business trip in the U.K. where I had a beer from a big metal band. Although I liked the band, the beer tasted like absolute crap. I even remember not finishing it. Anyway, drunk as I was that night I decided that my favourite band – Kataklysm – also needed a beer of its own. So after my 3rd triple – still 10,8 abv – I wrote a mail to Kataklysm explaining my great drunk marketing idea. Spelling mistakes included… Not yet 2 hours later I received a positive reply from their frontman Maurizio. We signed the contract for our cooperation 3 months later on Graspop Metal Meeting.

Did the band influence or take part of the creation of the beer in any way? What was their role in it?
The band primarily decided which style we had to brew. As we are a brewery specialized in the development and brewing of custom made beers we created 4 different samples. During GMM 2015 we tasted all of them in their backstage lounge so they could pick the one they liked the most. That was a fun day.

How come you sort of went in a “holy” direction for a death metal band like Kataklysm?
The name has been chosen by the band and the design by the wife of their frontman – who has a design and marketing office in Chicago. Kataklysm is not a band who likes going in the religious direction. Satan & hell is not really their thing. The reason they chose the word “Tabarnak” – coming from the word Tabarnacle – is that the word is used as a common curse in Quebec, Canada. Also, a beer in a bar is often ordered followed by the word Tabarnak. For example: Give me another one, Tabarnak. The prefix “St.” is meant as a joke.

What made you chose going for a rather strong ale instead of something more out of the box, especially with Belgians richness of styles?
The beer had to be as international acceptable as possible. Spicy beers, IPA’s, quadruples,… are always liked by a lot of people but you there’s always a large group of people that get excluded as well. Furthermore metalheads generally do like strong blonde beers… At least every metalhead I know does. Belgian or foreign.

On the matter of working on demand, is there anyone out there you’d love to make something for or get a request from?
I would love NASA to launch one of our tripels into space so the aliens can get drunk on our perfect quality beers! 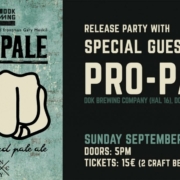