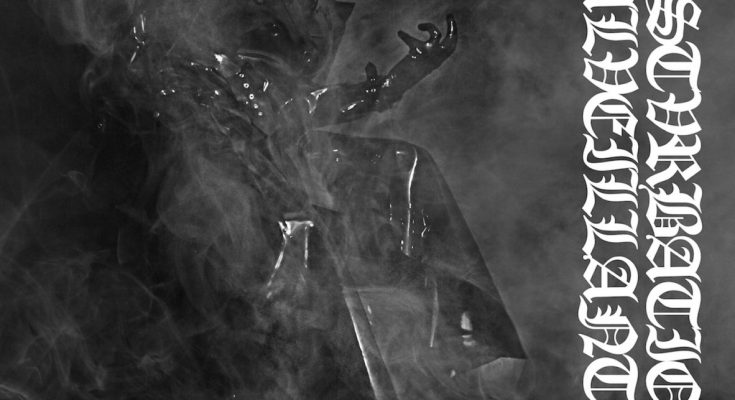 Ever stumble on a band description that had you instantly convinced? Such was the case for me with RVBBER VVITCH‘s ‘Mastvrbations Malveillantes MMXVII‘. Hailing from the Great White North, this one-woman extreme metal project is fascinating to say the least. Describing her solo project’s style as “an unorthodox fusion of BDSM, black metal, dark ambient, industrial, and experimental”, RVBBER VVITCH was bound (pun intended) to turn some heads in the underground scene. Originally recorded in 2017 and released on digital format in 2019, the album was consequently picked up by the Finnish satanist purists label, Werewolf Records, who gave it a physical release earlier this year.

Now with that in mind, I figure the effort is clearly meant to be appreciated as a kind of contemporary arts performance, rather than solely for its musical aspect. Something ideological to be lived and sensed, so to speak. Yet despite not being able to experience it as I suppose was intended, the release still left a strong impression on me and I believe it deserves your attention.

There’s a lot to enjoy for the extreme metal fan. Black metal riffing is the main player on ‘Mastvrbations Malveillantes MMXVII‘. Think early Anaal Nathrakh. Coming at you like a hellish firestorm, the destructive grinding wall of sound never seems to reach an end. The gist of the album is a fast, frenetic pace, although some respite can be found at times when slower parts act like a safe word in the midst of delightful auditory punishment. Blast beats are a big part of the soundscape and work together with guitars and overly distorted bass lines for a more intense onslaught.

Now, I’m not against using drum machines but their programming has to fit with a certain play speed. I’m reminded of Zebadiah Crowe‘s ‘Host Rider‘, which I reviewed last year. They make use of a drum machine to complete their sound, giving it a brash industrial feel you wouldn’t necessarily get with a live drummer. It befits their sound given they keep the tempo on the low side. It is my experience that, the faster your bpm, the worse a drum machine will sound to the trained ear. Take the Japanese brutal death metal one-man project Ayakasi Kagura, for example. Music’s great, except… there’s so much artificial stuff going on, it’s close to sounding like a low-drop 8-bit boss fight. Hell, maybe that’s what he was going for.

RVBBER VVITCH succeeds in invoking that same industrial vibe, yet also fails to avoid the missteps of using drum programming. Good fills are rare and some transitions sound awkward. The snare sound isn’t always as organic as you’d want it to sound either. You’re bound to notice these flaws since they’re quite frequent in every lengthy track, but you can get past them easily as the rest is just pure gold. The instrumental cohesion truly delivers a more than satisfying result.

Apart from her overall aesthetic, RVBBER VVITCH‘s vocal delivery will leave just as deep a mark. Since no lyrics are available, I can only guess at the subject matter, but if the manner in which it is spewed is any indication we’re tackling some dark stuff. At times I even wondered if smouldering demon pits would suddenly start dotting the earth upon hearing her heavily distorted French incantations being screeched and growled in all manners of frenzy.