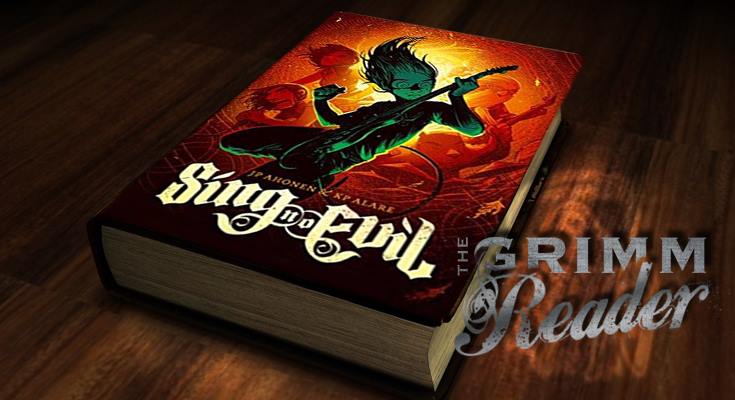 The graphic novel Sing No Evil tells the classic "coming-of-age" story of a passionate guy trying to make it with his band. It's set in THE country of metal, Finland and at first glance this might be nothing too special really. But the slow build-up of the story combined with absolutely excellent graphics, a touch of fantasy and all the small little details interwoven in the book made it one of my favorite comics to date.

The story immediately starts with a bang, showcasing one of the biggest strengths of this work. You enter the dreams of central character Aksel, the stuttering perfectionist frontman of the avant-garde progressive metal band Perkeros (the original title of the Finnish language edition), and get to see one of the first gigs that are in the book. The amazing drawings translate the feelings and sounds that go along with a live show so damn well that it's as if you're actually there. They managed to make the music visual, which is a pretty cool thing!

At first it seems like there isn't much of a fantasy element to it at all besides that opening sequence with the dream. Which changes slightly when you get to meet the rest of the band. There's Lily the keyboardist, Kervinen the bassist (who seems to have been around for longer than a normal human life) and especially Bear the drummer cranks up the fantasy by being an actual bear... Like mentioned earlier, the story mainly revolves around these characters and the struggle to get the band anywhere near the start of success. They seem to get a touch closer by letting Aydin the pizza-delivery guy join and let his voice complete the magic and visions that the music of Perkeros brings upon you.

That the creators of this book have a real eye or knack for details brings the story to a whole other level. Their personal love for heavy music seeps through when they include lyrics of songs by for instance Protest the Hero and Pain of Salvation when Aydin belt out a few lines. And you get a more real world feeling with all the small touches to clearly place you in Finland: from the beer brands to the television channel logo used during a news broadcast to the name of an actual existing club in Tampere.

Lastly, there's the fantasy in the story. I've seen quite some people complain that there isn't enough to be found in it or that it comes too late. But personally I like the fact that the build it up so slowly. You get to know the band, the setting, some of the background where they explain the hidden power of music and start to get a connection with all the characters. So when the fantasy/horror element finally kicks in, you're in it for the full 200%. I don't want to reveal too much and spoil the surprise, but I love the final showdown with the "evil" hipsters who have been popping up throughout the book every now and then!

In short, it's a great graphic novel when you're a music fan yourself and like it when a story gets properly told and builds up towards a certain end goal. With amazing artwork that really sucks you in, you'll find yourself reading this in one sitting pretty easily!

...one of the tracks sung by Aydin in the comic!