Home Hardcore The Impericon “Never Say Die” Tour is back in Europe again this Fall! 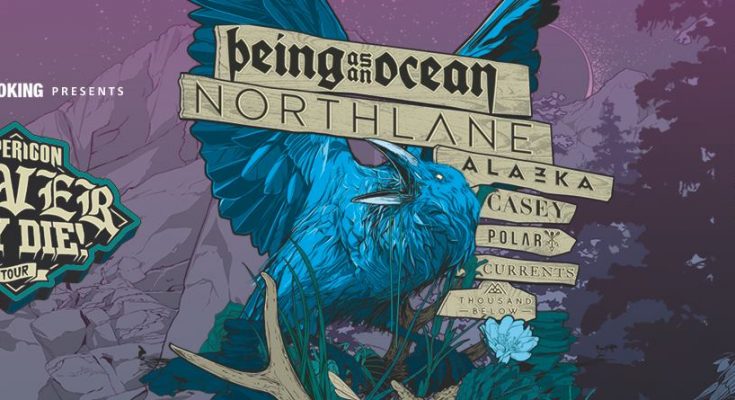 The Impericon “Never Say Die” Tour is back in Europe again this Fall!

It’s back – the IMPERICON NEVER SAY DIE! TOUR enters it’s 12th round in 2018. Europe’s biggest festival club tour proves again that it’s got a keen eye and ear for the best scene bands in the world. With Australian metal-core chart-toppers Northlane and melodic hardcore pioneers Being As An Ocean, you have two incredible high-profile headliners. Rounding out the line-up this year are up-and-coming scene favourites Alazka, Casey, Polar, Currents and Thousand Below.

When the first Never Say The Tour started way back in 2007 (kicking off with a still largely underground line-up consisting of today’s scene greats Comeback Kid, Parkway Drive and Cancer Bats), no one could guess the important influence the festival tour would have on the careers of its bands. One thing is clear: Be you Whitechapel, Northlane or even Parkway Drive, for them all, their worldwide careers began with support slots on the Never Say The Tour. Trust us when we say if you want to discover the new groundbreaking bands of the moment then do not miss this 21-day festival tour!

Over the years, BEING AS AN OCEAN have always remained experimental maintaining an openness for further expansion and growth of their sound. New elements have continued to flow into their music, including electronic samples, indie-rock passages and even clean vocals. It’s a potent mix and one that’s continued to see their success expand with each new release and tour.

“We are so excited to be teaming up with Northlane to bring you this year’s Never Say Die Tour! We did this tour with The Amity Affliction and Defeater in 2015; it was one of our favorites then and it’s only going to be more special now.”

– Tyler Ross / Being As An Ocean

Since their foundation, NORTHLANE have rapidly developed into an immense crowd puller on several continents. The Australians gained their first live experience in Europe back in 2013 and since then have followed on with a number of successful tours and two successful albums. Their most recent studio record, “Mesmer“, was released in 2017 to widespread critical and commercial acclaim and was recently followed by a rousing live album “Analog Future” in 2018. Their incredibly responsive fan-base can’t get enough of their homogeneous mix of melodic (but also progressive) metal coupled with an unashamed pop sensibility. Worldwide chart success and a never-ending commitment for innovation on their social media channels underscore their status and make them a phenomenal headliner for the UK dates of the tour.

“Never Say Die! was the first time we ever had the chance to tour in Europe and the UK, all the way back in 2013. To have the chance to come back and perform, as a headliner was an opportunity we could not refuse. Some of our greatest memories were made on NSD, the touring festival is an unmissable event on the calendar for bands and punters alike and we can’t wait to come back and do it again”

Germany’s ALAZKA are already NEVER SAY DIE TOUR veterans thanks to their appearance under their old name (Burning Down Alazka) as tour opener way back in 2015. The past 3 years have been quite explosive for the band, their career has sky-rocketed thanks to tours alongside PARKWAY DRIVE, countless festival appearances as well as a recently completed (and in many places sold out) co-headline tour with WE CAME AS ROMANS and their first tour of Japan. They dropped their stunning new album “Phoenix” last year and changed their name to ALAZKA and are now more than ready to take on the world!

Four other international bands complete this year’s line-up. CASEY are already considered by many in the UK music press as one of the island’s most important new guitar bands and build a bridge between Hardcore and Shoegaze on their current album “Where I Go When I Am Sleeping“. American metal upstarts CURRENTS, with their intricate song structures and crushing riffs will provide an exciting shift along with POLAR whose biting take on hardcore, punk and metal is sure to get everyone slam dancing from the outset. THOUSAND BELOW from the USA have already proven their mettle in their home country and are more than capable of providing an impressive introduction to the tour.

“This year we’ve pulled together a line-up of incredible bands that really cover all the corners of what we want NEVERY SAY DIE! to stand for, intensity, passion and diversity. We truly believe the 2018 line-up delivers on those themes in spades!”

“We are very proud of the line up that we will have on stage this year. It represents exactly what we wanted. Variety, variety, variety! We have everything here: from Djent to Metalcore to Hardcore in all its facets. With this line up, it will be a unique tour that will be talked about for a long time to come.”

This year we’re teaming up again with Hope For The Day, whose founder Jonny Boucher can hardly wait for the tour:

“For us, the Never Say Die Tour is a great way to spread our message every year. On such big, Europe-wide tours you get around a lot and have time to talk to people. We offer a lot of information around the topic of suicide prevention – and there is no better place to reach teens than on such a tour. I am glad that Impericon and Avocado Booking give me this opportunity and support such an important issue!”.

Already on the last NEVER SAY DIE! TOUR Jonny spoke from the stage to the audience about his project and the message that it is no shame to seek help when suffering from depression. “It’s okay not to be okay”.