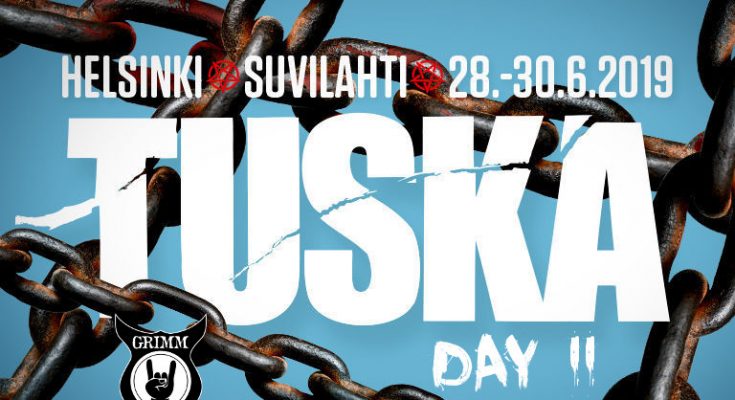 The second Tuska day was also completely sold out, which wasn’t too surprising since the headlining show was the last ever Finland show of the legendary thrashers of Slayer. I have to say that I was impressed with the organisation. They actually listened to all the feedback they received on social media and such and tried to adjust as much as possible overnight still. This meant more coat room space, numbers on the band shirts to make things go smoother, better signalization, more access to toilets to reduce the waiting lines,…

All of that was actually noticeable even though it was as busy as the day before. Somehow we managed to get food without having to line up for at least half an hour and circulation seemed a lot smoother. Merch was still very much a problem (hence the not having been able to buy a single shirt) and getting from the main stage area to the other stages was still tricky when a popular band was playing there. But all in all I was pretty impressed with what they tried to accomplish here during the festival weekend itself to make the experience better for everyone.

Due to an interview in the center of Helsinki with the pagans of Heilung, I arrived too late to the festival grounds to catch the great industrial metallers of Fear of Domination and the heavy rockers of Sata Kaskelottia.

So the first band for me to see this day, was the ever popular Finnish thrash band Lost Society. They’ve been growing steadily into a household name in the country of metal and are steadily branching out to the rest of the world. Their recent single ‘No Absolution’ sees them taking a next step in their career with an even more infectious and catchy sound than before. It was clear that these young guys are very beloved in their own country, looking at the mass of people gathering in front of the main stage this early in the day. One thing you’re never short on at a Lost Society show, is relentless energy. They dance, jump, shout, try to rile up the crowd, start a wall of death,… Besides that, they’re an incredibly thankful bunch, being amazed at how many people showed up for them and loving all the support they get.

On the small stage an up-and-coming Finnish band set up shop. Wake Up Frankie won the Tuska Torstai competition, giving them a much coveted spot on the line-up. They bring an interesting mix of old school thrash and modern metal and their grooves at times make me think a bit of bands like Pantera. As opener for their show, a weird looking character showed up which I presume was Frankie himself. After he sat around a bit drinking, he picked up his boombox and moved back to the backstage so that the band could kick off their show. Loads of green (is a returning bit in the band’s image) and a lot of energy is what we got. A nice discovery, a band that holds a lot of potential for sure.

We had to skip the gloomy rockers of Maj Karma and the Finnish cult band Mustan Kuun Lapset because we took part in a little guided tour for press, led by Tuska‘s CEO himself. Ending up at the side of the main stage when Stam1na was about to kick off their show, was pretty cool!

Stam1na is one of those bands you can catch at almost every single festival during Summer in Finland. We have to say though, no matter how often you see this band, it never takes away from the greatness that they bring to the stage. Hair flying through the air, heavy music, high energy,… you always know what to expect from them. Their latest album ‘Taival‘ added a whole bunch of great songs into the mix, of which especially ‘Gaian lapsi‘ has been played overly much on the radio. It was pretty cool to see that they brought guest vocalist Anna Eriksson with them to perform that track live the way it was recorded.

Despite totally not being a power metal fan, I still wanted to go check out Warkings. This international band has a backstory going that all of them are kings of war, fighting against the enemies of true metal. How much more cheesy can it get, right? But I knew that the show would be great fun to at least check out for a couple of tracks with all members being dressed up in different outfits and masks. A Spartan on drums, a Viking warrior and a Crusader on guitars and a Roman tribune belting out war chants. No matter the music, these guys know how to put on a great show and the fact that they regularly seek connection with the crowd only helps this.

Last time I saw Kvelertak, was on the exact same stage at Tuska 2016. Back then they still had their old vocalist Erlend, who was a beast on stage. So I was really curious to see if they could match the energy of that performance with their new vocalist Ivar in the ranks. And man, did they…

The band itself has always been very energetic and engaging on stage, but it’s the vocalist that pulls it to an even higher level. And with Ivar they have someone that actually can live up to the legacy of his predecessor. He was rowdy, boisterous and went for a “classic” Kvelertak crowdsurf early in their set. Great to see that an epic live band like Kvelertak hasn’t lost any of their feathers with a slight line-up change! Looking forward to see and hear more of them in the future.

Next was a moment that could have been a time to make hard choices since both Sick Of It All and Vision of Atlantis started at the exact same time. For me personally I didn’t have to think twice about it. Having been a big hardcore fan, being able to see the New York Hardcore legends Sick Of It All live is a chance I was not going to give up on under any circumstance! And it was clearly the good choice to make… They came, saw and absolutely conquered! Hardcore is all about family, which was shown with wives and a kid standing (and in the kid’s case, at times dancing) around at the side throughout the show.

The band itself has been going strong for over 3 decades and seem to have a never-ending supply of energy, especially the brothers Lou and Pete Koller are a pleasure to see on a stage. With vocalist Lou going back and forth like a lion in a cage and guitarist Pete jumping and running around as if he swallowed a damn spring coil! The moshpit was constant, which is not a to be diminished feat in Finland where the people are often more reserved.

The next couple of hours were spent on doing interviews, getting some food and some well deserved rest. We did catch a bit of the Delain show, in which they proved to be a band that is gaining a lot of popularity for a reason. Despite the recent departure of their guitarist Merel, it seemed as if nothing was different and played as solid as ever.

On the small Inferno stage, the Finnish technical death outfit Delirium’s Order set the room ablaze with one of their rare live shows and as backdrop for our dinner we had the soothing proggy tunes of Opeth. And the last band of the Inferno stage, Japanese heavy metal outfit Loudness, brought another packed house with a rare appearance in these regions.

A show I had been looking forward to ever since they were announced for the 2019 line-up was most definitely Heilung! These pagan warriors have been grabbing my attention for years and I’m happy to see them finally getting recognition as well as shows all over Europe. As always they started with a praying circle to bless the ritual that was about to take place. After that the rhythmic drumming started pounding and took the completely packed tent on a magical trip back into history. The pagan warriors appearing on stage danced, shouted and pointed their spears, slowly creeping closer to the crowd, ending up in a dancing pit with everyone there. It would have been a truly perfect show if there hadn’t been those typical loud, mostly drunk, festival goers that were too far gone to understand what was going on. Hoping to see them some time in the nearby future in a setting and with a crowd that is completely catered to what Heilung is about.

And then finally there it was: the show that most people at Tuska had been looking forward to for quite a while most likely. The fires got lit on stage under the all too well known Slayer band logo and the band strode on stage greeted by a very welcoming roar coming from the crowd. I’ve seen Slayer a couple of times throughout my life with varying success. Seeing them in the middle of the day at a festival has always seemed a bit weird and I’m happy to see that this influential band got the recognition they deserve on their last run by getting quite a few headline spots at several festivals.

And clearly it worked in their favor, since this was the best time I’ve seen Slayer. They came, they saw and they absolutely destroyed. At times it looked like the gates of hell itself opened up to the evil tunes of their songs. Also the setlist seemed more interesting than usually with some rarely played live old school gems to be found like ‘Gemini‘ and ‘Black Magic‘ besides the standard classics like ‘Raining Blood‘, ‘Angel of Death‘ and ‘South of Heaven‘. A band with a career like Slayer has plenty to choose from.

One thing that wasn’t maybe the best, was the interaction between the band members themselves or even with the crowd. They all stood ground on their spot on the stage and that was it. Gary Holt came more forward to shout to his fans, but the rest stayed mostly where they were. But all that was easily forgiven when they came to say bye to Finland one last time in an emotional moment. Especially when Tom Araya stayed behind a bit longer to keep staring at his fans, obviously very emotional. Thank you for this end worthy of a metal legend!