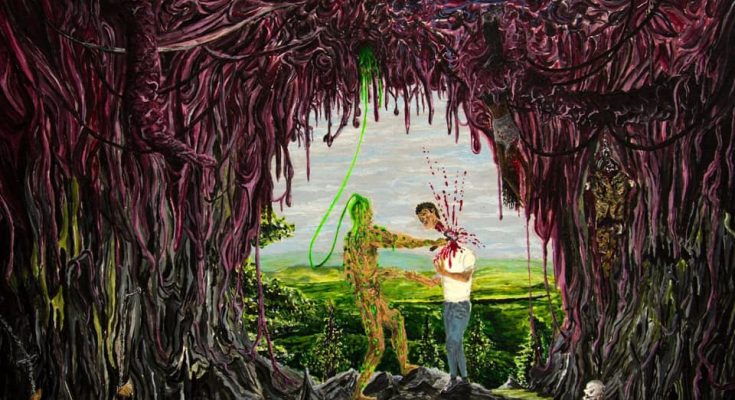 With the recent hype from the internet surrounding the release of the first full-length album of the U.S. death metal band Undeath, ‘Lesions of a Different Kin‘ delivers a brutal slab of rotten death metal. Since its formation, the NY-based quintet released two demos ‘Demo 19‘ and ‘Sentient Autolysis‘, a compilation and a split album with the Italian death metal band Devoid of Thought, all released in 2019. Undeath were quickly spotted by fans of death metal with their compilation release ‘The Compilation of Decomposition‘ and the live album ‘Live from Hell‘, both released on cassette. In 2020 the band signed a worldwide deal with Prosthetic Records and it was only a matter of time before the band released its first full length album. Undeath brings a fresh rawness to the genre of death metal although their music offers a wide variety of riffs. Played with excessive grooves they sound like a crossbreed of Cannibal Corpse, Hyperdontia and Undergang. The seamless combination that encapsulates the songs reeks of foul guitar riffs and low cavernous growls. ‘Lesions of a Different Kind‘ doesn’t sound like your typical old school death metal or the trend that has been conquering the underground scene. In fact, the band is characterized by a varied style of focused riffs, stripped from melodies and rhythm.

Although the direct influence from bands such as Incantation and Hyperdontia is dominant, they do mix the organic forms of old school death metal in their own way. The guitars on the album sound crusty and uncharacteristic with the bass guitar pulsing continuously, creating an inharmonious resonance. The album kicks off with ‘Suitably Hacked to Gore‘. The first thing to notice here is how the bass guitar works in conjunction with the drums. The low, guttural growls produce a filthy sound which adds to the song texture, giving you an alien kind of feel. However, the band brings more varieties to the listener: on the third track ‘Lesions of a Different Kind‘ the guitars ooze with a putrified sense of disgust even though each riff is meticulously written.

While the grinding beats of the drums are powerful and flexible at the same time, Undeath‘s song structure is mainly centered on a mid-tempo. One of the peculiarities about the album is that the drums eschew unnecessary blast beats and this somehow makes their songs complex and dynamic. The down-tuned bass guitar along with the Suffocation style of riffing shows the inspiration from the NY style of death metal. The riffs on ‘Entranced by the Pendulum‘ emphasize the old-fashioned technicality. However, on this track the pace of the drums feels faster than the previous tracks.

Closing at thirty-six minutes ‘Lesions of a Different Kind‘ gives huge prominence to the riffs. With tracks like ‘Acid Twilight Visions‘ the band offers some of the most complex riffing methods I’ve heard this year. At times Undeath sounds groovy, then switches to full extreme brutality just to shift again to tangled complexities. A fine example of this is ‘Lord of the Grave‘. Their approach demonstrates a perceptive and highly intelligent level of songwriting that adds an exotic aspect to the album.

Undeath on their first full-length album provides us with something rotten where most of their riffs and song structures have been carefully selected. ‘Kicked in Protruding Guts‘ maintains that raw old school tone with pulverizing drums kicking with the heavy bass guitar. The spewing riffs are carried out by intense grooves. The guitar chugs are played with a thick heavy tune. ‘Phantasmal Festering‘ creates a brutal and cavernous sound where the band plays in the same vein as Rottrevore‘s trademark style. On the following track ‘Chained to a Reeking Rotted Body‘ the drums combine crushing double bass and blast beats. While most of the quality is produced by the guitars, they shift from one tempo to another by showcasing an impressive level of coherency.

On their debut album Undeath has extracted many inspirations from Danish death metal as well as influences from nineties U.S. death metal. The album is full of killer riffs, topped with a putrid atmosphere of thick heavy grooves and sick guttural growls. For this reason, the album will appeal to fans of Undergang and Hyperdontia. ‘Lesions of a Different Kind‘ has lived up to the hype. This is without a doubt one of the spectacular releases of the year 2020.

One thought on “Undeath – Lesions of a Different Kind”