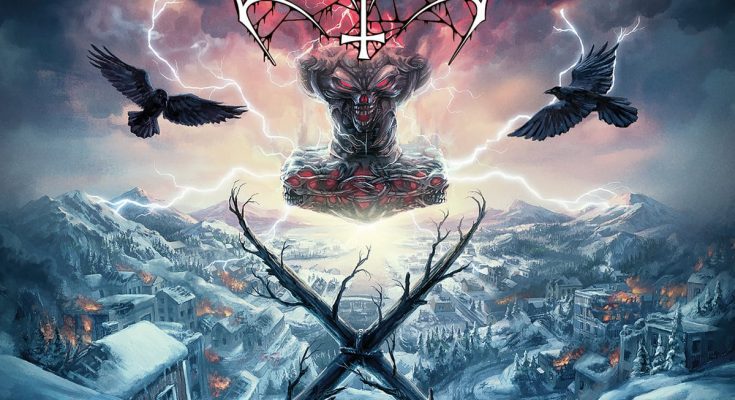 The warriors of Midgard strike back once again, and this time their quest is more precious than ever. The Hunt for White Christ is where Unleashed continues with their story of Odalheim and the Norse mythology. The Swedish battalion with the Viking influences celebrates their 30th anniversary and The Hunt for White Christ is their 13th album which was recorded at Chrome Studios. Unleashed was formed by vocalist/bassist Johnny Hedlund in 1989, their debut album Where No Life Dwells is one of the best old school death metal albums that was released back in 1991.

The band has gone through many musical changes, their 90’s era was partially good but the band have faced some static periods. But with the release of their 2006 album Midvinterblot they had in my opinion a turning point in the band’s musical career. Unleashed is undoubtedly one of the prime examples and original bands when it comes to death metal. And while many old school death metal bands swagger with buzz-sawing guitars, Unleashed have honed and sharpened their riffs. There are certain thrash and heavy metal elements which are instilled into the song structures of the new album. Their musical style has always been explicitly raw and powerful, thus they don’t rely on blast beats to attain brutality.

The lyrical contents are mainly related to the medieval eras of Norse mythology. The music on the other hand reflects the epic battles of these warriors, and this is how Unleashed conveys these soundscapes into raging death metal. The Swedish veterans continue to impress their fans with albums such as Hammer Battalion Unleashed which was a great mixture of death and thrash metal. Odalheim was overly influenced with black metal and finally Dawn of the Nine which was released in 2015. Was another fair output of collective elements from the past records, that brought the classic sound of Unleashed with power of roaring thunder.

The Hunt for White Christ is their first album to be released under Napalm Records as the band once again blends the Scandinavian metal into the new songs. But this time the band has raised the performance to unprecedented scales and variety of riffs. The Hunt for White Christ continues where Dawn of the Nine left off, many fans can actually sense the musical evolution in the band. Unleashed has always maintained their strength, the straight-forwardness and the crude assault of their chugging riffs are more focused this time. The massive opening Lead us into war is carried forth with vehemence and power, the band always emphasizes on violence and galloping death metal style. And with such startling performance of the storming guitar riffs and bludgeoning drums, Unleashed makes a bold inauguration to the album.

Seemingly the band has developed their musical mechanism and skills, the second track “You will Fall” presents some fresh ideas. The strings add a great ingredient to the song, creating a sinister atmosphere. Fredrik Folkare (Firespawn) and Tomas Olsson display a quality of performance when it comes to breakneck speed solos. Stand Your Ground is a galloping death metal track executed with immense guitar riffs. And besides catchy choruses, the guitar sound is crisper if you compare it to the previous album. The Hunt for White Christ is well structured and accentuated with high level of musicianship, the new tracks proceed with excellent death metal aggression. Literally the album offers more than what I had expected. Johnny Hedlund signature growls are definitely above the ordinary level, the drums are pounded at rapid rate.

There is a lot of variety in the musical contents of the album. “Gram” for example is delivered with high intensity, diluted with blackened metal riffage. Terror Christ is another epic track carried out with electrifying riffs and powerful blows of the battering ram. In ancient Scandinavian language Jorsala was the name for the city of Jerusalem, The City of Jorsala Shall Fall is one of their faster tracks that reminds me of their previous albums like Hammer Battalion Unleashed and Midvinterblot. There is a lot of old school vibe in tracks like Vidaurglemthul and it clearly shows that the album is more accomplished with faster pace, powerful riffs and dramatic solos.

The Hunt for White Christ is unleashed with fury of blast beats, and sweeps with cold icy riffs and sudden swifts of the sharp solos. The eponymous track is only two minutes long but it’s delivered with standard acuteness. The Hunt for White Christ is an excellent follow up to the Dawn of the Nine. After all these years the Swedish veterans still stand as one of the biggest acts in Europe, proving once again that they have more tricks up their sleeves.

Release Date : October 26th, 2018
Label : Napalm Records
Track list :
1.Lead us into War
2.You Will Fall
3.Stand Your Ground
4.Gram
5.Terror Christ
6.They Rape The Land
7.The City of Jorsala Shall Fall
8.The Hunt For White Christ
9.Vidaurgelmthul
10.By The Western Wall
11.Open to all the World