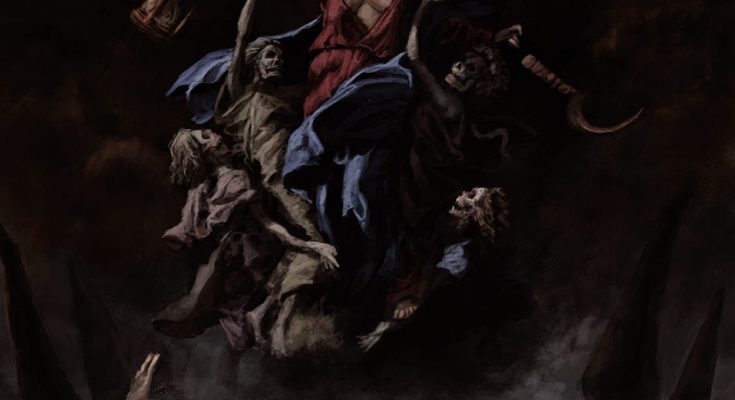 In the wake of the current trend of death metal bands there have been a few groups that took the U.K. underground metal scene back the glory days. With a number of qualitative outfits like Cruciamentum, Grave Miasma, and Vacivus who have formed an unholy trinity. The British quintet death metal band returns after two years of releasing their sophomore album Temple of the Abyss. The latest album Annihilism delves further into the cold and murky sound of death metal. The band has left a huge impact with their second album, in a seemingly continuous direction towards atmospheric death metal. Vacivus latest offering is another drastic development of perfecting their concept of death metal. Although the band has stayed true to the foundation of the old school death, Annihilism reveals a solid interpretation of dense and grim atmosphere.

After a short intro “Post Templum” of eerie sounds that works as a suspenseful interval. The second track Of Ruinous Essence is applied with hypnotic chords when suddenly the outburst of the opening riff and guttural growls gush out. A thick atmosphere befalls with a heavy riffage and blast beats issues forth. Brooding gloomy melodies, hooks and crushing guitar tone that fills the atmosphere. The guitars activate the tremolo pickings and the twisted solos highlighting the track. Vacivus provides an accurate musicianship on the third outing and there is more understanding of their craft. In this sense they use a unique formula which now has become a vital part of the band’s musical alchemy. It is important to state that Cruciamentum and Vacivus together draw a similar attribute to each other.

In fact they both weave an approximate sound and orbit each other like how the Earth moves around the Sun. This doesn’t mean that both bands are identical in sound, Vacivus has managed to stimulate different styles due to skillfulness. The brutal growling and the tremolo pickings are fitted to the general music. On Temple of the Abyss the British quintet combined the elements of black/death into the song structure which resulted into a unified sound. Boasting high standards of ferocious death metal, the third track Terminus proves how Vacivus evolved over time and managed to solidify the song layers making them murky.

The black metal style of rapid tremolo pickings are mainly followed by a surge of blistering blast beats. These modalities that makes the atmosphere thick, gloomy and abyssal are surmounted by blazing riffs. The impenetrable potent riffs are once again processed on Shards while the demonic shrieking which are akin to black metal are used in specific moments. Ghoulish growls that powerfully echoes with frenzy driven riffs and the drums relentlessly unleashing series of blast beats. Expanding to further levels of crushing death metal, Vacivus has been growing into a beast honing the riffs while the growls have been deepened and they absolutely sound inhuman!

The approach to cavernous and abysmal riffing on In Fine Dierum shows the intensity of the guitar department in harnessing the sense of brutality. Delivering one massive riff after another the slower tempos aren’t less brutal either, the rapid alteration of tempo results into climax. And the rumbling growls how they reverberate as if they echoes from the cavernous depths of abyss. The churning atmosphere are formed by the guitars whilst the undertone chaotic solos are fired.

Annihilism is massively overwhelming track centered upon heavy crushing riffs. Building on dynamic tempos the drums ability to wield power in mid tempos to fast. From the vocals capabilities which gives enough depth to the tracks to shine, those who are familiar with the band’s previous work will certainly appreciate the effort on the latest offering. Apart from the dark churning atmosphere and the eerie melodic hooks which are featured on Indignus. Annihilism includes plenty of shredding riffs, soaring solos and segment of modern black metal that provides versatility to the album.

The sonic transcendence on the closing track Ecdysis displays a wider emphasis in creating menacing melodies. The overly dense atmosphere in the mid tempo is followed by the crushing drums, double bass and mystical lead guitars. Finally I can say that there is a huge transformation in sound and cohesion which have been successfully achieved by the band on the newest album. Annihilism is likely going to satisfy the fans of death metal who have waited for this album this album, this record is becoming a regular in my playlist.