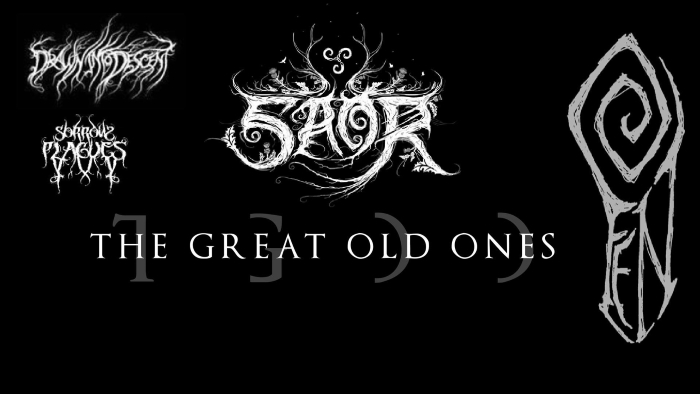 1
Sometimes you follow a band online already for over several years and you just dream of seeing them live one day. Especially in black metal this can often be the case with these unknown one-man projects recording in their own private little studio or basement. They release several amazing records, but you don't see any intention or progress in bringing their music to the audiences. This might be due money constraints or practical implications of creating a band around your own personal project... And then suddenly you see this announcement on Facebook that somehow it is actually happening. A band is being put together, money is being invested and they are looking for locations to play abroad. You just hope someone in your area picks up the call. It is thanks to 5 Shades of Black that we had the chance to head over to Kavka in Antwerp to see the Scottish Saor live. And there was even more. To complete the line-up we were treated with the support of Sorrow Plagues, Drawn Into Descent, Fen and The Great Old Ones! Prepare for a night of supreme atmospheric black metal with us.
If the presence of Saor was not unique enough for you, the night got kicked of by another originally one man project from the UK. Sorrow Plagues (****) is the brainchild of David Lovejoy and released two full albums and several shorter EP's so far. For the live rendition of Lovejoy's music he brought three other musicians with him. Being the first band on the bill Sorrow Plagues was greeted by quite a full hall. At its core the music is atmospheric black metal, but its characterized by influences from shoegaze to more ambient post-rock. The ferocity of the black metal is interlaced with slower build ups of piano, creating ethereal soundscapes perfect to close your eyes and just sway to the music. In another song Lovejoy proves he dares to leave the traditional paths of black metal with melodic bridges that are typical for another type of one man YouTube projects, namely instrumental progressive guitar magicians (think for example the Polish Widek). It is sometimes bewildering to see how he pulls it off, but Lovejoy manages to blend unexpected genres to create an exquisite listening experience. To top it off, this was the band's first show outside of their home country. I wouldn't mind seeing them again for sure. 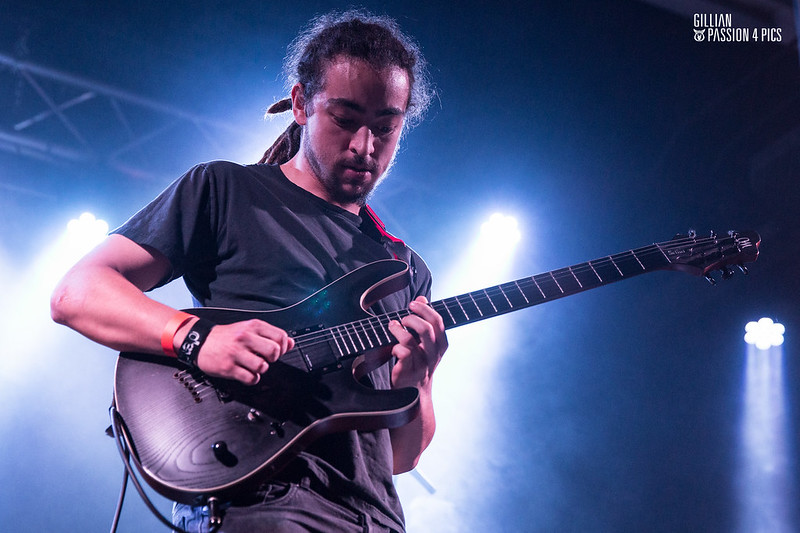 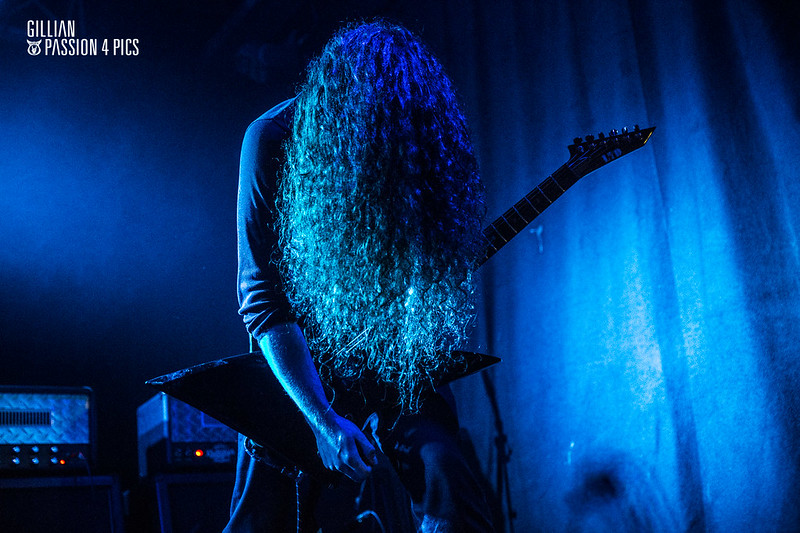 Those who follow GRIMM for a while now should already be familiar with the Belgian band Drawn Into Descent (****). We were highly enthusiastic of their self-titled debut album (review in Dutch) and we were happy to have them play already at some of our own events. Founded in 2013, they released a very strong debut in 2015 and now they seem the standard for atmospheric black metal in Belgium. Because of that, you run the risk of seeing this immensely talented band too much. However, their long and elaborate melancholic tracks never get dull. Adding a touch of the depressive spectrum of black metal with the eerie grave voice reminiscent of bands like Austere this band calls for introspection. At other times they just play relentlessly fast paced black metal. They don't put much effort in communicating with the audience, risking to lose the personal experience their live show offers. This band is at a lonely height here in Belgium in my opinion. 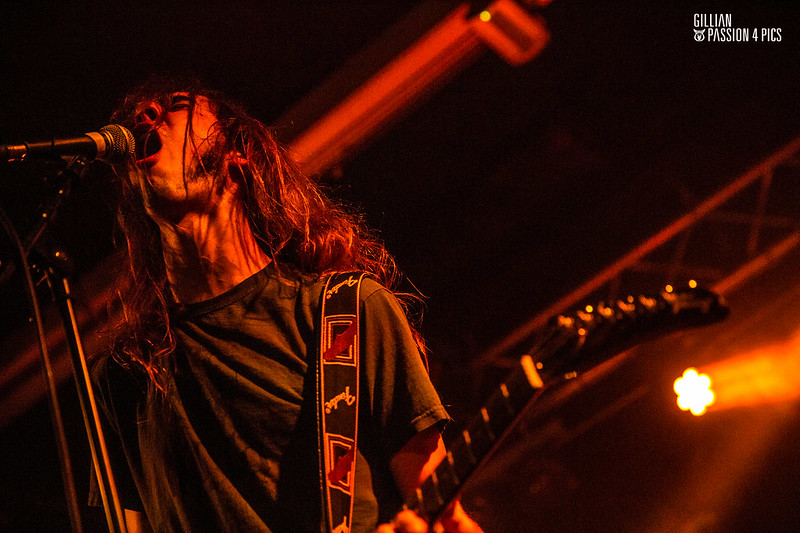 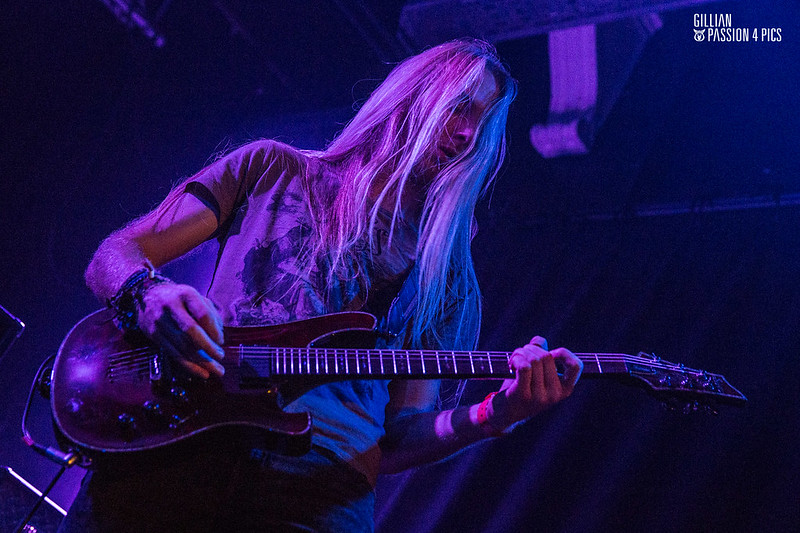 I feel ashamed, but I had to admit I never had looked up Fen (****) before their show tonight. The band has quite a connection with Belgium, though. Apparently, their third show ever was in Belgium somewhere in 2008. Beside that, also the Belgian beers seem to draw Fen closer to Belgium as we stumbled upon 'The Watcher' and 'Grungyn' in the renown Kulminator beer bar close to the Kavka venue. However, the interesting talk that sprouted from that encounter is something we will save for our Pick Your Poison column... With three musicians on stage Fen was the smallest band of the evening, but they still manage to produce an immense and varied wall of sound. The main cause for this is vocalist/guitarist The Watcher that plays very intense and at the same time really technical. He runs around giving himself space to headbang, constantly clicks and adapts his many effect pedals and unleashes a brutal ferocity with his vocals. We saw the sweat dripping from his elbows. Bass player Grungyn weaves his intricate bass lines over it and reinforces the vocal lines when necessary. When the band takes a breath with a more down tempo melody, drummer Havenless  fills in with diverse softer drum patterns. There is never a void and there is always something interesting going on on stage. Fen is a pleasure for the eye for those who love a technical and progressive style of playing and a feast for the ear for those who want to explore the desolate wasteland the band creates musically. 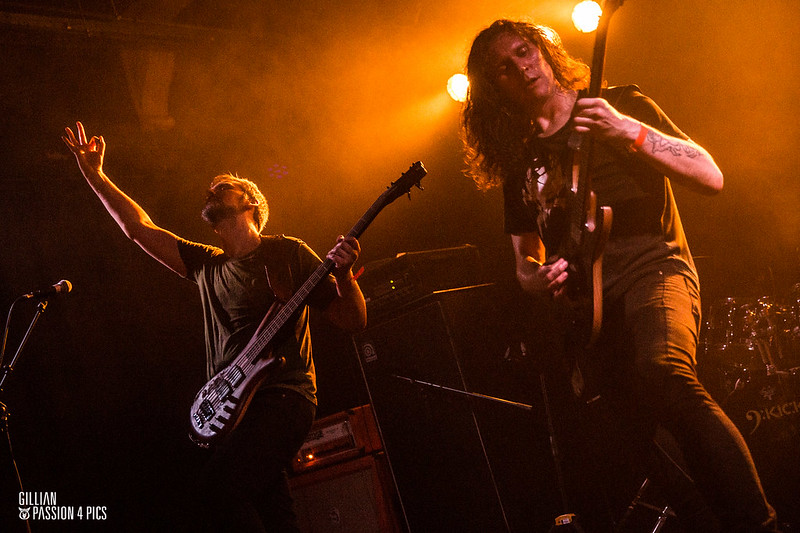 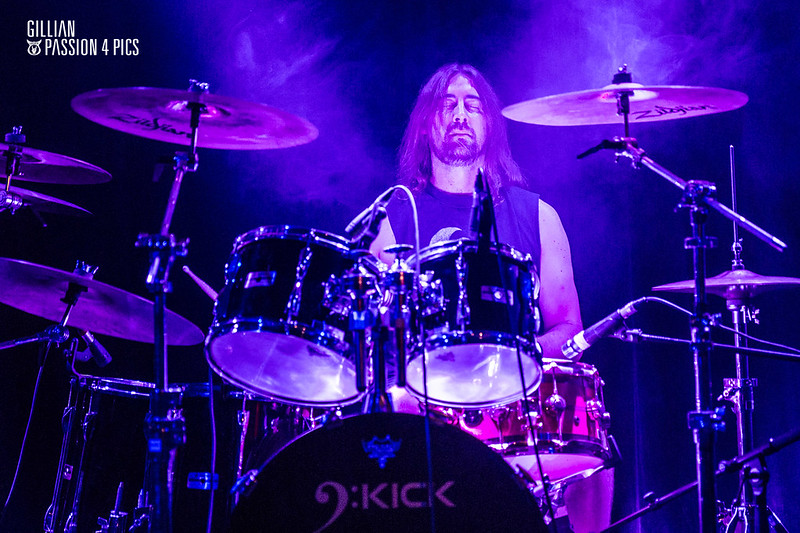 Without a doubt the most brutal assault of black metal came from The Great Old Ones (****1/2). Five bearded men, wearing black hoods and shirts with the same impressive pendant. Adding an extra guitar, this French band brought a triple guitar attack. Unfortunately the second microphone was inedible at the start, but this problem got fixed throughout the show. Inspired by H.P. Lovecraft, The Great Old Ones set a mystical atmosphere, but with a threatening character of impending doom. Inciting, pounding drums and slower build ups never last as the ferocious black metal is unleashed on the crowd. Their show was relentless. It drew you in, only to leave you behind baffled at the end. A flawless show without any lows. For many the highlight of the evening. 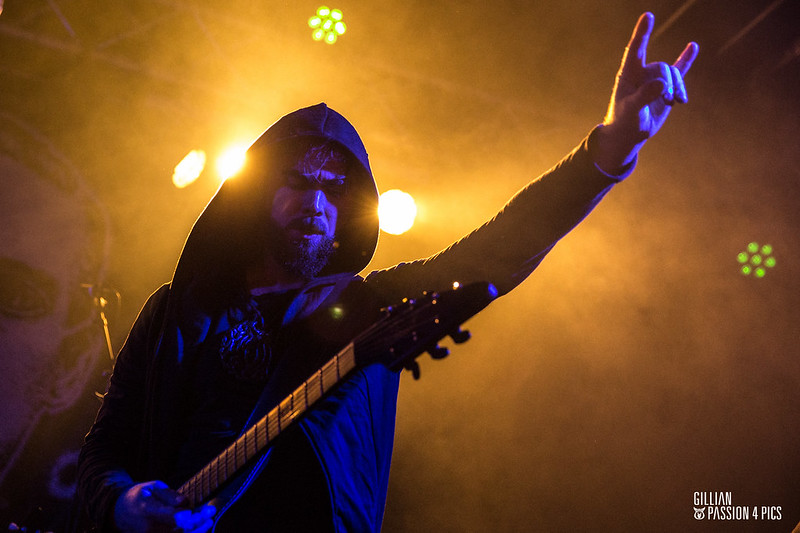 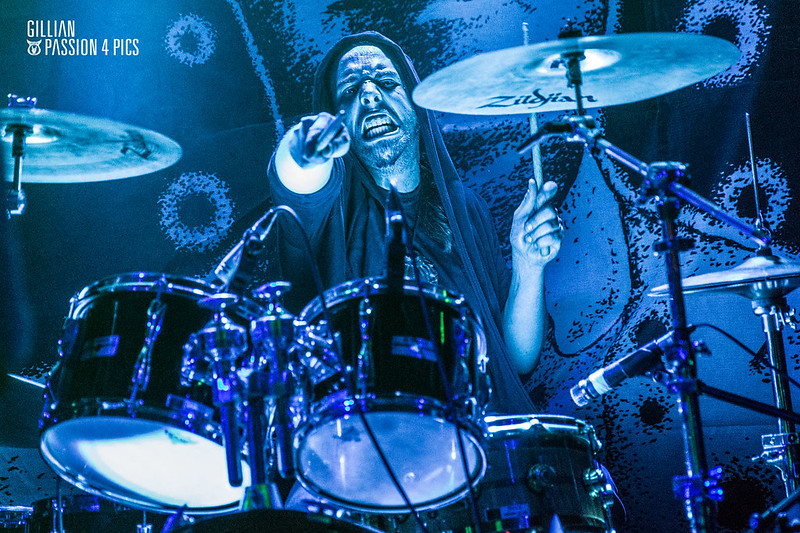 Apparently some attendees really wanted to quit the night at its highlight as the venue was less crowded when the Scottish Saor (****) took the stage. With three critically acclaimed albums out nobody was doubting the songwriting and composing skills of Andy Marshall. Listening to the records at home, Saor's music pulls you in the sometimes dreary Scottish highland landscapes and with every spin of the record you discover new aspects of the music. Tonight's question was if the elaborate and immensely layered music of Saor could be transferred to a live stage. Would we be drawn towards the faraway hills of Scotland? This show is what I usually like to call a 'close, but no cigar' performance. The intensity was brilliant and Marshall's vocals were rumbling over the crowd. However, the clean vocals were often off and drums were too loud in the mix. In a band where you expect to hear and discover so much this is a painful letdown. A lot of people seemed to agree and left earlier. But again, because of the intensity and the band's interaction with the audience those who remained were really part of this unique live experience. 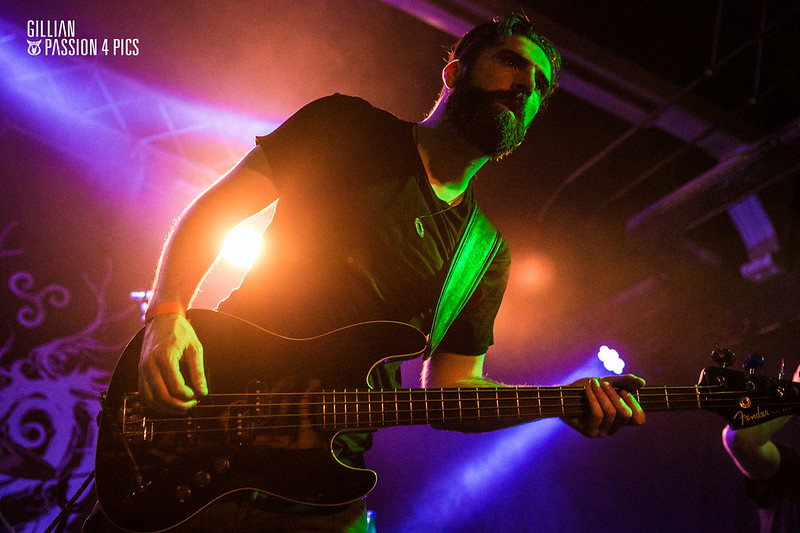 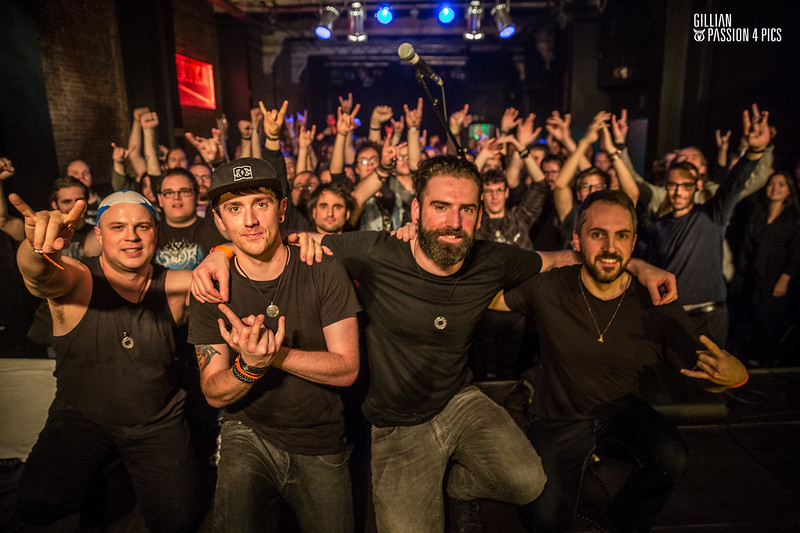 I think my ratings don't lie. The line-up of this evening was just stellar and all the bands gave it their best, motivated by the company they were in tonight. We experienced a similar intensity when Harakiry For The Sky, Sylvaine, Shores of Null and Drawn Into Descent (again...! 😉 ) played in our own venue Asgaard last week. Also that evening was supported by 5 Shades of Black. Do you see a trend coming here? If you don't want to miss out on the atmosphere of these nights be sure to attend the shows in Asgaard the 25th of November with Blaze of Perdition, Ars Veneficium, Antzaat and Vulgar. Click here for the Facebook event and see you then!
All pictures by our house photographer Gillian. View the full photo report here.
TAG2017 5 shades of black atmospheric black metal Belgian belgium black black metal drawn into descent fen french gigs kavka live music metal music reviews saor scottish Sorrow Plagues the great old ones
Previous Post5 Shades of Black (Kavka) Next PostWitherfall – Nocturnes and Requiems