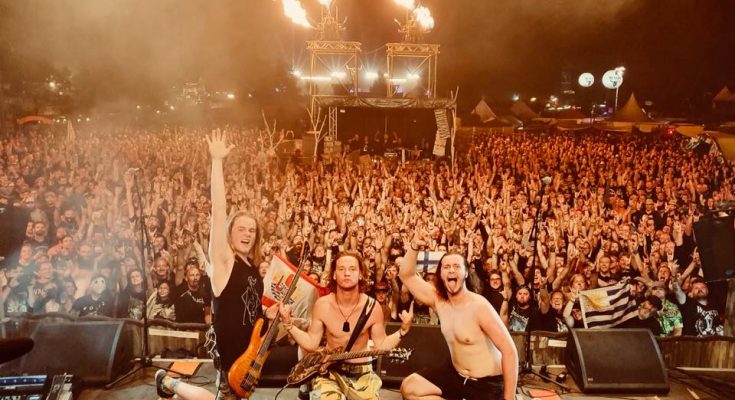 Alien Weaponry from New Zealand has been rising to the top quite quickly this year. After releasing their debut full-length on Napalm Records, they got invited to several festivals and shows all over Europe. Including the prestigious Wacken Open Air! So since we were hanging around there as press this year, we couldn’t let a conversation with these young lions, who could be part of keeping metal alive in the future, pass us by…

All 3 of the guys (Louis, Henry and Ethan) got into metal due to the love for the music genre in their family. They really like it because of the passion in the music. The brothers, Louis and Henry, grew up in a musical household and were jamming for a while. So they decided to create a band. Which became Alien Weaponry, the name they picked up from the movie “District 9”.

The brothers went to Māori school (Louis’s first language) therefore he already spoke the sung language from a young age. Bassist Ethan is still learning the language from the other two and is doing great. Things got serious when they got into “national finals”, which led to people taking them more seriously and kicked off their career.

Changes in life with touring and such: lots of sacrifices when it comes to hanging with friends and living the life of a teenager. However, they are working hard and successfully finding balance. They don’t mind. Hanging out with the band is their priority and they find comfort in it. They are going with the flow and not forcing anything. They follow the path the music leads them and try to enjoy every minute of it.

“We’ll keep doing what we’re doing and it takes us where it takes us. If it ends up being on the main stage at Wacken then so be it.”

Ethan enjoys it, even though its unconventional. They entered this job pretty young. Their reward for it is just enjoyment and playing in front of people, having fun. They said their family is very supportive of their musical career, the entire family.

“I don’t think you can force things that happen in your life If its’s coming naturally you should go for it – If your heart’s not in it then you shouldn’t be doing it.”

It’s a crazy feeling that they seem to be so important to Māori culture. They try to sing about important topics, historic and Māori related and with that try to make certain themes more approachable. Giving New Zealand people a platform to talk about historical issues and events. For the future, their goal is to headline Wacken some day and spread their message even more.

When making new music, all of them write songs and Louis the lyrics usually. They had a rougher start due to everyone wanting to show off their skills in the beginning. However, by working in pre-production with other artists, they learnt to give each other space to write and create in unison. They also always keep the audience in mind: “how will they react to our songs live?”

They open every show with a small haka with all of them are chanting. This they do as a sort of ritual and well, the haka is a big part of their culture.

When asked what their favourite band would be they would love to work with, they quickly responded with Lamb of God. 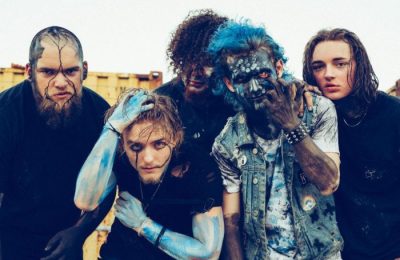