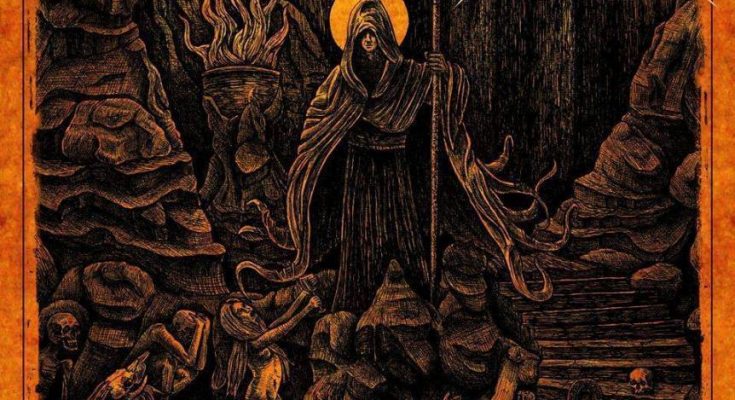 Black metal and Belgium aren’t often mentioned in the same sentence. But with the likes of Kosmokrator, Adustum, Cult of Erinyes, Enthroned and the Ordo Omegae Absolutae collective there are still some projects worth noting. As of 2016, the fierce Ars Veneficium can be added to this list. About a month ago, they released The Reign Of The Infernal King via Immortal Frost Productions, one of the few Belgian labels to promote black metal. Having seen them live together with Fides Inversa, Tortorum and Horna, I was quite curious to hear new material.

After a demo and a split with Azaghal, Ars Veneficium stepped up their game and have released a full length album, 3 years after the conception of the band. The first thing to strike me is the cover art and layout of the cd. Opposition Artworks did a great job designing the cover art, depicting a hellish landscape with the Infernal King in the center. The rest of the booklet has some nice artwork as well. The only thing that could have been a bit better would be the font, as the lyrics are difficult to decipher.

The album opens with a short ambient intro, only to smack you in the face when the second song Damnation Of The Soul comes along. Furious blast beats immediately set the tone for the rest of the album. Ars Veneficium has some mid-paced structures on the album as well, as is the case in Angels Of Angels. But the only real break from the sheer violence is the intro of Extinguished Are The Candles Of Holiness, depicting a conversation between good and evil. Next to all the blast beat-driven harshness, Ars Veneficium also show us their more melodic and atmospheric side in Reign In Darkness. With this track they prove they’re capable of more than just bashing their way through.

Guitarwise The Reign Of The Infernal King reminds a lot of bands like Sargeist or Marduk: they create a razor sharp tone. Vocalist S. sure knows how to handle his voice, and exclaims his devotion through raspy shrieks, throwing you right back into the second wave of Scandinavian black metal. Production on the album is quite clear: they managed not to drown their riffs in between all the blast beats and vocals. At times, even the bass comes to the foreground, as is the case in Angels Of Angels.

All in all, Ars Veneficium created an album that’s certainly worth a listen. Their songwriting is tight, and it’s clear these musicians have a lot of experience under their belt. On the other hand, they don’t really stand out as very original to me. They don’t thread outside of the already paved ways, but then you can ask the question if that’s really significant? In The Reign Of The Infernal King is a solid album. It might not add anything really new, but they’ve created a more than decent album. As a debut full length, this certainly is a strong effort!

For those of you who would like to see them live in Belgium:

Release Date: September 26th, 2016
Label: Immortal Frost Productions
Tracklist:
1. Intro
2. Damnation Of The Soul
3. Fallen To The Realm
4. Angels Of Angels
5. Extinguished Are The Candles Of Holiness
6. Reign In Darkness
7. As Flames Spread Into Chaos
8. Thy Will, My Hands
9. Bringer Of Light