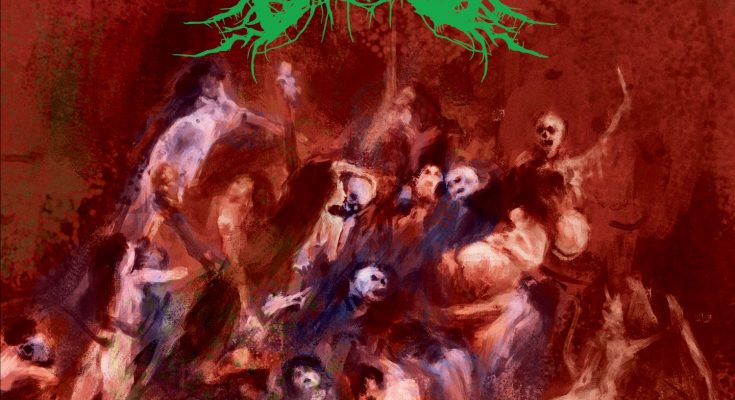 During the 1990’s the Danish metal scene has lavishly bestowed upon us many great albums, mostly in the heavy metal genre. Since the past 10 years we metalheads sensed a sudden change in the musical aspect where newer bands began to pay homage to death metal music. As a matter of fact last year two of my favourite albums came from Denmark, and am talking about Undergang and Phrenelith whose albums were widely anticipated and largely received by fans around the world. The classic records of yesteryear were overwhelmed by the Swedish and the American bands, both metal scenes have been leading the death metal genre for quite a long time. Yet their influence has generally participated into a sudden emergence of newer bands from all over the world. Presently we have this new formed band named Baest from Denmark, Aarhus a city on the coast of east Jutland.

This quintet squad has gleaned from the harvest of Swedish death metal acts like Entombed and Bloodbath and created their own sonic macabre assault with meticulous care. In fact Danse Macabre is one of the strongest debuts of this year. The album opens with catchy guitar note unleashing the first track Crosswhore with nasty HM-2 distortion, and right from the beginning the band shows how much they are influenced by the Swedish old school death metal. The chainsaw guitars are processed with dominating grooves, rampaging with chugging riffs and propelling drums that are executed professionally. One thing I noticed is that the vocalist has similar growls to Mikael Akerfeldt of Opeth, and they sound genuine and gritty.

The second track Hecatomb is a heavy fucking slab of death metal dashed with mastery of guitar work, which are smouldered with volatile grooves and blast beats that adds forceful blows into your face. Baest demonstrates lot of varieties on this debut, the album title track is mischievously sly in the sense of performance, starting with a piece of acoustic guitar before bursting into extreme death metal assault. Atra Mors brings the heavy grooves and guttural vocals again with a destructive blow. As for the guitars, they unleash one fiery riff after another, the tracks contain some bizarre solos that interplay with the shredding riffs. The musical content is of cruel and feral madness, Messe Macabre reeks with inspiring old school metal focusing on heavy chainsaw guitars of constant tempo. While the vocalist does a great job in creating this up-roaring bustle with his guttural growls.

Ritual acts like an acoustic filler of comforting interlude, Vortex and Ego Te Absolvo are both full of energy set on riffs like thousands cannons blazing up massive impacts of fire. Danse Macabre definitely has the trademarks of Swedish death metal sound a la Bloodbath, and while sounding very similar to the classic bands they still managed to find a great chemistry between rawness and the extremity of the Scandinavian style. The band has a great ability to keep the tempo on high scales of brutality, delivering catchy riffs while the drummer gives his outstanding and jaw dropping performance.

Baest are insanely brutal, raw and incredibly captivating. Everything is perfectly placed on this album from the instruments, the killer vocals, and the production, With 33 minutes of duration and 8 tracks Baest sends a crucial message to the Swedish death metal bands, probably it’s time to turn the table, and with the rise of the Danish death metal bands like Pherenelith and Undergang, Baest joins the march of the brave, this is a killer debut so don’t let it pass under your radar!