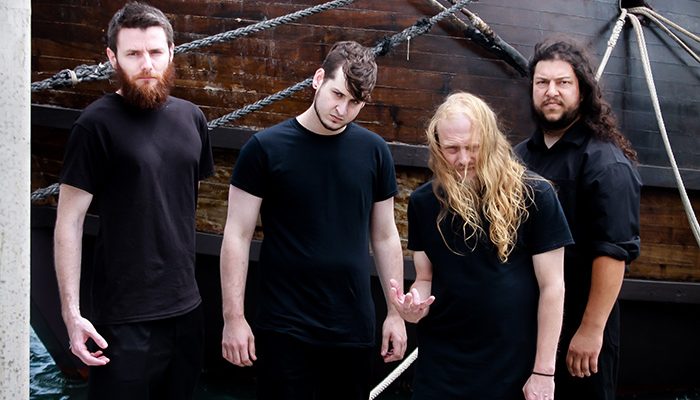 Recently I got Blood of Angel‘s EP “Rise of the Fallen Gods” for review. Having really enjoyed the release, I was happy to be given the chance to interview these guys (despite it being via e-mail).

The subject of your EP, ‘Rise of the Fallen Gods’, is clearly Norse mythology. Why this subject in particular?
This is a subject that has a lot of meaning for me. My grandfather’s family immigrated to the US from Norway. We wanted to do our own take on this subject and sub-genre. The original idea was to do a full album exploring different mythological subjects including Greek, Roman, and Celtic as well as the Norse Mythology. Due to time and budget we left it as an EP.

What would you say makes you stand out from other death metal bands?
I know it isn’t apparent yet, because our debut release is something that has been done by many great bands. In the future, we will tackle different subject matters. Musically, we want to not limit ourselves to just the death metal genre. We want to blend in more black and thrash metal rhythmic patterns with use of melody.

How would you describe your sound to someone who’s never heard you before?
We are a very high energy band. We love interacting with the audience.

I’ve been to Florida for “70 000 tons of Metal” and I noticed that, besides the people there for the festival, metal wasn’t that big a thing. Is it dead? Or is it more underground than one’d expect?
It is very underground, and it also depends on where in Florida. In south Florida (Miami area) it isn’t as popular. North of that area in Tampa, Orlando and Jacksonville, metal does well. The venues are supportive, and there is a great support system here.

Having released your EP, what (if any) are the plans for your next release?
We are already writing for a full-length album. We will be exploring the history of monotheistic religions and how they have manipulated the masses. I can’t wait to get it out.

What are the expectations of the band? Hope for a big breakthrough, keep it low key and local, … ?
I want to make the band as well-known as possible. After the next album, we plan on playing festivals and touring.

Word of “Blood of Angels” has already made it to Belgium through our website. How does it feel to know that, at such an early stage, you’re known half the globe away?
It is fantastic, and one of the goals we have. Thank you so much for writing about us, and the opportunity to connect with your audience. We hope we can play in Belgium.

Is there anything else you would still like to share with our readers?
Thank you so much for everything, and for giving our music a listen. You can follow us on our official web site or facebook. Our EP “Rise of the Fallen Gods” is available on all streaming and digital retail sites.