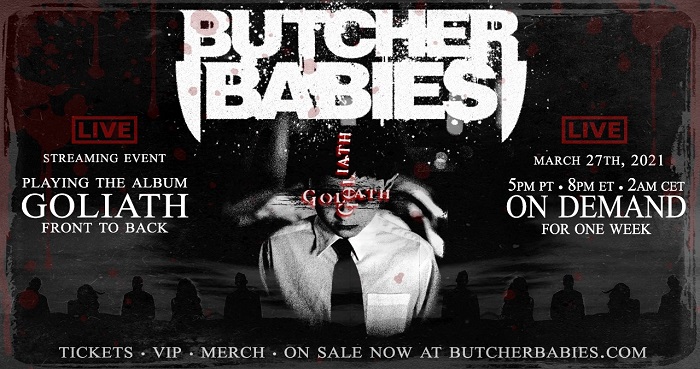 What in the world of metal have I been missing?! Sure, I’ve listened to Butcher Babies but DAMN do they put on a show! With the live music industry being thrown into a state of disarray artists have had to come up with different ways to bring music to the fans and maintain their own incomes. Well, I’m happy to say that live stream concerts are a thing and I am very content with it! Granted you don’t get to smell the sweat, beer and whatever other aromas float through the venue air, but you can still rock!

Not only did Heidi and Carla bring the energy, they brought the look. They sported the black leather, studs and boots. As well as Heidi sporting her neon green locks that were accentuated by the stage lighting. Henry Flury matched Heidi‘s green on his guitar which was equally as appealing to our eyes!

For this particular stream the Butcher Babies played their debut album “Goliath” in it’s entirety. To kick off the show they had the badass Shannon Gunz from SiriusXM Octane hype up the audience and introduce the band. Right from the start Heidi and Carla came out with a grand stage presence. Their performance started with the first track off of their debut album: “I Smell A Massacre”. Not once did they make it seem like they were only preforming for people online. They grabbed your attention and held it. Obviously they couldn’t do all of the same interacting as if there was a live audience screaming and moshing in front of them but they definitely kept the hype up and didn’t lack any energy!

When it came down to the actual performance it was mind blowing. The screams and the singing didn’t waver during transitions, it was seamless! Instrumentally the band was on point as if they have been doing this everyday! The sound quality was great, and the lighting was well planned. Overall the crew did awesome both on stage and off stage to bring this show together and deliver a great experience for everyone watching!

Throughout the live stream they had a few guest appearances by a few other rock community members sharing stories about how they heard about the Butcher Babies for the first time or when they saw them for the first time. These are no unknown names, they ranged from the already mentioned Shannon Gunz (SiriusXM Octane), Mixi (Stitched Up Heart), Amanda Lyberg (Eva Under Fire), and Lena Scissorhands (Infected Rain) to Chris Jericho (Fozzy). Having that kind of support behind you definitely says a lot about you as performers and people in general.

After going through the Goliath album from beginning to end they played an encore, which we all know they would get during any live performance. This was not just any encore though, oh no, they have 3 live debut performances! They performed their songs “Bottom of the Bottle”, “Sleeping with the Enemy” and “Yorktown” for the first time ever as well as finishing the show with their song “Jesus Needs More Babies for his War Machine” and although this song was not a live debut, it had its own special surprise. For this song they had special guest Alexia Rodriguez (Eyes Set to Kill) shredding on the guitar alongside them.

My initial thoughts after this live stream were “Oh yeah, it’s been a while since I last did this” and “Where’s my Tylenol, this is going to hurt tomorrow..” don’t judge! Because if I said I didn’t get up and clear out my living room to thrash around, I’d be lying. It’s too easy to get drawn into their presence and start rocking out! All I know is I will be making their show a priority once live music is back again, and of course I’m going to be in the pit. I appreciate the effort that was put into this show by everyone involved, including the guest appearances. It helps bring a little normalcy into a music lovers life. Keep on rocking, I can’t wait to hear BB4 when it’s released! 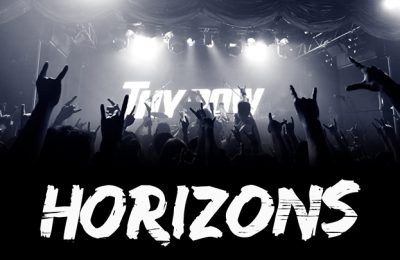 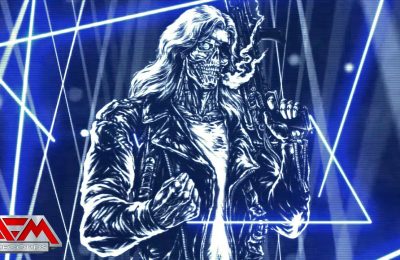