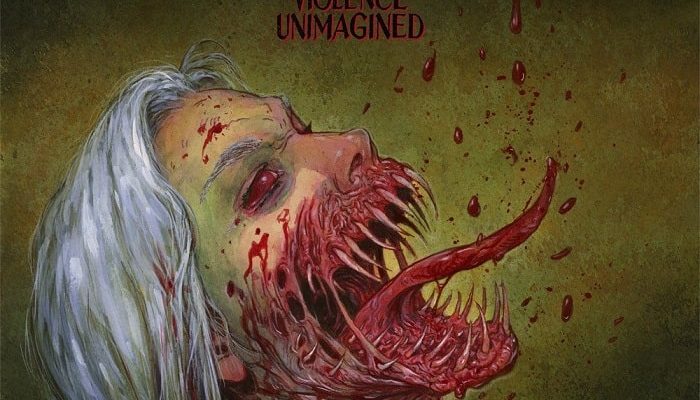 Death metal heavyweights Cannibal Corpse return with one of the most anticipated albums of the year 2021. Sprawling over the extreme genre of brutal death metal since 1988, the U.S. quintet has been consistent with their sonic definition as they maintained technical coherence and brutality in the most ultimate form of monstrosity. Cannibal Corpse never fails to convey solid aggression and their fifteenth album “Violence Unimagined” is a punishing assault that lives up to the hype. With legendary guitarist Erik Rutan (Hate Eternal, ex-Morbid Angel, and ex-Ripping Corpse) joining their ranks you should expect nothing but a pummeling old-school treat. The band provides us with a dynamic composition as they succeeded in keeping the tempo flowing in the volatile outburst of anger. In terms of songwriting and prowess, no one can deny the impact of Erik Rutan’s in the writing process. His collaboration with the other guys in the band like Alex Webster (bass), Paul Mazurkiewicz (drums), Rob Barrett (guitars), and George “Corpsegrinder” Fisher (vocals) has resulted in a fruitful outcome.

The newest album is noteworthy for its heavy pace and the classic brutality. While the majority of the tracks have that ultra-cold bloodiness, the striking improvement comes in the array of nifty riffs. The opening track “Murderous Rampage” delivers a typical sonic assault from these juggernauts. George Fisher’s signature growls sound superb as usual, the band embodies a gripping performance showcasing tight musicianship. The most impressive aspect is how the band is capable of sounding fresh to this day, in terms of variations Cannibal Corpse launches many skull-crushing riffs.

“Necrogenic Resurrection” is a brutal track but also has an old-school approach to it. The combination of groove in the mid-tempo is fortified by deep growling vocals and sledgehammer drums. Musically the album isn’t quite different from its predecessors such as “Evisceration Plague”, and “Torture”. Besides the impressive song dynamics, there are many fast and slower moments brought with groove sections and frantic solos to add memorability to the songs. “Inhumane Harvest” is an absolute banger and presents the utmost speed and savagery from the band, and this is to say that the songs will keep you hooked with many head-banging up-tempos.

Riffs are amped and delivered by massive drum paces, resulting in furious pummeling. “Condemnation Contagion” is full of proverbial sledgehammering riffs that provide something dark and visceral. Cannibal Corpse does a great job in balancing the modern perspective of technical death metal. The album reaches its climax on tracks like “Surround, Kill, Devour”. With a clinical slab of rusty guitar chugs and inhuman growling, the following track “Ritual Annihilation” brings massive drum convulsions. Tonally “Violence Unimagined” is measured by the technical scale and the trademark brutality the songs on the album are more varied than the previous outputs. The grinding effects of the drums mid-way through the track moves into sophisticated double bass and groove. Erik Rutan and Rob Barrett‘s coherence seem flawless as they emphasize more on slower tempos. Despite the simplicity of the riff structure, the songs are fully coated with massive guitar riffs. While the transition from one track to another takes more of a smooth segue, they convey a sonic range of aggressiveness.

“Violence Unimagined” is so convincing, the cohesive performance makes each song sound viciously aggressive. The sadistic boast of the inhuman growls on “Follow the Blood” is full of brutal drum battering with the skull-crushing heaviness merging lead guitars and solos. Cannibal Corpse has truly brought some compelling ingredients to the song compositions. The epitome of brutality is aptly showcased on tracks like “Bound and Burned” with the flowing array of infectious riffs being executed with proficiency topped with the devastating role of Paul Mazurkiewicz in unleashing blast beats and double bass.

Cannibal Corpse’s fifteenth album is weighty and viscerally thrilling brought by high standards. The meticulous utilization of chugs is focused on empowering a number of tracks like “Slowly Sawn“. The album is devoid of fillers and the songs sound organic. Despite the dominating mid-tempo approach, the band offers some of their best-written material to date. Being known for their quality, the album is also less chaotic where the songs shift smoothly into the trademark style of the band. Being the shortest track on the album, “Overtorture” is brought by a consistent barrage of death metal fury. Kicking off with a shattering mid-tempo on the closing track “Cerements of the Flayed”, the band displays some of their coldest and darkest facets ever.

“Violence Unimagined” is a serious contender for album of the year. And while although it does not re-invent the wheel, with Erik Rutan joining the band, they show unprecedented mastery. This is without a doubt an outstanding album by these veterans.