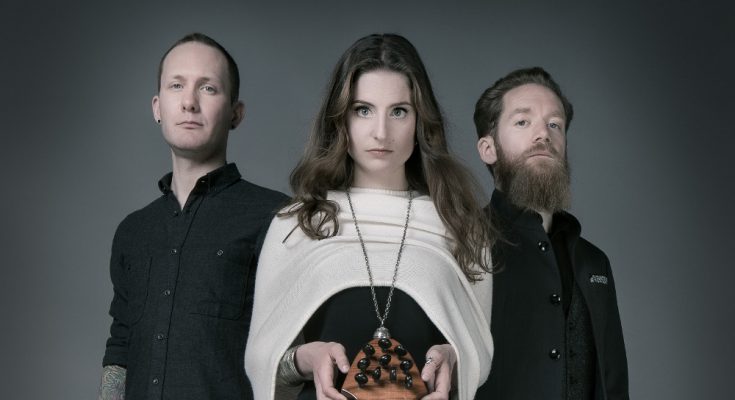 “The figure of the cover lures you into our world of stories and eclectic music. It’s a preview of the remaining artwork, where each song has it’s own own visual representation and symbol.”

The band also revealed the full tracklist of their upcoming album – an astounding 14 original songs amounting to a full hour of music. As if that’s not enough, the mediabook edition will feature 3 bonus tracks! Each band member chose a cover song to interpret in Cellar Darling’s own, unique style. The selection will be: The Cold Song from Henry Purcell’s “King Arthur” opera, chosen by Anna, Tears for Fears’ Mad World, chosen by Ivo and the epic Queen classic The Prophet’s Song – Merlin’s all time favourite. Also included in the mediabook will be an alternative and limited cover artwork plus an extended 32-page booklet, filled with the band’s notes on the stories behind their songs.

After their split with Eluveitie, Anna Murphy, Ivo Henzi and Merlin Sutter quickly realised their musical journey was far from over. What quickly developed was a unique and fresh combination of grand and heavy riffs, powerful drumming and a unique voice along with the signature folky, earthy tones of the hurdy gurdy. This, combined with classical elements as well as inherited folk influences, led to the creation of something entirely new, setting Cellar Darling on the path of musical innovation. You’ll get to enjoy the results on July 30th, but if you can’t wait for that there are already a lyric videos for you to check out:

The band also filmed an entire little studio documentary that will soon be revealed bit by bit on Cellar Darling‘s Facebook page and Youtube channel, so stay tuned!