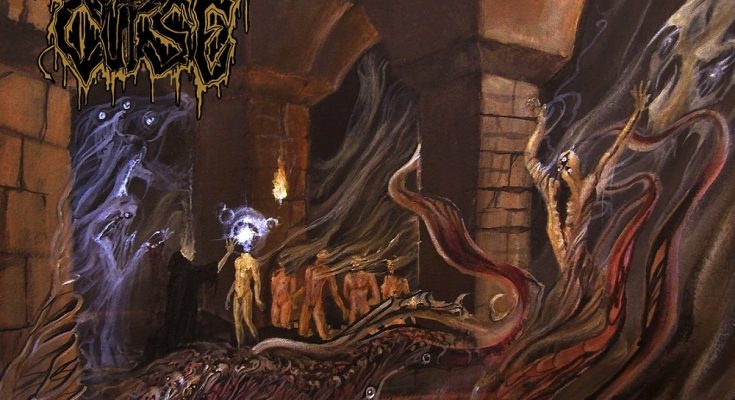 Coffin Curse is a death metal band from Santiago, Chile formed in 2012 by Max Neira, and Carlos Fuentes the members of the Chilean death metal group Inanna. Having released a few EP’s, a single, split, came back together and a compilation in the past the duo now pushes their efforts towards a powerful hold on classic death metal. By releasing their first studio album “Ceased To Be” released through the Spanish underground label Memento Mori. Despite the line-up changes the band has finally delivered a dynamic record that encapsulates the tonality of the 90’s U.S. death metal. In the vein of Ripping Corpse and Monstrosity, the old school quality is adeptly executed.

Ceased To Be shows the old school influence while the duo exerts a huge amount of energy. The music drips with extreme heavy riffs of tremolo pickings and deep guttural growls. The debut is imposed by the brutal tonality and shifts to various tempos. The album is fully loaded with vicious riffs. Coffin Curse has its own style of playing death metal. The songs infuse the elements of thrash and death metal as they burst vigorously with the pounding drums.

The opening track Gathered unto Death quickly kicks off at a rapid pace of the guitar riffing and possesses a steady tempo. The Latin American death metal bands are identified by the savage style when it comes to death metal. Bands such as Sepultura, Mortem, Cenotaph and many more are determined by the ripping tempos. While Coffin Curse isn’t in the league against any of the aforementioned bands. They do offer the raw quality of the old school death metal. Moving to the next track Where Sickness Thrives is empowered by the raw quality of the heavy riffs and visceral performance. This song particularly gave me a better impression of how the band succeeded in creating a compact album full of energetic riffs. With drums being pummeled rapidly, the monstrous growls sound deep and loud. There are plenty of well-executed solos, grooves and solid aggression that will make you head-bang.

The crossover style between technicality and old school death metal is widely presented. This courageous approach is a legitimate replica of the 90’s U.S. death metal. Chopped Clean Off has the corporeal brutality of bands such as Monstrosity and Suffocation. The music is fully rotten to the core. Coffin Curse has a firm grip on barbarity. To the dynamic power of the double bass and blast beats, the guitar section generates one riff after another riff that cuts like a saw.

Apart from the guttural growls the vocals also eject fierce rasps in some of the tracks if not all. Descend into Abhorrence brings the abrasive grooves while the energetic tempo is dominated by the striking drums. The song is processed by mid-paced riffing technique and double bass which shows the talent of the duos. There is a violent tone to the riffs while frantic riffing is what defines the Chilean band the most. Coffin Curse mixes the atonal force of thrash metal these compositional elements provide extremity to the song structure.

In similar ways, the following track Feeding on Perpetual Disgrace is achieved by the variety of the riffing. The track swiftly transforms from mid-paced and the drums execute double bass and blast beats. Coffin Curse offers much diversity along with the retro fashion style of the Floridian death metal. While the band doesn’t fall under the category of death/thrash metal. Coffin Curse compliments the strength of thrash metal by applying aggression to the songs.

The continuous aggression of the riffs maintains the tempo, until the sixth track Extinct. Despite the slower tempos, the song features some shredding solos and melodies. The display of brutality and blast beats continues on Grave Offender. And the nine minutes closer Deep in Streams of Purifying Dirt is regarded by the excellent guitar work. Despite the slower tempo at the beginning of the track, the duo exerts their talents as the drums add an organic built-up and the guitar section becomes involved in complex riffing. The considerable measures of technicality show the talent of this Chilean band.

Ceased To Be is a very well written album and the production is of high quality as well. This is a modern-day classic album dedicated to the true fans of the genre. If you crave for some old school death metal then make sure you pick up this album.