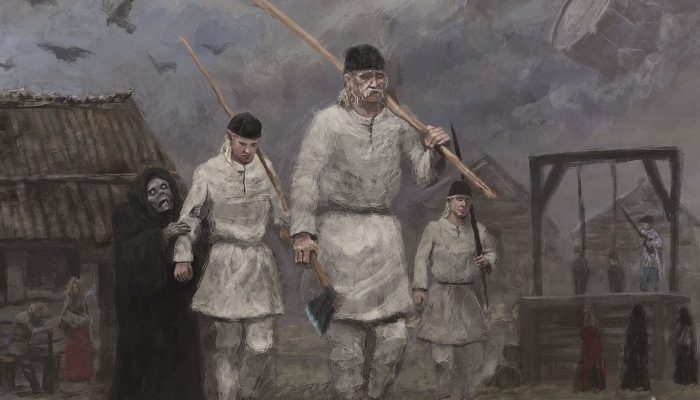 Reunited black metal formation Darkwoods My Betrothed are set to release their newest album “Angel of Carnage Unleashed” on November 12th, via Napalm Records. The Finnish powerhouse, who is known for its bombastic symphonies and grim melodies, puts significant effort into the comeback album to revive the nineties attitude of the second wave of black metal. After 2 decades of silence, a new line-up has been assembled by the founding members Pasi Kankkunen (lead guitars, vocals), Teemu Kautonen (bass guitar, backing vocals), and Jouni Mikkonen (guitars), with Tuomas Holopainen (keyboards) rejoining the band as a full-time member this time and Kai Hahto (session drummer) to capture the spirit of the second wave of black metal.

Formed in 1993, Darkwoods My Betrothed‘s debut album “Heirs of the Northstar” and the sophomore release “Autumn Roars Thunder” exuded black and folk metal appeal. Even though the Finnish act never reached the stardom virtue, their third album “Witch-Hunt” was a fine oeuvre defined by majestic symphonies a la Gehenna and Dimmu Borgir. From the perspective of modern epics, “Angel of Carnage Unleashed” imbibes deeply from the symphonic roots of Norwegian black metal. Although the newest album feels quite fresh, this interpretation was long known in the band’s uncluttered qualities. The Finnish veterans represent a nostalgic journey through the landscapes of yore, the driven guitars, and the clean vocal delivery has that folkish traditional approach.

However, Darkwoods My Betrothed perfectly captures a ravenous and brutish energy. Opening track “Name the Dead” takes a raw direction with drums firing on all cylinders. The keyboards create a majestic contrast to the fierce aggression. Tuomas Holopainen enhances the sonic textures and provides quintessential qualities. From the grim black metal shrills and towering lead guitars boosting the dynamics of the song, the riff barrages add a bombastic effect. All these features coalesce into a thrilling experience. The blasting sections of the drums merge beautifully with the symphonic frills uncovering the grim facets of the band, rhythm guitars and drums convey a fierce bombardment.

“In Evil, Sickness, and in Grief” combines the musical talent of Tuomas Holopainen with the evil nature of Darkwoods My Betrothed‘s music. The keyboards invoke an image of an epic battle while the raspy vocals of Pasi Kankkunen give it a demonic aura. This track fuses cinematic landscapes and the sweeping keyboards are accompanied by fast rhythm guitars. Darkwoods My Betrothed has stuffed their songs into a suffuse atmosphere, with often emphasis on mid-tempo sections. “Murktide and Midnight Sun” sets a chorale tone to this folk/melodic entry while the guitars sound melodic, the soaring vocals are poetic and grandeur in scale. “You Bitter Source of Sorrow” begins transitioning from dramatic folk to the majestic pinnacles of symphonic black metal, the flawless keyboard arrangements are fortified by thundering blast beats and sharp tremolo-picked riffs.

The aggressive charge of the guitars and the majestic synth is carried with the impeccable tone of the rhythm guitars. The most distinctive feature of this fabulous track is the shimmering atmosphere of the synthesizers that nourish the mid-tempo. The lavish display of the tremolos flows briskly across the pounding drums. There is a dark and gloomy spectacle that encompasses the album and this is to say that Darkwoods My Betrothed has crafted an impeccable trademark of the nineties black metal. The outstanding musical arrangements create an awe-inspiring pageant as it captures the haunting landscapes of grim black metal. “Where We Dwell” begins with a heavy guitar barrage of war anthem-like riffs and the melodic elements of the keyboards makes it all the more catchy.

The guitars provide strong hooks as there are plenty of memorable moments among the eight tracks. Pasi Kankkunen and Jouni Mikkonen maintain the level of aggression by providing catchy riffs in the mid-tempo sections where the firm poundings of Kai Hahto gradually make a smooth transition from mid-tempo to blast beats. On their newest album, Darkwoods My Betrothed transformed the epic blueprints into a powerful and dramatic result. The majestic soundscapes are the strength of the album. Tracks like “Massacre” bursts into straightforward blast beats and the epic closure “Black Fog and Poison Wind” streams through violent tremolo pickings and blasting drums while the keyboards create enough space, the thrilling moments of the haunting synthesizers provide a gloomy backdrop to this impressive track.

“Angel of Carnage Unleashed” is full of menacing atmosphere and bombastic orchestral arrangements that will bring Darkwoods My Betrothed to the turrets of its fame. This is highly recommended for fans of Dimmu Borgir, Mortem, and Old Man’s Child.