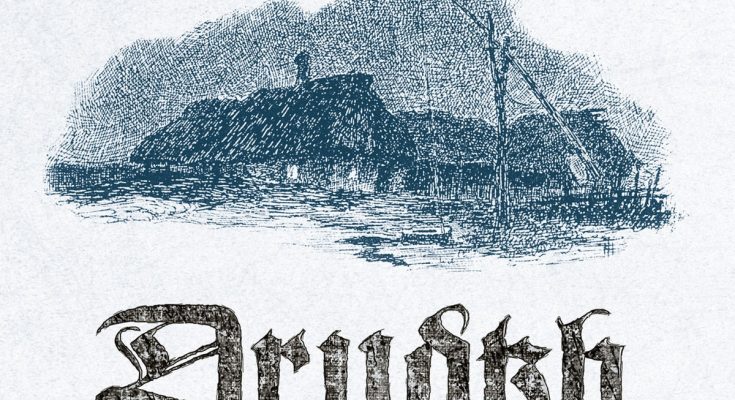 After releasing their 11th album They Often See Dreams About Spring last year on Season Mist, which in my opinion was a successful “return to form” album. The band is now at the edge of celebrating their 17th anniversary of establishment. This is undoubtedly an opportune moment for the fans of the Ukrainian black metal band Drudkh to acquire their full discography. Throughout the years the band has undergone through many musical changes, being a highly talented band who mainly fuse folk elements into atmospheric black metal music. Drudkh music is quite monotonous, atmospheric black metal that employs a great sense of melodies and rhythm. A Few Lines in Archaic Ukrainian is a collection of the musical work which was previously released on split albums with bands such as Hades Almighty, Grift and Paysage D’hiver.

The compilation features six epic tracks taken from all three split albums which were released between the years 2016 and 2017. Led by guitarist/bassist Roman Saenko (ex-Hate Forest, Windswept, Blood of Kingu) Vlad keyboardist, drummer (Windswept, ex-Of Blood of Kingu), Thurious vocalist/keyboardist(ex-Astrofaes, ex-Blood of Kingu) and the bassist Krechet (ex-Blood of Kingu, Windswept, ex-Astrofaes). This anonymous Ukrainian ensemble have stirred the hearts of my fans with the music which they have been composing. It is not a secret to say that as much as fans who have grown with affection with this Slavic band, Roman Saenko and his mates have also became impassioned about poetry and nature.

Being reputed as Ukrainian nationalists the lyrical contents of this compilation was taken from several poets. A Few Lines in Archaic Ukrainian is a beautiful and emotional compilation by Drudkh. All of the six tracks are deeply soaked with heart rending melodies and saturated with melancholic atmosphere. Golden Horse and Fiery Serpent originally appeared on the split album entitled One who talks with the Fog/ Pyre Era, Black! with the Norwegian black metal band Hades Almighty. The lyrics were inspired by the Ukrainian poet Volodymyr Svidzins’kyi.

The first two tracks of this compilation are very similar to the musical style which appeared on Drudkh’s latest album. And they capture the mood with overwhelming melancholy while focusing on the aggressive nature of the band. These two songs glow with vehemence and diversity which are brought by melodies. Fiery Serpent is a highly spirited song complemented by reciprocal melodies backed by the shrieking vocals of Thurious.

The intensity of the third and the fourth tracks His Twenty Fourth Spring and Autumn in Sepia previously appeared on the split album with the Swedish band Grift in 2016. The lyrical contents were again taken from the poems from the Ukrainian poet Bohdan-Ihor Antonych and Mike Johansen. His Twenty Fourth Spring is cold and atmospheric black metal track shaped with melodic patterns which contains some of the best melodies of Drudkh.

While Autumn in Sepia was premiered on February the 6th and it is a standout track played with the sudden intensity of blast beats and vicious vocals. There are some fine tremolo pickings that echo with dark riffs, the melodies and the melancholic feel makes the whole theme of this track. All shades of atmospheric and melodies create a dark aura when the mid tempo arouse with soulful tunes of the instrumentation.

All Shades of Silence and The Night Walks Towards her Throne both appeared on Paysage d’Hiver split album. These two tracks were based on the lyrical works of Yevhen Pluzhnyk and Maik Yohansen. The song is built on hypnotic music and subterranean melodies, which also includes an outstanding drumming work which is mainly played raw and fierce. The track goes into many shifts and changes but the most effective element is the heavy use of dungeon synth which adds a hypnotic sensation to the music. The Night Walks Towards her Throne is a contemplative and beautiful epic song that draws some similarities to Burzum.

The beauty of Drudkh musical style is wrapped with the rhythmic drum patterns, strong vocals and the strumming tremolos which creates this whole sense of dark atmosphere. The most powerful aspect are the hidden melodies which spread into the overall feel. If you consider yourself a fan of Drudkh then you shouldn’t think twice about buying this compilation, A Few Lines in Archaic Ukrainian is Drudkh’s tour de force and it’s brilliantly delivered from one of the best atmospheric black metal bands of Ukraine. 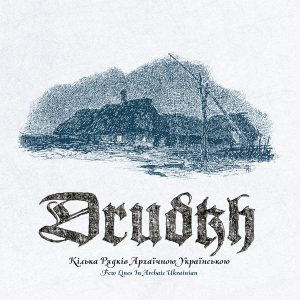