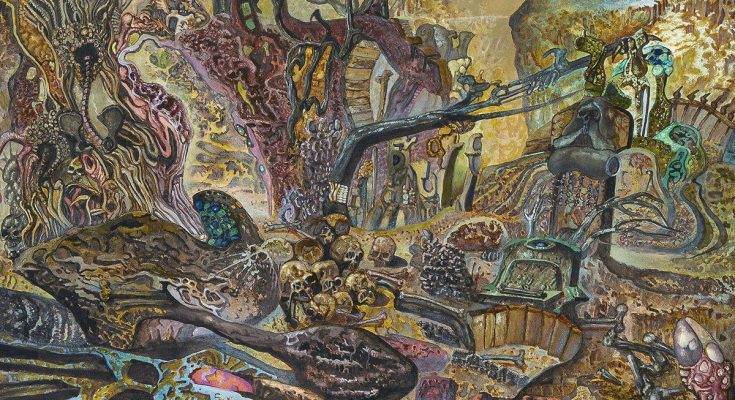 In modern age of metal many bands abide to the fundamentals of 90’s old school metal. U.S. death metal quintet Gatecreeper unleash their sophomore album “Deserted” three years after releasing debut album “Sonoran Depravation” via Relapse Records. The Arizona old school squad still bare the influence from Swedish death metal. The band blustered their way through the U.S. underground metal scene in 2016, and released several split albums and two E.P’s. With the overt sound of the 90’s old school death metal exercised in an effective way.

In that spirit the level of songwriting doesn’t only simulate the weighted buzzing riffs as the band intend to cement their sound adequately. The current underground scene of the U.S.A. seem to be infested with cavernous bands, where they wield influence and power. Yet from the swarming heap of these underground bands there are a few bands like Outer Heaven, Gatecreeper and Witch Vomit that carries the affection to the Scandinavian style of death metal.

The Arizona quintet possesses a robust ability to exert further in the direction of the Swedish death metal style, and the new album shows a natural progression from the debut. Firstly the most comparable bands to be mentioned here are Dismember and Entombed. Deserted also brings the crushing vibes and other influences from bands like Bolt Thrower and Obituary. Despite of the straightforwardness Gatecreeper have added new measures to the formula this time. The album is a ripping death metal record and a great mixture between the American and the Swedish style combined with devastating chainsaw riffs. Deserted is the kind of savage death metal album that will please fans of the genre.

The album offers loud and infectious riffs boosted with the HM-2 pedal. This unique hybridization makes Deserted heavy and raw. Gatecreeper also apply many slow tempos, where the opening track “Deserted” is a coalition of chugs and doom like riffs. The band is perfect at tackling the slow tempos of Dismember. The drums kick with double bass while the vocal growls are deep and throaty. Gatecreeper doesn’t fuck around when it comes to death metal, the tracks on the new album sound tight and succinctly brutal.

The second track “Puncture Wounds” is a banger and lasts for 2:46 minutes only and exerts on the crushing groove. Each song has a great tempo and there is a sufficient amount of riffs. The band is gritty in displaying the atonal riffs and the performance is full of energy. Some tracks contain similar attitude that can be compared to the forefathers of Swedish death metal. In fact Gatecreeper plays old school death metal way better than a lot of the newer Swedish death metal bands! And while it’s effective to combine melodies, the guitars on the third track “From the Ashes” are blasted by incendiary riffs. The aforementioned track also displays notable melodies that resembles Bolt Thrower.

The death metal quintet understand how to accelerate the pace when needed, there is just so much violence addressed to the songs. “Ruthless” is a superb simulation of the band Obituary and the effects of heavy groove are centered on overwhelming riffs along with the guttural vocals. The sophomore is a huge improvement for the band as you can sense a solid confidence. Most of the tracks on Deserted are diverse and have enough quality, for example “Everlasting” and “Barbaric Pleasures” are built on violent riffs and pummeling drums.

The brutality comes from the overall execution with energetic firing killer guitar leads and a rhythm guitar that also creates the melodies. Gatecreeper tends to focus on chugging riffs where the double bass is often activated at full force. “Sweltering Madness” is another heavy death metal track taken from the band’s 2018 E.P. The new album reflects on the diversity of the songs although the fundamental approach remains the same. The band has successfully managed to achieve their objective, within the new album the melodies are injected and modified. “Boiled Over” and “In Chains” shows the approach to diversity, even the album closure “Absence of Light”. The track contains catchy melodic leads and it’s a great way to end the album with the hooks. The band has gradually developed in a span of three years and this is to say that Gatecreeper achieved great success on the sophomore. Deserted is really a remarkable record and personally one of my favorite death metal albums of the year, don’t sleep on this!