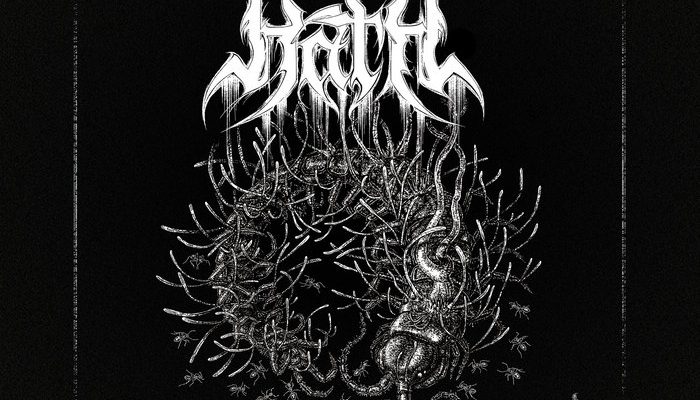 These past few years whenever the subject of melodic death metal arose, a sense of disappointment would grow over me before even delving into specifics. In all honesty, the genre had grown a little stale for me, due to more than a few letdowns from bands which I used to hold in high regard. I dropped out in need of a serious break from mediocre records and ventured forth towards other styles which could still make me feel the rush of discovery. But in April 2019, my faith was restored when I stumbled upon Hath. I couldn’t believe my enjoyment of the near perfect mix of brutality and soaring melodies found on the New Jersey quartet’s full-length debut, ‘Of Rot and Ruin‘. The passion and emotion was so intense, so palpable, most songs gave me goosebumps and brought tears of awe to my eyes again. ‘Rituals‘ remains to this day one of the best melodeath songs I’ve ever heard.

Hath shows a lot of promise. Especially, considering their discography is limited to the aforementioned masterpiece full-length and one EP called ‘Hive‘ which came out in 2015, and which I’m ashamed to say I hadn’t spun before this review. But being so glad to having had my faith restored with ‘Of Rot and Ruin‘, I didn’t dare tarnish that at any cost. Last October they decided to give ‘Hive‘ a crispy remaster and re-release it with Willowtip Records, so that’s what I’m taking a look at today. There’s no avoiding it anymore.

There are a four notable differences on the reissue. First of all, the EP will now be available as a physical release, which I understand wasn’t the case with the 2015 one. The cover artwork has been redone for the occasion and seems to have a much more gorgeously straightforward design that’s clearly more in line with the EP’s concept of a “hive”.

Then there’s the overall sound that’s been remastered in order to smoothen some of the original EP’s rougher edges. The instrument mix is evened out and the cymbals have less of a messy splash. As was the case with ‘Of Rot and Ruin‘, I’m still a big fan of those drum licks that to and fro between full-on death metal and careful jazzy rhythms. And let me say the bluesy guitar solos and menacing acoustic bits in between pummeling tremolos and dissonant riffing are just pure genius. The purity of it all transports me to another more peaceful plane of existence.

Finally, and most importantly, we are gifted a brand new track called ‘Atropus‘, which is again testimony to Hath‘s craftsmanship. The song fits the reissue so flawlessly, it seems to have been there since the beginning while simultaneously falling in line with the music on ‘Of Rot and Ruin‘. As the last song on the 2020 remaster, I’d say it paradoxically works as a bridge between two sounds that were perfect in their own way, but which were begging to be linked more closely. ‘Atropus‘ is the one that does it.