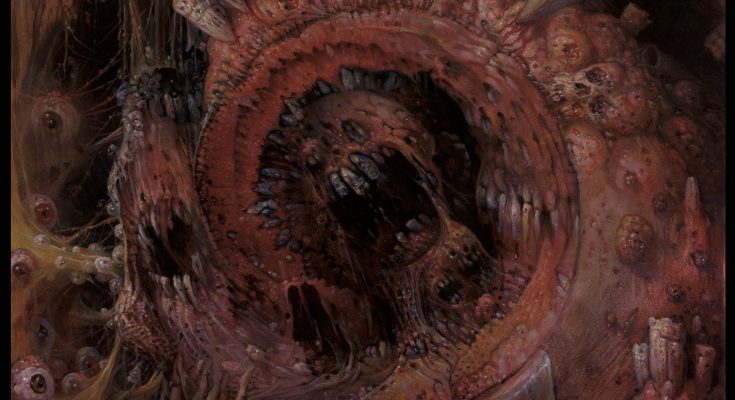 Hyperdontia is a medical condition defined as the presence of extra supernumerary teeth, it’s an abnormality of having more teeth than the regular number. Normally this condition appears in the area of dental arch, now am sure that if you view the pictures on Google related to this condition you will certainly see many disturbing pictures. But you can also take a glimpse at the album cover of Nexus of Teeth which actually summarizes this dental anomaly. With this brief information we are yet to introduce a newly formed band named Hyperdontia whose members are from the Danish death metal scene. Last year the band began with their musical initiation and released a short EP Abhorrence Veil. And later this year they took another step forward and are releasing their debut album via Dark Descent Records.

Hyperdontia is an outcome of the Turkish musicians and members who participated in the success of Phrenelith‘s Desolate Endscapes and Undergang‘s Misantropologi. The line-up consists of Malik Camlika (Necrowretch) on bass guitar, Tuna (Phrenelith) on drums, Mustafa Gurcalioglu of (Engulfed and Decaying Purity) on guitars and finally David Mikkelsen, vocalist of Undergang and Phrenelith. And with this incredible line-up Nexus of Teeth was ultimately forged in eight putrid tracks of filthy and putrid death metal. First thing which comes to mind is that vocalist David Mikkelsen sounds monstrous with his low growls and they’re supported by eruptive blast beats and catastrophic double bass sections adding a layer upon layer of brutality to the songs.

This is basically a rotten old school record smoldered with dense riffs that shows a variety of guitar manipulation in the style of Incantation. The album makes a solid opening with Purging through Flesh where it overwhelms with the rancid stench of old school, giving a murky atmosphere to the first song. As they emphasize on slow parts that fits to the nature of this cavernous death metal record. The guitar provides the tracks with whirling riffs combining them with semi-technical skills, the songs don’t require a few listens in order to digest their complex nature, and despite of the tracks being short in length they still weigh heavily with the intricate riffs.

Aura of Flies outflows with disharmonious riffs the drums are delivered straightforwardly the guitar section is specified by crude and unrefined chords. There are no fillers here, all tracks are smouldered with anger of swirling ferocity, injecting constructive leads and solos with impulses. The band display a sickening old school sound by the low pitch growls which are held by David Mikkelsen whose vocals have different variations, therefore the tracks are more accessible and entertaining .

Majesty is one of the songs that grabbed me instantly due to the murkiness of the sound also the vocals here have a different vocal pitch they somehow sound like gurgling growls. The guitar is based on constructive riffs oozing out with putrid and nasty tones and slowing down before the drums burst into a maelstrom. Hyperdontia stands on firm base and  prove that they can write some powerful riffs beside the guitar licks which are basically applied on each track on this album.  Throughout the 36 minutes I did not detect any melodies each track evolves with thick shredding of the guitar tone, the songs fluctuate between mid and fast tempo.

Escaping the Mortal Embodiment brings the riffing style of Morbid Angel while the drums blast in pure energy. Hyperdontia displays a handful of quality riffs building on murky and cavernous sound by switching to slow doom tunes like dirges. Hyperdontia are not related to the category of cavernous death metal bands, but somehow they have the accessibility of sounding murky. Nexus of Teeth is both a pandemic and devastating record, I believe this band will take every natural step to evolve towards greatness and this album is simply way above the average for any death metal band.