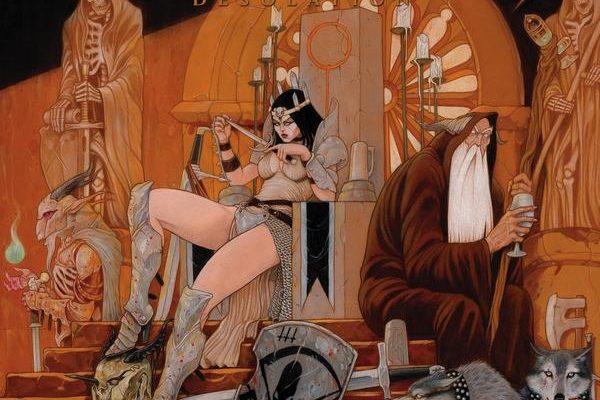 It is common knowledge that in the early 1990s, a scene of punk-rockers from the western USA changed the face of heavy music forever. The definitive achievement of “grunge” and alternative metal was not so much their disregard for the theatrical conventions of 1980s heavy metal, but the fact that that they made it common for heavy bands to sing about everyday emotions in an unapologetic way. To be sure, metal stalwarts like Judas Priest, Iron Maiden and Metallica sang about the personal fate of the elderly, convicted criminals and the chronically ill, but theirs was always a tale of superhuman struggle to destroy shackling social institutions. Who doesn’t want to listen to stories about men returning to their unspoiled state, fearlessly driving “beyond the realms of death”? Well . . . the Seattle scene, apparently. Bands like Nirvana and Alice in Chains made a decisive break with the heroic ethic, choosing to glorify the typical “loser” instead. The whole move was a roaring success and waves of self-pity descended upon heavy metal and all of its myriad subgenres.

Make no mistake, this little historical overview is not an injunction to love or hate any of the observed perspectives. As true children of the Enlightenment, we should allow people to make their own ethical choices, to embrace either option or even to reject all of the above. That, after all, is the nature of freedom. And just how flexible contemporary popular music has become is illustrated by Khemmis, a bearded quartet from Denver, Colorado. On their third album, Desolation, these doomsters combine the vocal and lyrical approach of alternative metal with the dueling leads and galloping rhythms of 1980s heavy metal. The discerning listener will also hear smatterings of post-rock and black metal. These were once considered antagonistic subgenres, but the whole works surprisingly well. One could fault Khemmis for chasing all the recent trends in heavy metal, but I’m in a forgiving mood. Thanks to the band’s improved songwriting capabilities, Desolation is a nothing but killer.

The drama begins with some serious “Bloodletting”. To my great satisfaction, the meandering sludge that held down Khemmis’s previous releases has completely evaporated. In its place, we find a heavy-prog hybrid with vocals that hold the middle between Eddie Vedder’s despondent “yarling” and Ray Alder’s passionate crooning. The track sports an interesting ABCADCE structure with an emotional spike before the second chorus and a final descent into darkness. This formula returns on the Sabbathine “The Seer”, where an altered second verse is followed by a more extreme pre-chorus. Once again, this rather cyclical beginning drifts towards a satisfying resolution: a dreamy bridge and eerie leads give way to guitars grooving on a swinging backbeat. The appearance of violins in the outro makes the experience complete. This is modern metal done right.

The monumental “Flesh to Nothing” has epic riffs and leads akin to Solstice or Argus, although in the vocal department Khemmis reveals its customary alternative lineage. A black metal aesthetic creeps up towards the end. Raspy screams and tremolo guitars rise up from Agalloch’s grave until a melodramatic solo section illuminates the night sky. A final highlight on Desolation is the thundering “Maw of Time”. Its main riff sounds like Purple on steroids and the chorus is just massive. The combination of harsh vocals and clean singing generates a contrasting “beauty and the beast” effect. Not necessarily original, but in the hands of Khemmis both voices intertwine in a personal saga of human sadness.

On Desolation, Khemmis sounds both more streamlined and more ambitious than they were before. Slowly but surely, the band matured toward a level that approaches the best work of Pallbearer and Mastodon. Simply essential, if you like your modernity with a heavy dose of tradition.