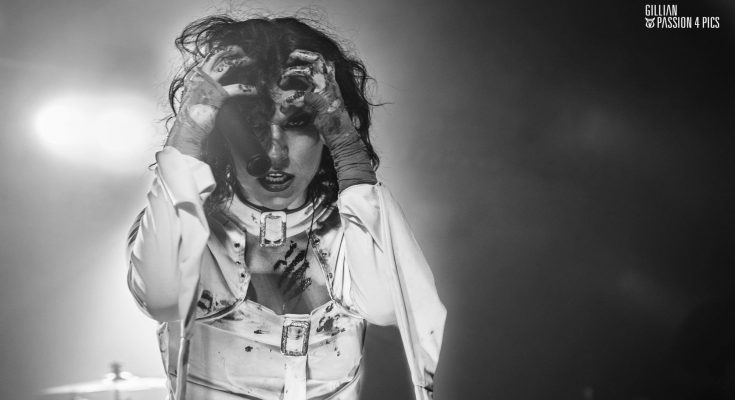 On a cold Saturday night we dared to cross over towards Diest’s Moonlight Music Hall on the other side of the country, despite the forecast of ice and snow. Was it the winter perseverance of Grimm’s Finnish chapter that inspired us or simply the fact that our favorite Italians of Lacuna Coil stopped by in Belgium? They brought the Swiss Cellar Darling with them, who made their very first visit to our country.

It is only recently that the Moonlight Music Hall immensely upgraded its capacity by renovating the old hangar at the back of the bar we know from smaller intimate concerts in the past. This allows them to book bigger names and with the easy accessibility from the highway and a large free parking lot next to the venue, this location on the east side of Belgium has a lot of possibilities for growth. In order for that to happen we can think of a few suggestions to make the concert experience more pleasant for the visitors. First of all, more light on the parking lot could increase the safety. Secondly, more light inside the venue would be beneficial as we were welcomed in with flashlights to scan our tickets and get our bags checked. And thirdly, some more warmth inside the hall – especially at this time of year! Now it was up to the bands to warm up the crowd both literally and figuratively speaking.

First up was Cellar Darling (****). The trio consisting of former members of Eluveitie (Anna Murphy, Ivo Henzi, & Merlin Sutter) gave a healthy and vivid impression as they took the stage. The transfer after years in one of the biggest bands in folk metal cannot have been an easy one. But with their recent album This Is The Sound (check out our review here!) and this support act slot for Lacuna Coil the band is paving their own way forward. It is clear they have left the strongest folk influences behind them. Cellar Darling brings a playful mix of both serene and more up tempo pieces centered around the vocals and instrument of Anna Murphy. Compared to her role in Eluveitie she really steps it up as a full time frontwoman now. 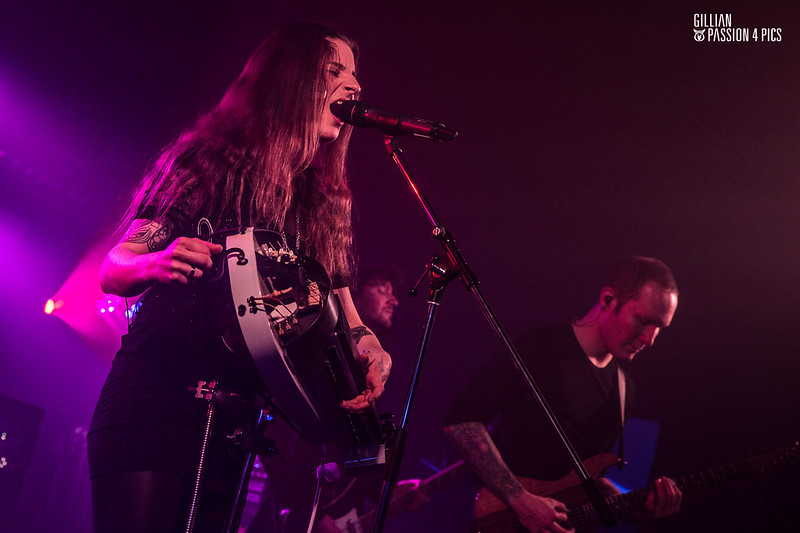 Throughout the years her vocal contributions to Eluveitie‘s songs kept growing and so did her confidence as she took her place behind the microphone. I can really appreciate her imperfect but authentic style of singing. She appears modest, even timid and dreamy on stage. She’s not one for too much talking in between songs stating they prefer to tell their stories through the songs. Add the iconic hurdy-gurdy to the picture and you immediately have the band’s unique sound. As said before, the band has left behind most of their folk influences behind and this is also true for this instrument with roots in many cultural music styles across Europe. Sharp eyes could spot how Anna implemented modern guitar techniques such as bends and a plethora of effects to this classic instrument. Cellar Darling delivered a convincing first performance on Belgian soil, proving they’re not just a spin-off of their former band and here to stay to win over more hearts in the future. 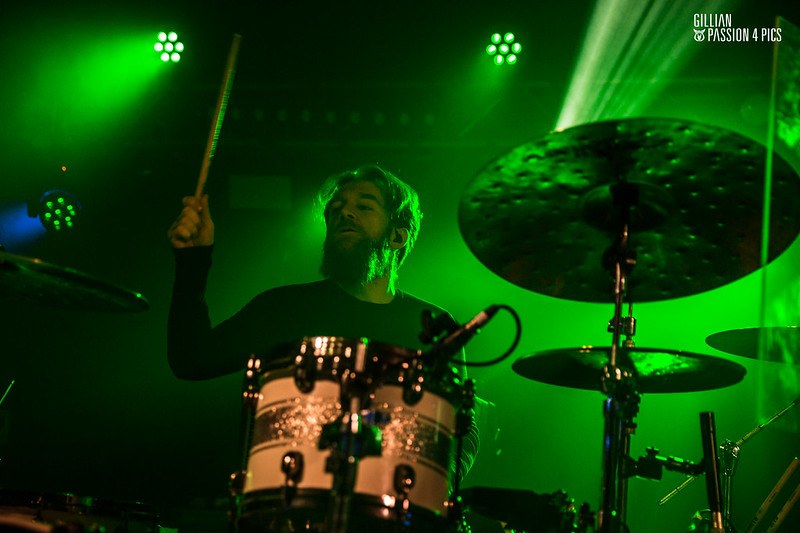 After the introduction to this brand new band, the stage was cleared for a group of musicians performing on stages for almost 20 years now. Over the years Lacuna Coil (****) have regularly reinvented themselves, growing from a gothic metal band, over an alternative metal act, to the modern metal outfit they are today. While I lost track of the band in my youth after the release of Karmacode, they suddenly popped back up on my radar with year’s strong release of Delirium. Especially the harsher style of founding members Andrea Ferro on vocals and Marco ‘Maki’ Coti Zelati on bass pulled my attention. 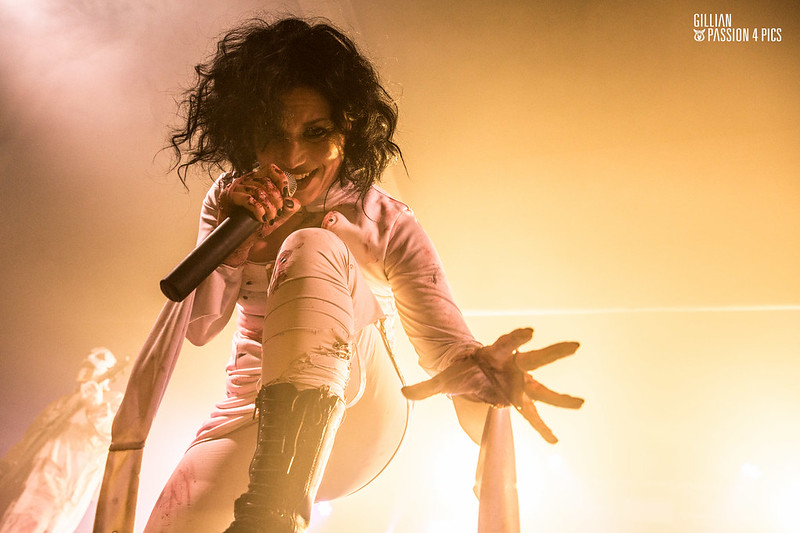 This new approach was clear from the beginning of the show as the Italians kicked it off with ‘Ultima Ratio’ of the latest album. Unfortunately, the band suffered from a bad sound mix that demanded too much of the venue’s speakers causing the lower bass sounds to roll out really distorted at times throughout the show. The band did their best to not let it influence their performance and was joking around a lot on stage with each other and the fans in the front rows. While the emphasis was on the newer material, the crowd also had the chance to sing their hearts out with classics such as Heaven’s A Lie, Our Truth and Enjoy The Silence. The setlist kept a tight tempo and when the band left the stage after Nothing Stands In Our Way people clearly wanted more. 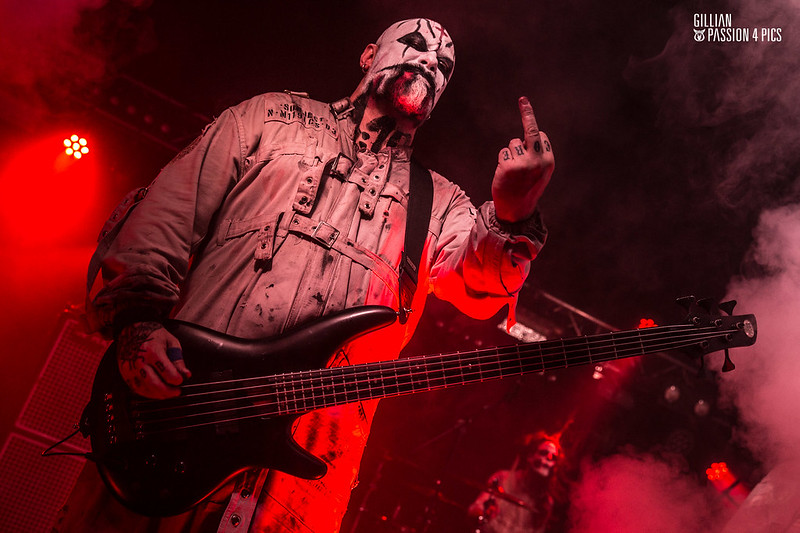 Fans who did their research didn’t look surprised as a big inflatable snowman and Christmas tree started to fill up the stage. In the spirit of the Holidays Lacuna Coil jumped in the encore of their set with the single Naughty Christmas. People in the front row came prepared and had their Christmas hats on. While the song suffered immensely from the distorted bass from the speakers, the band repaid the kindness of the fans by putting on the Christmas hats thrown on stage to continue their encore. Andrea even took the opportunity to take a fan’s smartphone and get a close-up of every band member. A funny and joyful ending of an intense show. 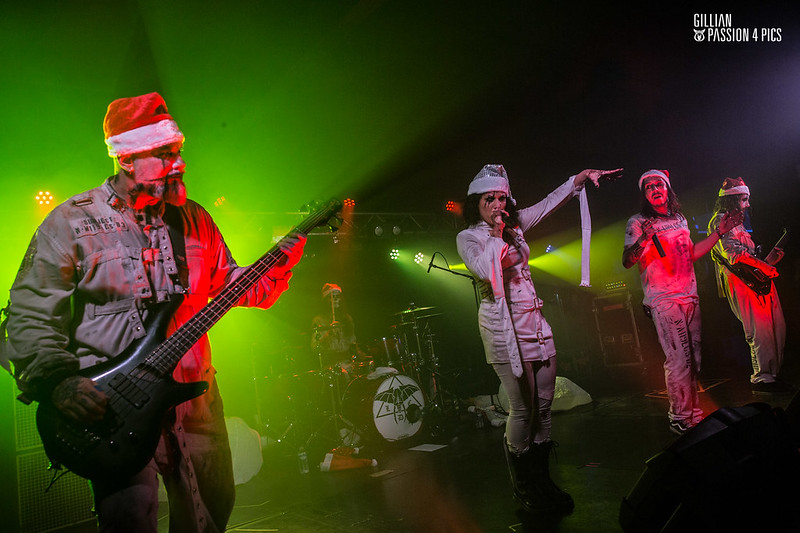 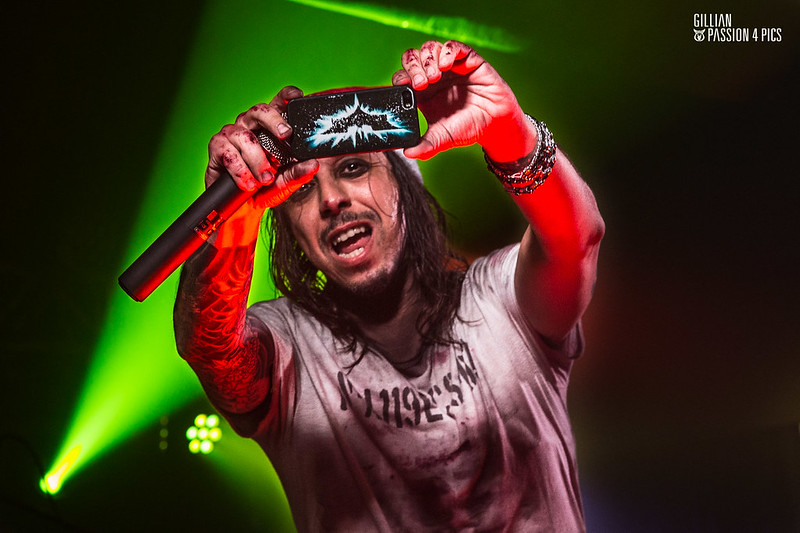 It’s great to see how close this band tries to be with their fans and organizes a signing session after every show they do. We look forward to welcoming them again when they return next year with their 20th anniversary festivities at Graspop Metal Meeting!

Check out the full photo report by our photographer Gillian HERE!