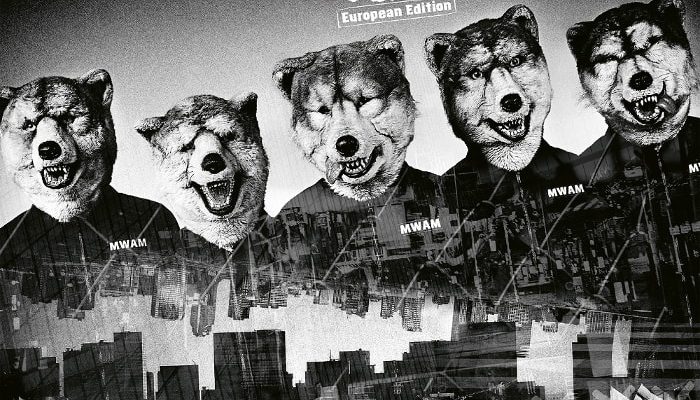 The Japanese band Man With A Mission was a great discovery for me last year. I happened to get to talk to one of the guys (or man-wolves) at Tuska (read the interview here), saw them live and got to write a review about their album The World’s On Fire. They’re definitely not as big here as they are in their home-country, but their popularity is definitely growing. Last year they were named as one of the surprises at Tuska Open Air in Finland and this Summer they’re back for more with a new European tour and a few new songs that they’ve gathered on an EP called Dead End in Tokyo, of which I have the European edition in front of me, released through Century Media Records.

Looking at the amount of tracks on this disc, you get almost a full-length worth of them. Though if you’re familiar with their older work and look closely, you’ll see that they actually have 4 new tracks on there (so worth an EP) with some (live) songs from The World’s On Fire. A nice way to get to know them if it’s your first encounter… Since I’ve reviewed most of the older songs already before (read the review here), I’m putting a focus on the 4 new tracks on the release.

They open with the title track Dead End in Tokyo that from the very beginning sucks you in with a very upbeat sound. They sing about being stuck in a big city of lies with all of your dreams, which is an all too familiar feeling for a lot of people. It overall reminded me much of bands like Good Charlotte and Fall Out Boy, with the latter not being too surprising since Patrick Stump (vocalist of Fall Out Boy, FYI) wrote on the song with the band… A very catchy and cool song to open with, if they continue to deliver great stuff like this, the Western world will get to know Man With A Mission fast!

Hey Now opens with a very Daft Punk sounding electro bit and singing which kicked up a party immediately. When the chorus pops up the “heeeey now” sounds so familiar and catchy that it’ll get stuck in your head for hours. And then they burst into a rap rock bit that sounds just like the old school sound of Kid Rock from the nineties. I see the whole song as one big celebration of nineties rock music with its blending of several styles, absolutely love it! Brave It Out sounds like it’s more influenced by J-pop, a very enjoyable track as well. And last new song and second single Dog Days brings the party through the roof with a contagious bit of dance rock that’ll definitely get you dancing and singing along. I can’t wait to see these cracking tracks live!

Man With A Mission is a phenomenon you just have to experience. If not live, at least check out their songs, I’m pretty sure you’ll find some tracks that’ll catch your attention. Dance rock, rap rock, grunge, punk, electronica and alternative rock all blended in one, with a touch of J-pop… it’ll brighten up any day. Check out this EP and if they’re in your neighborhood go see them live! This band is going to be a big thing overhere some time very soon…