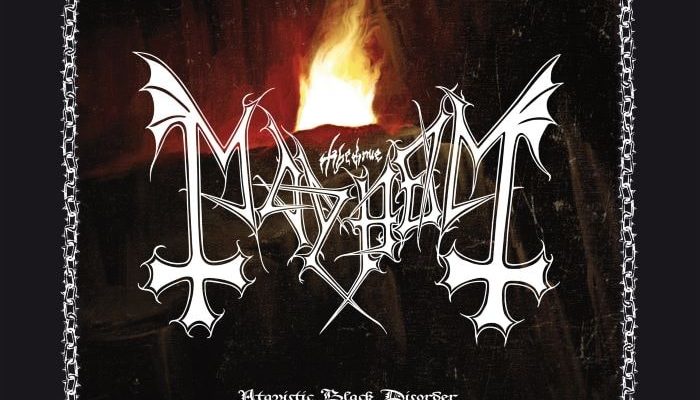 Although the foundation of punk music began in the late 1960s by bands such as Ramones and Sex Pistols, it continued to influence bands even in the eighties like Celtic Frost, Venom, Hellhammer and Black Sabbath. Along with the evolution of death metal and black metal, these sub-genres are connected to a nexus of this main musical branch. As a consequence of this evolution of sound, we have a whole generation of metal bands like Mayhem who pay homage to the finest punk bands. The newest EP ‘Atavistic Black Disorder/Kommando‘ recalls the band’s punk roots and musical tendencies. This is why Mayhem decided to uncover the basic principles that made members like Hellhammer, Maniac, Atilla and others rehearse their favorite hits when they were teenagers. After the immense success of the band’s sixth album ‘Daemon‘ and the worldwide touring schedule, there were a few leftover songs from the recording session which weren’t included on the album.

The EP only includes one unreleased original track, seeing that songs like ‘Black Glass Communion‘ and ‘Everlasting Dying Flame‘ were already included on the deluxe edition of the 2019 album ‘Daemon‘ as bonus tracks. Since the band had some extra time in the studio this resulted in recording some extra cover songs. Fortunately, the latest album sees the band in its true majestic form and after many years of musical experimentation, Mayhem is finally back on the right track. The opening track ‘Voces Ab Alta‘ unfurls with supreme tremolo riffs and the dark majestic atmosphere is impeccable. Attila Csihar‘s ominous snarls, operatic vocals and grunts capture the classic style of the band.

The opening riff on ‘Black Glass Communion‘ provides a morbid kind of atmosphere with a sense of darkness and pure wicked quality. Apart from this awesome track the artistic video clip depicts the dark evil realm and the dramatic imagination that makes it one of the best video clips I’ve seen recently. The dark energy which emanates from the guitars and the scratching tremolos on ‘Everlasting Dying Flame‘ is incredible. Attila conveys a wide range of operatic vocals. The professional quality from the guitar department is flawlessly delivered by Teloch and Ghul. The three tracks are full of tremolo reverb. Beside the dense palpable atmosphere of darkness, the unhinged and furious drumming are flawlessly carried by Hellhammer as they work in conjunction with the pounding bass tones of Necrobutcher.

‘Atavistic Black Disorder/Kommando‘ also features four cover songs. The first one ‘In Defense of Our Future‘ (Discharge) featuring ex-vocalist Messiah is a vigorous homage to the band’s early hardcore/punk roots. The intense performance and the energetic riffs give greater momentum to the overwhelming power. The same berserk attitude is brought up in the following song ‘Hellnation’ from Dead Kennedys. You can hear the savage emotion and the vital vibe exploding in torrential riffing. Whilst ‘One Death‘ (Rudimentary Peni) and the classic cover song ‘Commando‘ of the legendary punk band Ramones is one of the best cover songs I’ve heard in a while. Both the punk cover songs and the black metal tracks are in a way essential and integral to the fundaments of Mayhem. It’s such great fun listening to ‘Atavistic Black Disorder/Kommando‘, but if you are eager for some more black metal then I recommend you to check the latest output from these Norwegian black metal masters!