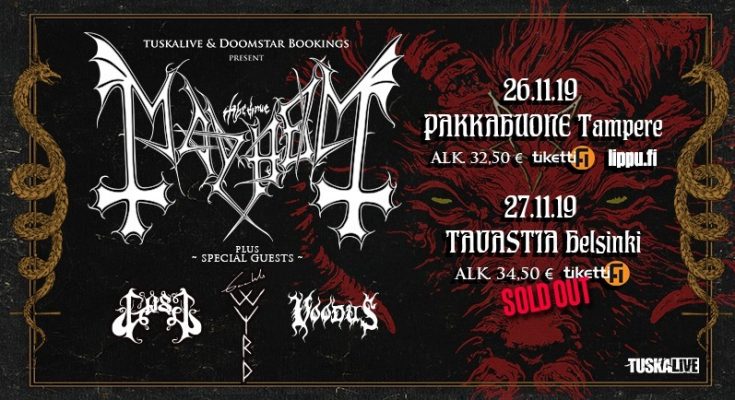 The legendary Norwegian black metal outfit Mayhem recently released a quite impressive new album with ‘Daemon’. And with that album they embarked on an extensive tour throughout Europe, bringing some very special guests with them. We were there when they invaded the iconic Tavastia venue in Helsinki, Finland, that was sold out for the occasion…

Openings band of the night was the Swedish black metal outfit Voodus. Mic stand with skull fragments attached, dark atmosphere, bone and other ritualistic accessories,… and a very typical black metal sound. The sound was quite good, the music wasn’t bad and the guys did their best, but honestly I wouldn’t necessarily needed them to play tonight. I guess not too bad of a warm-up for what was to come still.

From a friend I had heard intriguing things about Gost. I was kind of surprised to see that a project based mostly on dark synthwave was supporting black metal heavyweights like Gaahl and Mayhem. So I was really badly prepared for what happened next. The room went almost completely dark and only the lights they brought themselves and installed on the floor behind them flashed irregularly to shortly light up what was happening on stage. And that was simply utter madness.

This had barely anything to do with synthwave anymore. It still had some melodies going in the background, but the main sound that hit us (and hit us hard) was a volatile mixture of harsh industrial music and black metal. Main man behind the music baptized Baalberith shrieked and growled like a true demon and was a true explosion of energy on stage going back and forth, swinging his mic stand through the air, going on his knees to jump back up again. That combined with the sporadic flashes of light made the whole performance come across like a frantic display, perfectly fitting the harsh and unpredictable music blasting through the speakers. What. A. Show.

Next up was the latest musical project of Gaahl, a rather legendary and revered figure in the Norwegian black metal scene. When I caught Gaahls Wyrd live earlier this year at Steelfest, they massively impressed me, so I was looking forward to get to enjoy them yet again. As before, Gaahl‘s band came on stage all energized and rowdy, kicking in hard straight from the start. And when Gaahl himself strode in view, the energy and atmosphere shifted yet again. Towering over almost everyone, this is a person who radiates a powerful aura in any room he’s present in.

Slowly moving around his musicians carefully moved out of his way whenever they could while Gaahl belted out his menacing screams, alternating with haunting cleans. Despite seemingly the incarnation of all that is dark, on several occasions he sought for connection with his fans by reaching out and grabbing hands like a pagan version of the imagery on the ceiling of the Sistine Chapel in Rome. A dark god reaching out to his loving worshipers. Again an impressive show that reverberated within me for a while still after.

And then it was time for the Norwegian legends heading the bill: Mayhem took over the stage and simply blasted us with their signature black metal sound straight from the start. Necrobutcher strode on stage with Hellhammer and the rest of the band, kicking off the set with the brand new ‘Falsified and Hated’. Attila quickly joined dressed in the robes of a Satanic priest and sporting the face of a horned demon and the whirlwind of chaotic black metal could properly begin.

The first part of their set they focused mostly on their recently released ‘Daemon‘, with half of the songs coming from that album, and more recent work. Attila moved around on stage like a demented demon, fingers in weird bends at times and carrying a noose around during ‘My Death‘. During that part of the set, the music was for me personally often too chaotic, almost sounding as if they were just thrashing around a bit.

In a next part they switched to their signature robes to venture into playing some of their older classics like ‘Freezing Moon‘ and ‘Pagan Fears‘. Here the music turned back to the more recognizable harsh sound of their early heydays. A similar motion was set when they made the room explode once more in a third part of the show with tracks like ‘Deathcrush‘ and ‘Pure Fucking Armageddon‘. These black metal giants know how to invoke evil to our midst and are still quite the phenomenon. Not bad for a night out in the middle of the week…

Setlist:
Act I
Falsified and Hated
To Daimonion
My Death
Malum
Bad Blood
Symbols of Bloodswords
A Bloodsword and a Colder Sun, Part II
Invoke the Oath