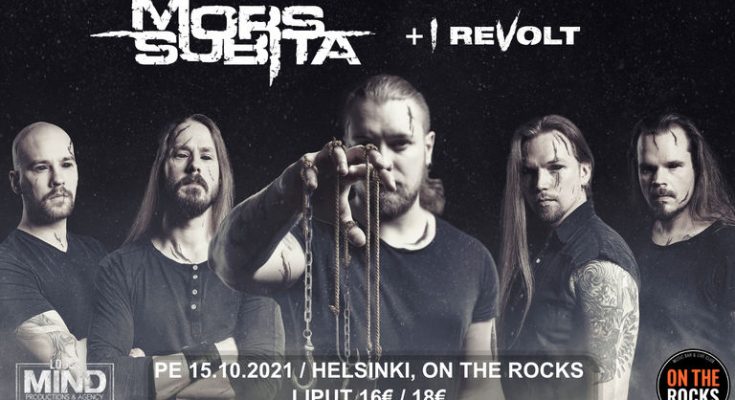 Even though I’ve been living in Finland for nearly 5 years now, I always managed to somehow miss out on seeing Mors Subita live. Lately mostly the pandemic played its part delaying gigs and them having to cancel their performance at SaariHelvetti 2021 this past Summer due to a possible COVID infection. Now suddenly another chance came on my radar with them coming down to Helsinki for a show at On The Rocks, and for once everything seemed to come together just fine to actually see these staples of the Finnish melodeath scene on a stage!

Opening for Mors Subita were the young guns of I Revolt, who have been steady up-and-comers throughout and manage to impress everyone who catches them live. After a banger of a show at SaariHelvetti 2021 during which both crowd and band were melting in the Summer sun, it was good to see them back on the familiar dark grounds of On The Rocks. As usual with these guys, after a short intro they kicked in hard (with their most recent ‘Spit or Swallow’) and never took their feet off the gas. Pedal to the metal and everything turned up to 11, they blew the place to smithereens and showed yet again why many people are praising them to be the future of metal for sure! Tracks like ‘Leeches‘, ‘$uicide Watch‘ and their rendition of Slipknot‘s ‘(sic)‘ grooved away with some kickass riffs and vocals… it was good to see that so many people showed up early to show their support for the opening band, much deservedly so. We’ve said it before and we’ll say it over and over again: keep an eye on these guys!

With the room warmed up pretty well by I Revolt, it was time for the main event of the night: Mors Subita! More people streamed in for a band that is really well-liked within the Finnish and international metal scene. They kicked off their set immediately with 2 tracks of their latest and highly praised album ‘Extinction Era’ with ‘Sick’ and ‘Strain’, of which later ‘Parasites’, ‘Into Eternity’ and ‘Disconnect’ would still get cranked out as well. Besides the strong presence of that album, we also got treated on some Mors Subita classics like ‘The Sermon’, ‘Degenerate’ and ‘The Void’ and all was well. Both the band and the crowd made the energy go through the roof, hair whipping through the air, heads banging like crazy and shouting along like there was no tomorrow. Vocalist Eemeli showed more than once his appreciation and love for the fans who showed up tonight and if felt a bit like a celebration of old friends reuniting. Absolutely killer gig and hopefully a precursor for more of this from now on!