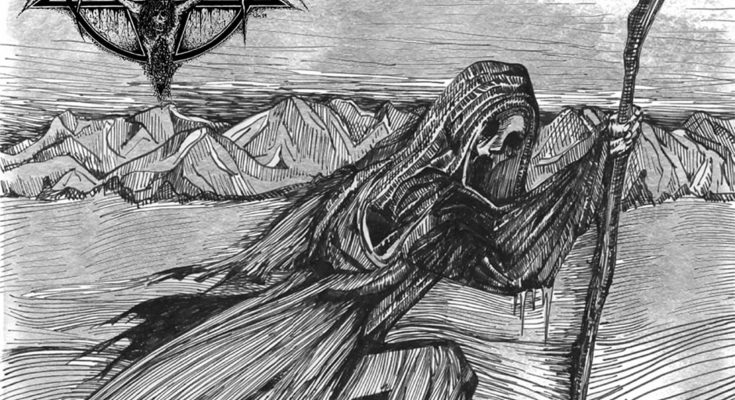 Before light there was darkness and before Arcturus came to existence there was Mortem. A Norwegian black metal entity formed in 1987 by Marius Vold and Steinar Johnsen. Perhaps one of the oldest black metal bands to rise from the Nordic lands beside Mayhem. The band remained silent in the cold depths of the Norwegian black metal scene for over three decades. Mortem is one of the many superstar outfits that features some renowned names like guitarist and keyboardist Steinar Johnsen of Arcturus, vocalist Marius Vold of Thorns, drummer Hellhammer of Mayhem and bassist Tor Stavenes of 1349.

Around the mid years of 1980’s many Norwegian bands were influenced by death and thrash metal music. Although Mayhem initiated as a black metal band there were other bands that brought death metal music into their sound. The British underground label Peaceville Records unearthed such treasure that remained unspoken of in the history of Norwegian metal scene. Mortem was restored in January 2018 and after 32 years they have finally released their long awaited album Ravnsvart.

One of the main aspects of this Norwegian outfit is that it strongly relies on the raw and aggressive sound of the early black metal evolution. The natural adaptation of the old school methods exposes the roots that gave the band immunity from being influenced by any modern trends. In fact, their approach reflects on the second wave of black metal where the comparative relation between Arcturus and early Troll may sound valid. Therefore the music is mostly mid paced combined with old fashioned symphonies of Scandinavian black metal. The opening track Ravnsvart moves into the cruel and venomous direction with the effectual usage of synth and grim growls.

Led by malicious vocals of Marius Vold and sweeping guitar melodies of Steinar Johnsen who also illustrates many symphonic themes on the album. Mortem is like a body driven by the soul of Arcturus, each symphonic arrangement is woven into the body of music to create a haunting feeling. Regardless of the common elements obtained from Arcturus, Mortem succeeded in cementing their own original sound. The tracks on the album are provided with unique implementation and refreshing elements. Ravnsvart is characterized by its raw and archaic atmosphere therefore on the debut album the band captures the true essence of the Norwegian black metal spirit.

The elements on the second track Sjelestjeler are drawn from the symphonic spectrum of black metal and display an intense musicianship between the members. Most of the musical compositions here are linked to Arcturus and the similarities which can be found here are many. First is that the band doesn’t put a big focus on tremolo pickings. As there is a limited usage of the tremolo pickings, Steinar Johnsen duty in layering the cold and symphonic wintery atmosphere can be described as splendid. Another powerful aspect of this album are the drumming skills of Hellhammer, his drumming are more specified between fast and slow paces.

Through the catchy lead melodies executed by the guitars the symphonies are beautifully laid with an effect. The third track Blood Horizon is deeply saturated in melodic portions and the guitar provides the harmonious tone. The approach to black metal comes from the harsh and evil growls, and the increasing use of melodies and rhythm guitar. On Mørkets Monolitter the opening synth evokes a haunting sound with powerful riffs and pacing drums beautifully interlaced. In many aspects the riffs on the album sound average and the music in general isn’t quite as complex as for instance Emperor. But Mortem have managed to keep the flow of the music in such a way that it would grab your senses.

Those who are familiar with the skills of Steinar Johnsen and his impressive work on Arcturus and Covenant (The Kovenant) will notice his influence. The fifth track Truly Damned is full of thrilling moments that puts together the aesthetic melodies and symphonic black metal into one raging crescendo. With Hellhammer’s thundering blows and marching pace on drums, Mortem’s accomplishment on their debut is near to perfection. On other tracks like Demon Shadow the concentration effort is mainly laid upon the heavy guitar resonance and melodic chords. As mentioned above, Ravnsvart is full of fresh elements obtained by the long experience.

Port Darkness is a swirling vortex of blasting drums and raw black metal. Followed by another diabolical track The Core. The guitar and symphonic arrangements on the final track also includes some great guitar solos. As beautiful as the northern lights can be, Mortem’s debut album is an atmospheric black metal record of the highest quality. This is one of the defining phases of the Norwegian black metal chronicles that now has been uncovered. Highly recommended for fans of Arcturus, Odium, and early Covenant.