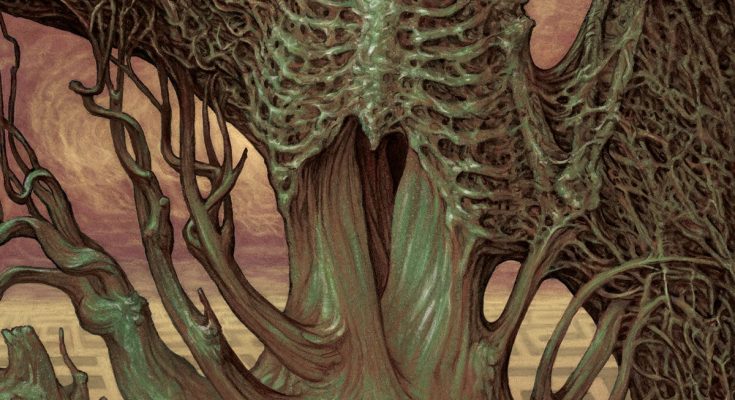 Mortuous debut album Through the Wilderness evokes the chunky riffs of Incantation with horrific manner, this four piece death metal band from California, USA has undeniable talent of becoming one of the best newer bands in the death metal scene. With slight similarities to the Danish death metal band Phrenelith, Mortuous shows a unique form of technicality, though the band has a twisted vibe of sounding old school and surprises the listener with the slow doom passages. The album is launched with the calm acoustic opening Beyond the Flesh where it transforms into a monstrous track of rotten old school death metal. The band is comprised of Mike Beams on guitars/vocals and Colin Tarvin on guitars, apart from these two members the band features Chad Gailey the drummer from Necrot and Clint Roach on bass guitar.Mortuous debut album relies on the churning sound of the guitars, and that’s where the strength lay’s, the death metal riffs and rhythm sections are of excellent quality and the instruments are being utilized professionally.

Bitterness kicks in with organic drums and creeps into slow pacing riffs, the vocals are putrid, sick and inhumane. The lead guitars sound perfect while playing neck-breaking solos. The band switches into a death doom sound by creating uncanny atmosphere. But unlike many albums Through Wilderness is considered fresh and different than most of the traditional death metal records, the debut material is laden with swirling guitar tones of memorable riffs and low growl vocals that makes this record so essential for any death metal fan.

The melodic opening riff on Chrysalis of Sorrow is spectacular, the track includes some fast shredding solos that you won’t hear from any other band. The deep guttural vocals provides the band with inner depth, the guitar performance is top notch, with swift solos and heavy riffs. The slow riffs somehow evoke the style of Incantation but Mortuous’ take on death metal is exhibited by the intense and creepy atmosphere of raw death metal which makes this whole album so immense. The Dead yet Dream is another standout track and it features Chris Reifert as guest vocalist and the solos of Danny Collares from Autopsy at the very end of the song. The slow chugging death doom riffs are very characteristic with the monstrous cavernous vocals.

Prisoner Unto Past booms with blast beats and double bass, and shifts into a straight forward death metal firmness and versatility, the riffs and agonizing growls on this track will leave you paralyzed with a sense of gore. Mortuous indeed knows how to play death metal with visceral quality therefore they have released a successful debut album that will make it land easily on the top of death metal releases this year. However the band can excel with blistering pace of death metal to create dreary sonic contents. And much like the previous track Through Wilderness is another track, where the guttural vocals remind a lot of Undergang and Phrenelith. Screaming Headless, breaks down into putrefaction and brings the heavy chugging riffs and blast beats, this is one has a slow drum beats at the end when the band tends to switch into a captivating mode of the guitar work, it also features a flute passage and short acoustic interlude. Subjugation of Will is a grisly  slab of old school death metal, the drumming performance is intense from the double bass to fiery blast beats, and has some amazing solos at the end. The cover art of the album was made by Marald Van Haasteren who has done some cover albums for the legendary band Bolt Thrower and Necrot.

Through Wilderness is consists of nine tracks of putrid death metal with doom infused elements. The album has an integral work from the grisly cover art and the top notch performance, where each track connects with the other very naturally and has a pulverising feel to them. The production and song writing makes you feel that this band is very experienced to release such a massive material like this. So among the many worthy death metal albums which has been released this year Mortuous outshines the most, and for this reason their debut album feels fresh and unimpaired. This is a brutal release that will please many death metal fans with its purity and pervading grunts.

Release Date : June 22nd, 2018
Label : Tank Crimes Records
Track list :
1.Beyond Flesh
2.Bitterness
3.Chrysalis of Sorrow
4.The Dead Yet Dream
5.Anguish and Insanity
6.Through Wilderness
7.Prisoner Unto Past
8.Screaming Headless
9.Subjugation of Will