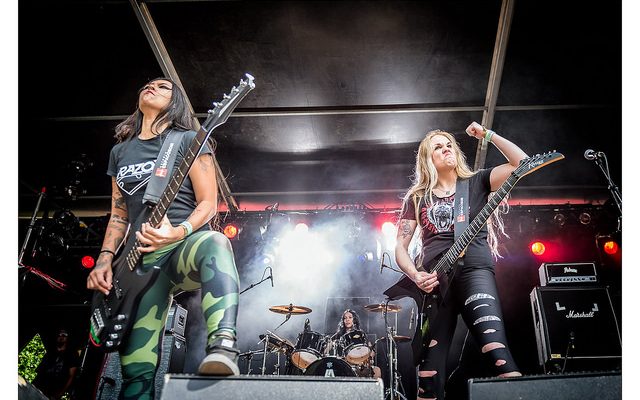 I meet singer Fernanda Lira from the all-female Thrash metal band Nervosa at Antwerp Metal Fest. In the press room we can hear the music from the bands playing outside. She greets me enthusiastically, and she won’t lose her enthusiasm for the rest of the evening.

Fernanda: “I envy all of your festival bands!”

Can’t you organize one yourself?
I would love to, but we don’t have the time. It’s too fucked up. We have a couple of festivals, mainly in the South, but it’s not like Orbituary, Death Angel and more great bands on the same day! (laughs)

Did you already go to festivals where you weren’t on stage?
Yes, I’ve been to Wacken Open Air when I was 18, I came hitchhiking with a friend of mine from Brazil. But after that we only visited festivals while playing.

How was the show today?
It was really nice, we enjoyed it. We love playing in Belgium, the fans are so nice, so we were looking forward to this festival. It was hot on stage! But It was a good stage.

You have two more shows in Belgium this year, so you’ll be back soon.
Indeed, we’re touring through Europe. We seriously have a lot of shows this summer.

How is it to have so many shows?
That’s exactly what we want to do. We tell our booking agent “Do whatever you can to book as many shows as you can” because we just want to be out there, making music. But when he comes back and he tells us “There are fifty shows” then we’re like “What?” (laughs). But we still enjoy it. We love everything we do. Everything we do when we’re at home, like spending 4 hours answering e-mails, and that kind of stuff, is so we can have this dear moment on stage. So if we can have this dear moment 100 times a year, then that’s going to be awesome. We love to play, that’s the reason for everything we do.

You also have an album that comes out in 2018, you’re writing while touring. How do you combine that?
It’s difficult, this is the first time we’re writing on tour. We had an album last year which we’re still promoting and we have half of a new album now. We’re writing stuff because our heads are exploding with ideas and also because we won’t have much time when we’ll be home to finish the album, but we’re doing everything naturally. You can’t force writing or it’s going to sound like shit. We’re lucky enough to have a lot of inspiration! We have two and a half month, we have to do something productive besides playing.

How difficult is it to write stuff while touring?
I think I’ll notice the difference more in a month or so. But when I’m home, I’m more relaxed and I don’t think about the band very often. I think about the people who are dear to me: my friends and family. I want to hang out, do stuff, eat Brazilian food that I haven’t eaten in a while. On this tour, we need to take the time to play and write, so it’s less relaxed than when we’re home. When I’m on tour, it’s all related to the band so it’s a good moment to write, there’s nothing to do except playing. When we have a 6 hour trip until the next city our heads are exploding with ideas.

What kind of influences will there be on the new album?
Our new drummer, who’s writing our new songs with us, comes from an extreme death metal band, so she might bring more aggressiveness to the songs. It might sound a bit more like death metal than thrash metal, but there will still be thrash metal because we’re a thrash metal band. We’ll probably be more death metal-influenced.

Your drummer, Luana Dametto, joined you guys this year. How is it with her in the band?
She’s been doing just great. Wait, is that Evil Invaders playing outside?

Yes, they are on the mainstage now. I’m interviewing them later.
They’re playing Exciter, that’s cool! (starts singing along) Sorry!

So our last drummer left in the middle of the tour, it was a very tough time. But I think, and I hope, that Luana is the right one. We feel she’s the right one. I’m of course so thankful for the previous drummers! They did their contribution to the band. But I think Luana is just like us. Being in a band isn’t just about being on stage and thinking the same way musically. I think it’s about it’s about thinking the same way, having the same objectives. With the other drummers it wasn’t like that. Just an example: our last drummer wanted to be more at home and get more money. But we can’t be a lot at home and we don’t get a lot of money, so you just can’t be on the road with someone like that because after a while she’ll feel sad, annoyed and uncomfortable. And that’s what happened with our last drummer. What I liked most about Luana is that she quit college after auditioning with us, and that’s a big step! She said “I’m going to be in a band and I want to live from the band”, and that’s the attitude we have. Prika and I for example, we quit our jobs (I was a journalist before), we quit college, we quit seeing our families and friends regularly, we broke up with our boyfriends, because we wanted to be on the road. And she got that spirit from day 1. We feel she has the same vibe as us, she wants to be on stage the same way we do. And that’s the most important thing! Having the same musical vibe isn’t enough. I think it’s more important to have the same vibe as a person. You have to have to same objectives, otherwise it’s not going to work at all. And we feel that with this new drummer, she’s going to be here for a long time. And she’s contributing a lot to the new songs: more aggressively, more technically, so I think it’s going to be a good one for our next album.

You guys only started in in 2010, had your first demo in 2012 and then you went on a lot of tours. How does it feel to grow, and grow so fast?
First of all we’re very thankful for how fast things have been going with us. Of course, we work hard. We left a whole life aside to focus on the band, so we kind of expected something back for it. But it’s just happening too fast too fast for us, it’s just so great! We’ve been playing at places we never imagined we would be playing before we would be playing for a much longer time. We work a lot, but we’re very thankful that things happened very fast with us. We just want to keep it up. Sometimes people think that when we post a picture with Destruction on our dressing rooms, we’re used to that. We’re not! This means a lot to us. We never imagined we would be there so we try to keep it up because we like this. We like to make people happy in our shows. We want to work hard to keep things going on and to make things happening for us and that’s where we really want to be.

Do you have tips for new people who start a band?
First of all: do what you feel you’d like to do. You should never be forced to do something because you believe that’s right. You have to do what you believe is right. I see many bands out there who are afraid of what their parents would think, if it would affect their relationship with someone, or what people would think of it… That’s not the right way to think to think. You have to follow your dreams. This is not only about bands, I would give this advice to anyone out there. If you’re a journalist and you believe this is the thing for you, you should just do it. If you feel this is the right thing and you have the guts for it, it will eventually happen. This is what happened to us as a band. We didn’t care what people think – and people have said a lot of shit – we never cared about what our family would think, we never cared about anything. We just followed our passion, we followed what we thought was right and it happened. I think the truest it is you wish, the most likely that it will happen. Just believe in yourself, stick to your deepest wishes and it will turn out good. Just don’t give up on your dreams because then, you’re lost.

How is it to be an all-female thrash metal band?
I think all girls in the metal scene are important, it doesn’t matter which style or genre they’re singing or playing. Because numerically, it’s a fact that there are less girls than boys. It should be equal. All of us know some girls who like metal, and there are a lot of them. So it should be something equal and I appreciate every girl who is out there believing in themselves and following their dreams. But it’s different to an all-female thrash metal band because there aren’t many out there. So we’re here, not only to fulfill our wishes and show that we can do that, but also to inspire girls to think “Okay, we’re girls who want to have a thrash metal band, we can do it! If they made it, we can make it too.” That’s the most important message, that’s the best part.

Is there something else you’d like to tell our readers?
I would like to thank everybody. You guys, you help spread our music and our message around. And thank everyone involved in the gig. But mainly the fans, because without them we’re nothing. Thanks for all of you guys who are reading this, and who support us and all metal bands. Together we are strong! 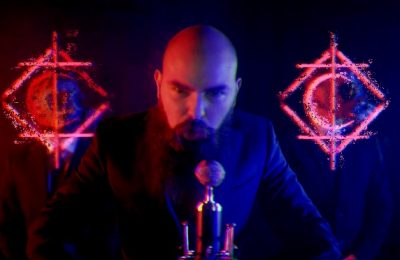