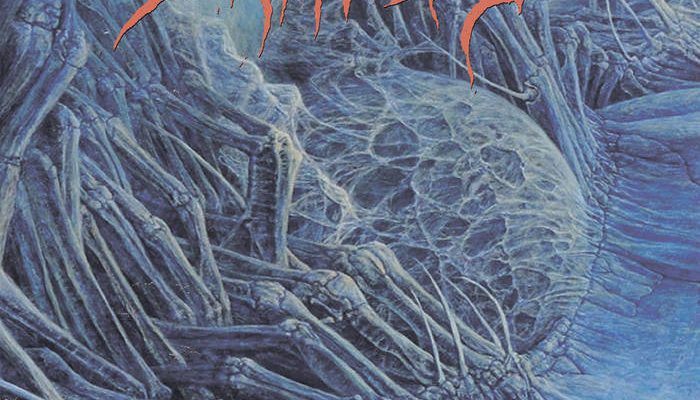 On September 17th, 2021 Atlanta’s based death metal outfit Occulsed will debut its first studio album ‘Crepitation of Phlegethon‘ via Italian underground label Everlasting Spew Records. Formed in 2017 by the vocalist Kenneth Parker, guitarist/bassist Justin Stubbs (Father Befouled, Encoffination) and drummer Jared Moran, the influence of rotten death metal is apparent on the vocals spewing putrid vomit, bringing a sense of grisliness. Occulsed released its first demo ‘Cenotaph to Pudridity‘ in 2019 which was followed by another demo ‘Ceremonial Lifelessness‘ in 2020. Musically the songs are steeped in a cavernous old school style of death metal where the guitars and the monstrous growls convey a horrifying experience. The impact of the bludgeoning drums moves into different paces. Across the length of thirty-three minutes, the drums pummel the listener with intense blast beats.

The opening track ‘Unction of Muliebrous Broth‘ sets the musty foul tone of the horrid vocal emanations. The songs are stuffed with gory tales of cannibalism and old-school death metal putridity as they veer into fast drumming. However, the hollow atmosphere of the instrumentation has a sense of primitivism. Occulsed takes inspiration from Floridian death metal. The slower pacing of the drums ventures into the thresholds of death/doom metal which allows the songs to alter between different tempos. ‘Peryphlegethonic Mindflaying‘ is one of the rawest tracks. Despite the constant shift in tempo, the guitars trudge with the slow-paced drums. ‘Crepitation of Phlegethon‘ is emphasized by caveman riffs, the vocals spew sickening grunts and cavernous growls that will give you the creeps.

Some of the riffs share strong similarities to the U.S. death/doom bands like Father Befouled, especially when the guitars apply that doomy atmosphere. Despite the lack of guitar solos, the songs are rather fast: the double bass on ‘Thou Butcherer of Human Folly‘ kicks in with brutal drums beats. Bringing the same variations to the songs, the intense savagery of the putrid riffs is followed by low-pitched guttural growls. On each track the eerie, gruesome quality resonates as the riffs horrendously drip with the ghoulish atmosphere on ‘Lurid Placeless Echoes‘. The appalling artwork of the album cover is designed by Zdzisław Beksinski whose creative work imbues a sense of old-fashioned ghastliness that is very similar to the nineties death metal cover albums. Occulsed conveys a macabre feel through the brutish death metal components which are focused on making the songs full of rotten riffs and gore.

There are moments when the band shows brutal death metal influences and they are usually implemented when the drums generate more force to increase the tempo. The raw tone of the guitars is steeped in cavernous underground-styled riffs. Admittedly, Occulsed plays their own brand of death metal. The entire set of songs is soaked in deep gore-themed lyrics. “Crepitation of Phlegethon” revels in zombified growling effects that merge well with the guitar chugging. ‘Between Engorged Realities‘ serves as an ambient instrumental piece with the dreadful effects of the guitars churning a sense of abomination. ‘Concupiscence of Frenzied Humors‘ conveys a morbid sensation in which the guttural growls are reinforced by the crispy riffs. Drowned in the macabre fashion of ancient death metal, Occulsed uncovers their fundamental influences. Therefore, the songs are pure and simple.

Filled with unspeakable horror and repulsion, ‘Tendon Pandentum‘ morphs into straight brutal blasting. The pacing changes smoothly between the slow doom styles of Incantation resulting in ghastly vocalization effects. ‘Death of Ratiocination‘ is a barbaric piece of old-school brutal death metal. The composition here is charged with piles of brutal riffs. Suddenly the low guttural belch coalesces with an endless barrage of intense riffing. Midway through the track the guitars unleash solos and eerie melodies that seemingly bleed through on the album-closing track ‘ Glory of Woe‘. This instrumental outro imbues a blood-freezing peculiar quality as it slowly dips into the acoustic waves.

Occulsed debut album ‘Crepitation of Phlegethon‘ is a bone-crushing death metal record that permeates the foul atmosphere of subterranean charnel. This is recommended for fans of early Cannibal Corpse, Father Befouled and Incantation.