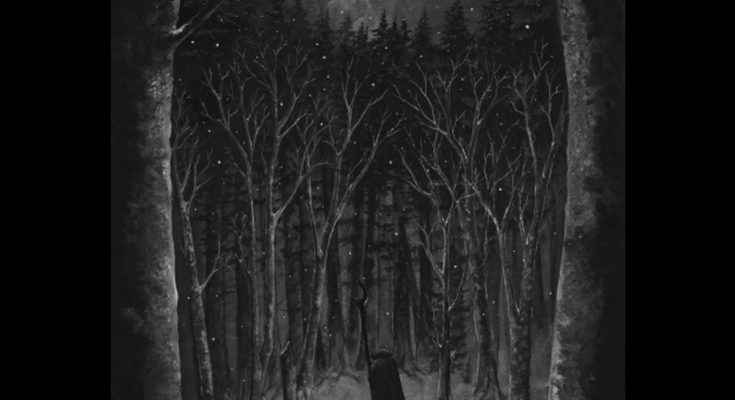 The year 2020 sees the return of Tobias Möckl aka Wintherr, the mastermind behind the black metal/ambient project band, Paysage D’Hiver. Formed almost two decades ago in Bern Switzerland, the sole member is also active in the black metal outfit, Darkspace. Paysage D’Hiver is a French word that translates to winter landscapes. Since 1998 the multi-instrumentalist demonstrated a lofty art of lo-fi black metal. Within the expanding discography, Tobias Möckl released numerous demos and split albums. Thus the time has come for the band to debut its first full length album, titled ‘Im Wald’. Musically, Paysage D’Hiver has extracted the atmospheric patterns from bands such as Burzum. However, the quality of the debut album portrays the rich and atmospheric harshness of the multi-layered guitars.

‘Im Winterwald’ opens with straightforward blast beats. The mesmerizing music creates a thick, foggy haze that resembles the hallmarks of the lo-fi black metal. Paysage D’Hiver channels a broad spectrum of the multi-layered synth. The drums on the album are fast-paced and break into a torrential blizzard-like storm. The songs cover the full range of the cold wintery fashion of atmospheric black metal. Since the music itself derives its themes from the vast cold landscapes of the ice-capped mountains. This often results in many hypnotizing and majestic soundscapes that are beautifully layered within the song textures. One of the mesmerizing methods is the manifestation of the ominous, high pitched vocals that are displayed in different tones as they contrast with the tremolo-picked guitars. Throughout this prolonged album that spins for two hours, mastermind Wintherr emphasizes the repetitive riffs.

Each of the thirteen tracks projects the sonic art of tranquility and opens a portal to spirituality whereas the songs act as a medium for contemplation. ‘Im Wald’ is graced with Nordic inspiration as it weaves the raw prospect of black metal with some catchy tremolo pickings, backed by the grandiose synth work. ‘Alt’, for example, erupts like the tempest chilling winds. The song is full of dense guitar riffs and low pitches. The surging tremolos interweave across the dark melancholic synth while the song fluctuates between mid-tempo and straight blast beats. The potency and meditative effect of the music will transfer the listener to the frosty realms of bleak darkness.

‘Im Wald’ brings many varieties to the listener: the wind samples on the next track, ‘Wurzel‘, pairs well with the droning guitar segments. While the male choral builds up a dark and mesmerizing theme to the track which follows. ‘Stimmen Im Wald‘ is structured upon the beautiful choir. This also proves that mastermind Wintherr emphasizes sonic creativity. This makes the songs quite integral, distinctive and consistent, while the raw quality of the guitar riffs evoke the sharp and buzzing sound of black metal. This manifestation denotes that Paysage D’Hiver’s song composition is dense, multilayered and swathed in a dark foreboding atmosphere. ‘Im Wald’ is soaked in different compositions that come from the ambient elements and also have a sophisticated notion to its aspect.

‘Flug,’ for example, weaves the ambient atmosphere with the bleak dramatic arrangements of the guitars. This multilayered approach creates a deep and multi-dimensional feel to the music. The ambient elements on ‘Le Rêve Lucide‘ are beautifully textured and they act like a backdrop to the songs. With the dark effects of the thick guitar arrangements, Paysage D’Hiver presents its sublime art of crafting surreal and ambiguous melodies. The hallmarks of creating this kind of melodies are brought by a profound state of pure emotions. In other words, there is a rough texture that contrasts with the semi-symphonic synth work.

Apparently, the final tracks, such as ‘Kälteschauer’, maintain the fast-paced momentum. Whilst the swirling guitar work is focused on the sharp tremolo pickings, the high pitched vocals become more intense. The unique mid-tempo transitions on ‘Weiter, Immer weiter’ reveal the sonic aesthetic style of blending the atmospheric guitars and drums with the spectral growls. ‘So Hallt Es wider‘ is the final track that lasts around nineteen minutes. It’s built on a menacing element of ambiance and lush guitar work.

The song is structured on eerie soundscapes that are produced by the swirling atmosphere of the guitars. Through these ominous moments, the atmosphere intensifies as mastermind Wintherr blends some dark and spooky sounds. The gloomy tone of the guitars continues to reverberate as it depicts a grim sensation. Till the final moments of the debut, the music projects an extraordinary level of a musical scale. Paysage D’Hiver’s first installment is quite lengthy, but it adheres to the obscure foundations of what this project band has presented in the past. ‘Im Wald’ will take you deep to a spiritual voyage to the cold icy plains of the vast, wintery realms. This is certainly a modern masterpiece of lo-fi black metal.