Home Extras PICK YOUR POISON: The Ministry of Belgian Beer & Kraddel’s Give My People Black 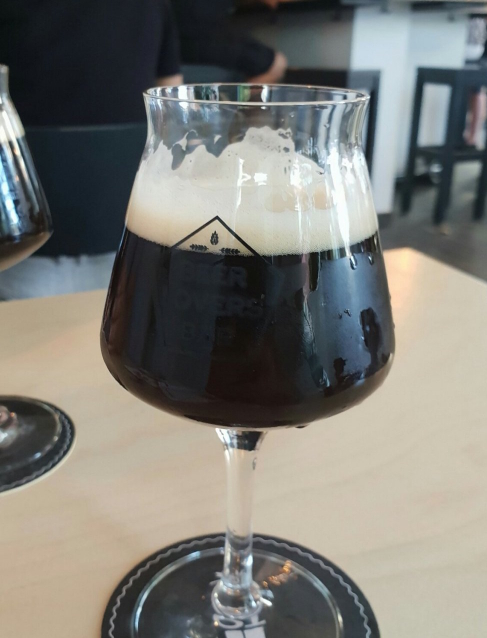 Ratebeer tradition dictates that when someone is about to check in his or her 10.000th beer, they ask a brewer to create a beer specifically for them. Dylan Verduyn of Siris About Beer, aka Kraddel on Ratebeer, did more than just that. He created 10 different beers, in 10 different styles, with 10 different brewers, each beer dedicated to a certain metal band that inspires him. Unfortunately, we missed the release party 'Kraddel's 10K Madness' in Beerlovers Bar (Antwerp) because we were on our way back from the Belgian Invasion of Metaldays in Slovenia. However, we hunt down the few remaining beers to share the story behind it with you!
Tasting
We arrived in a fully packed Hal 16 in the north of Ghent where an Amy Whinehouse tribute band was making the crowd shake and dance on this lovely summer evening. It took us a while to get hold of a beer as most people where asking for 'just a bier' or 'a sweet kriek, please'. Not a good idea if you look at the wide selection of 30 taps Dok Brewing Company has to offer in its brewpub. In the end we managed to sneak outside again with glass filled with the pitch black Give My People Black. Absolutely no light shines through this one. On top is an off-white head. The aroma reveals some roast and licorice. The mouthfeel presents a light body with light to medium carbonation. The main body and roast comes in the beginning of the taste. Afterwards different lighter characteristics reveal itself. It tastes herbal, almost minty with hints of bell pepper and tea. In the end we get the soft heat of some peppers!
It is difficult to argue with a recognized BJCP Beer Judge as Dylan but I'm still having difficulty seeing this as a Baltic porter as described by the brewer. Knowing the base consists of the quality of a Pils 13 with dark malts thrown in the mix and my own taste experience I would still go for the style of schwarzbier. Mind you, a very unique schwarzbier that is! There are definitely some aspects that distinguish this dark brew from any standard dark lager beer. Some fellow drinkers argued it had the potential to be a black IPA if it had been a bit more hop forward. In any case, it was clear we had a lot to discuss while drinking this beer!
The story
Each beer is accompanied by a song by a metal band that inspires Dylan. In this case, Give My People Black is inspired by King 810's 'Give My People Back'. A lot of thought went into combining the right song with the right brewer. King 810's song 'Give My People Back' is a charge against unemployment due to industrialization, shipping jobs to low cost countries and with it the cause of a lot of social problems. Therefore, Dylan picked this song for a beer brewed with The Ministry of Belgian Beer. With their Pils 13 they take a stand against the industrialized lagers who take profit before quality and even well-being of the people who work for them. They don't use sugar, rice, corn or any other additions that do not belong in a pure crisp pilsner.
As with all 10 of Kraddel's creations he went as far to adapt some of the lyrics of the original song to reflect something about the beer and the story behind it. Sing along with this new version of the lyrics:

When these lagers suck, it hurts.
And when they’re compared to me, it’s worse
Tell me, what’s this all worth?
Cause I am hot, and they’re not, fit for life on earth.

In the meantime, Dimitri Messiaen of The Ministry of Belgian Beer has teamed up with Hedonis and L'Arogante, two other respected Ghent-based brewers, to open Dok Brewing Company. Be sure to visit this gem when visiting Ghent!
Curious to hear more about Dylan's crazy ideas and visions about beer? Be sure to follow Siris About Beer and learn more your favorite liquid!