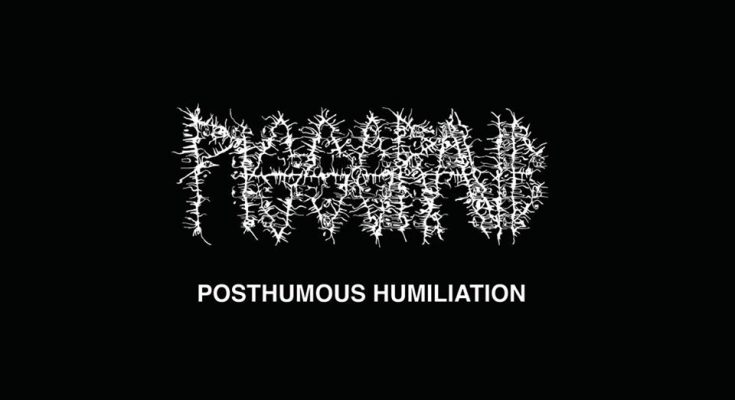 Seeing the most disturbing and disgusting album covers which immediately can draw an urge of repulsion and utter sickness. Philadelphia’s underground metal squad Pissgrave play an extreme type of death metal with old school inclinations. Flooding out like a running rivers of sewage from the U.S. underground scene, Posthumous Humiliation reeks of overwhelming rancid. Pissgrave’s musical style is similar to Infester and Deicide, this is a gory death metal album soaked in filth and debris.

Their 2015 album Suicide Euphoria was highly acclaimed by fans of death metal, and with the same lineup Pissgrave now delivers another brutal album that has some influences from grindcore. Tim Mellon and Demian Fenton handle the shrieks and the inhuman vocals, with the drummer Matt Melon and bassist Brad D, who are responsible for the sonic plague of Posthumous Humiliation. This is absolutely a barbarous album built upon the raw energy of the blast beats and raw guitar riffs.

All the tracks here burst with raw power of the gutturals growls, distorted riffs, impelled by the noisy chaos and the sickening sensation. There is no doubt that Posthumous Humiliation will make it through the top list of many death metal fans this year. The intermixture of several death metal styles are mashed with old school death metal. Pissgrave is a hybrid mixture of Deicide, Infester and Incantation, the latest offering from the Philadelphia’s inhuman squad is very bold, the tremulous effect of the rapid riffs are quite extreme and intense.

The album begins with Euthanasia which is dominated by the grinding drums and extremely distorted vocals and churning death metal riffs. The first track will have you discharge the contents in your stomach. The spreading of the sonic plague Canticle of Ripping Flesh is another agitating and horrifying track formed by the raw pummeling drums and the violent riffs which mostly sound very down tuned on this album.

In fact Pissgrave doesn’t bring anything new to the table, but their approach to death metal is quite brutal. The vile sound of the vocals are triggered with plenty of guitar chugs and hammering drums. The blast beats are executed in war metal style which can bring bands like Blasphemy, Teitanblood and Black Witchery to attention. The album is overwhelmed by the sadistic brutality and unharmonious guttural growls, which are oddly suitable for extreme metal. The Philadelphia quartet have a horrid flexibility in demonstrating an abhorrent kind of disorder. Posthumous Humiliation is a sickening and violent death metal album that maneuvers between the sadistic and ghoulish underground death metal style.

Pissgrave implement series of tremolo riffing, at times they sound like Incantation, Catacombs of Putrid Chambers is one the brutal tracks that creeps in with the high piercing screeches. The album is like a roller coaster ride, Posthumous Humiliation isn’t a fast album there are many tempo changes in tracks like Into the Deceased. The effort is to create a violent and brutal sense of disgust, Pissgrave is a shocking and sickening album, and the sound is brutally trembled by the deep guttural growls.

The most strenuous effort is laid upon the harshness and the devastating sounds resulting from the bold riffs and shredding solos which sound like a ripping bodies. Emaciated and Celebratory Defilement continue with bludgeoning blast beats, some reminiscence of Mortician and Cannibal Corpse comes to mind while listening to the album. Rusted Wild incorporates some doomy riffs that sound like a mournful dirge.

Perhaps a little diversity was needed at the album closure, Posthumous Humiliation is a fucking pure death metal record that has its own sound and identity. Regardless of other influences Pissgrave has released one of the strongest albums in 2019.