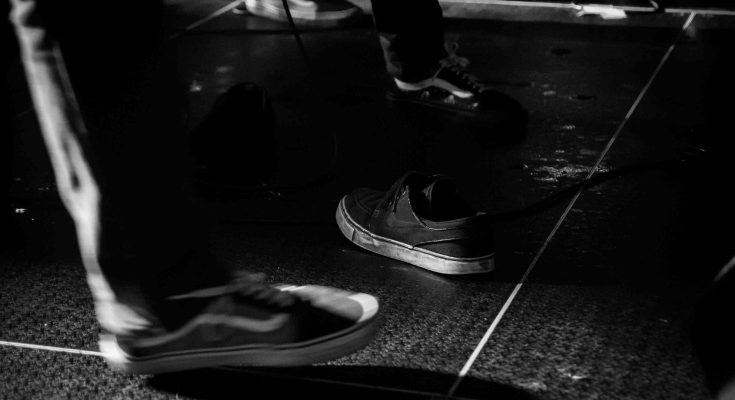 Several years ago I accidentally stumbled into a venue where Swedish punk rock band Satanic Surfers had to play later that night. Of course I stayed – ’cause with a name like that I’m curious! – and I was immediately sold. So there’s no surprise in me rushing for a ticket when I heard they’d come back to Belgium. And I didn’t regret it for one second.

Satanic Surfers have a special kind of bond with Belgium, or rather with the Belgium punk rock family. They know the Belgians as the coolest, yet craziest bunch on the planet and the crowd totally proved them right. The show took place at Elysée in Ostend and coincidentally the band felt a certain kind of nostalgia there. Their very first gig in Belgium was in Ostend actually and they were more than happy to be back. Even while it was in a tiny basement, no fucks were given this evening.

The place was -sometimes literally – packed to the rafters, it was warm, the lighting wasn’t fantastic but that didn’t matter at all. We were at less than 500 meters from the beach, there was cold beer and the sound was great. And above all the atmosphere was exactly what you’d expect from a Belgian punk rock show. Some things that always catch my eye when at a punk rock show came forward here as well. The mere number of band shirts and signs of support within the genre is a-ma-zing! Also the bands are super approachable and the social engagement of these guys is top notch.

In true punk fashion Satanic Surfers didn’t just bring a support act along. no sir, they gave no less than two local bands a spot at the beginning of the evening.

First up was Wasted 24/7 (***). A fun bunch from Bruges that brought a refreshing kind of technical pop punk. Technical in the sense that they played tight as fuck and especially the bassists use of chords and high register caught my eye. I’ve also always loved the marriage between a classic Stratocaster and a nice and sturdy Les Paul in the guitar section, but when the Les Paul is an early Japanese Greco copy, you have my full attention! 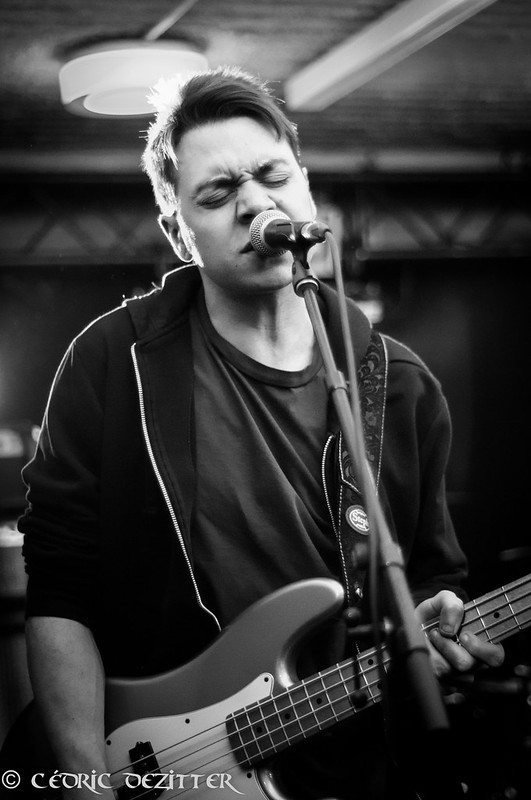 Next in the line up was Breelers (***) or BRLRS for short . A fairly young band from Ostend that went fast ‘n’ loud, just like we like it! They had a nice balance going on between the typical groovin’ bass player and the singer going bat shit crazy, having the crowd eating out of his hand from the first minute. They dedicated a song called “Kip Aan ‘t Spit” (or “Rotisserie Chicken“) to Joke Schauvliege – minister of environment in Belgium. Funny side note: Schauvliege was known for her incompetence and was slightly forced to resign after telling lies in public and several votes of distrust. These guys were on to something. 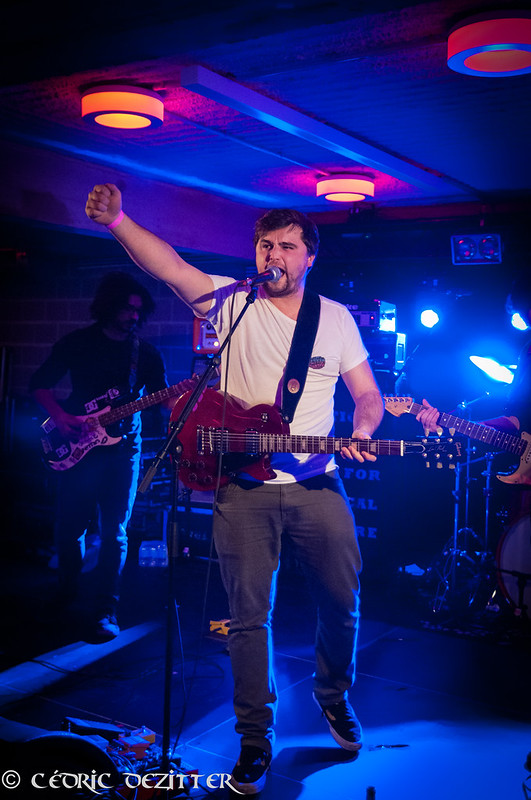 P is for Politics

I believe NOFX sang the enlightened phrase: “If you think that punk rock doesn’t mix with politics, you’re wrong!” in their world renown punk ballad “You’re Wrong“. And they were so, so right. here to deliver proof were the Dutch collective Antillectual (****). A very socially and politically engaged old school punk trio. For example, check out the massive sticker on Willem‘s guitar. It says FCK PVV meaning Fuck the Freedom Party – an extreme right wing (and frankly racist) party in the Netherlands. The next piece of evidence is their songs. Titles like “Change the Standard“, “Heads You Win,  Tails We Lose” and “Some of My Best Friends Are Meat Eaters” are pretty straightforward and carry out a certain message. And that’s exactly what Antillectual wants to do. 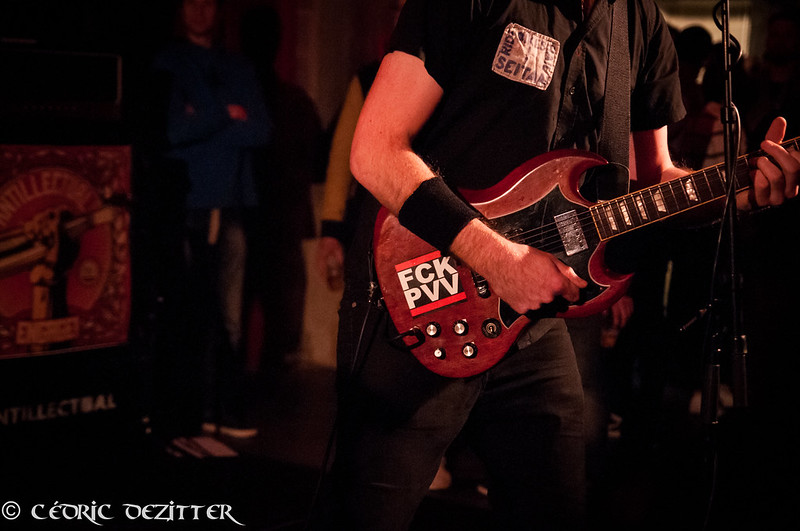 Antillectual‘s vision goes beyond their music. When visiting the merchandise stand they didn’t just explain how all their merch is certified fair trade. They also handed out a bunch of freebees, anti-fascism pamflets and flyers and stickers about veganism, gender equality and anti-homophobia. Luckily these guys don’t just talk the talk. They walk the fucking walk as well. Antillectual doesn’t only have an opinion. They have the songs, the show (even their amps are themed!) and the extreme energy to carry it out as well. If you can make a few hundred people chant: “When your invisible hand meets our visible fist. Trust me we’ll take a stand. Together we will resist!” you know you’re doing something right! 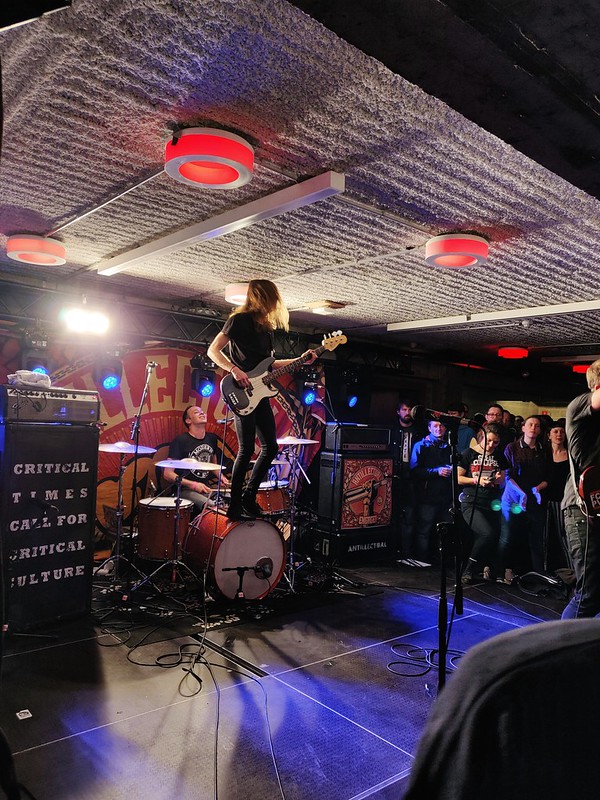 Eventually the moment we had all been waiting for: Welcoming Satanic Surfers (****) back to Belgium. The band had changed a bit when it comes to appearance – Rodrigo lost his dreadlocks, Max grew his hair longer and Andy and Magnus seem to have grown even bigger! –  but their spirit remained the same and they were stoked to play in Ostend again after close to twenty years and showed it from the very first moment. And the crowd reacted! Max played his first few notes, Rodrigo set foot on the stage and Elysée just exploded! 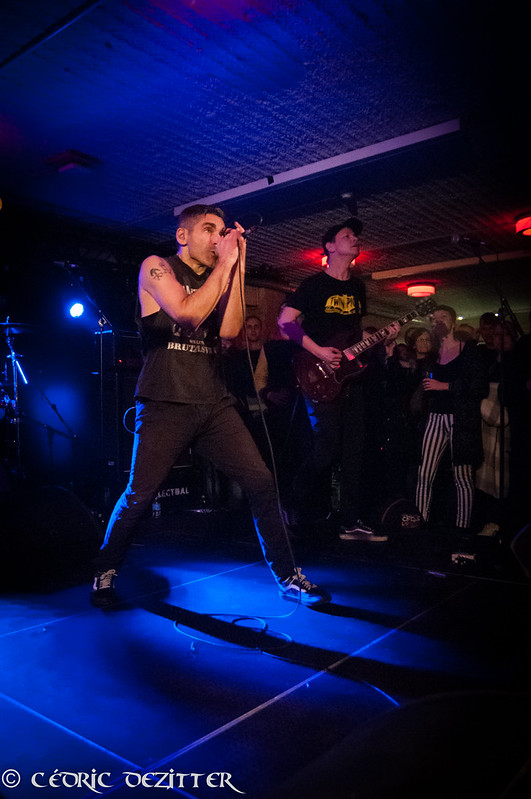 A mosh pit broke out, people tripped and tumbled over the monitors, the speakers trembled even when silent, … In short: Shit got fuckin’ crazy! And that’s what a Satanic Surfers show in Belgium guarantees you! It got so heavy that taking pictures was no longer possible to the extend that Max saw me protecting my gear and invited me up on stage to shoot from the corner. As things got out of hand gear was not spared. The bass cable got disconnected several times, Max got hit in the face by his own falling microphone four times (and decided to put it aside whilst not missing a single note), Rodrigo followed the dozens of crowd surfers even though there was less than half a meter between the heads of the crowd and the ceiling, … 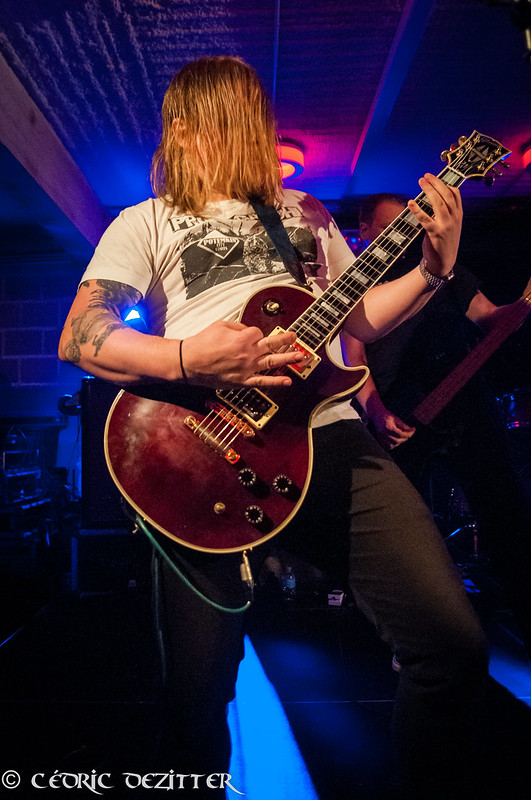 As time passed by people lost shoes, sweaters, … and as shit got crazier and crazier Elysée got hotter and hotter and Toon from Antillectual was kind enough to hand out some water to the people on the front row who craved refreshment. Somewhere amidst all the rubble there was room for a moment of serenity. They dedicated the song “Hero of our time” to a recently deceased friend of a group in the crowd. An emotional moment for some as they rocked out together and showed their gratitude towards the band. A fantastic moment to be part of.

After the show the bands made time to talk to and have beers with the fans. In conclusion I can only say “Wow!“. If you’re gonna see a punk show – no matter how big the band is – do it in a small venue, act like the rest of the crowd, enjoy every minute of it and get carried away by the bands messages. You’ll be part of the punk rock family in no time!

Check out all the photographs right here!