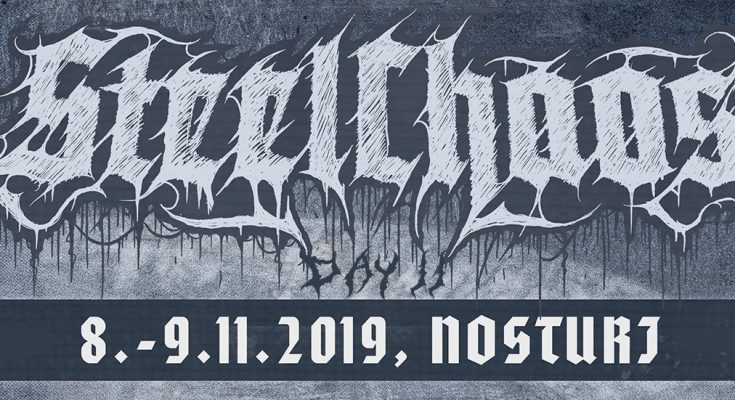 To kick off the second day of Steelchaos, we got some relentless second wave black metal by Barshasketh slapped in the face. Original founder and vocalist Krigeist was belting out growls and screams with great passion like there was no tomorrow, literally bending over backwards while cranking out dissonant riff after riff. An absolutely great start of the day, Barshasketh is joining my list of black metal bands to regularly listen to.

Only one Finnish band the second day and it turns out to be the only death metal band of the whole weekend. Earlier this year Krypts released a highly impressive new album and absolutely crushed it live as well. The brutality of death metal that only became heavier when slowing it down by adding a bunch of doom elements, probably both the heaviest and slowest act of the whole weekend… Steeped in darkness, smoke and the sporadic light beam, it felt like they were working hard to open up a portal to another dimension filled with behemoths that could crush you with their small toe, much like the Lovecraftian theme they sing about in their musical creations.

After the crushing sets we swallowed earlier, the more sophisticated kind of music that The Committee brought us was actually a welcome thing. This international collective consists of musicians that normally make doom metal and that is partially apparent in the more atmospheric black metal. The completely masked outfit was very intriguing with at times a sound mixed completely different than what we’re used to in black metal. There were several moments for instance that the bass was very front and center making the impressive talent of the one playing it highlighted strongly.

When talking about the Norwegian black metal outfit Nordjevel, sophisticated would be the last thing that comes to my mind. At the start of the set, all members except for vocalist Doedsadmiral stood on stage with their backs to the crowd and enveloped in smoke, which would be the calmest moment for the next hour or so. Then Doedsadmiral joined the ranks, bones, blood and spikes and all, and the onslaught could begin. The band raged through song after song with an amount of strobe lights used from start to finish that could make almost anyone feel nauseous. The only relief from that were the brief moments between the songs. This set was blistering in more than one way…

The originally Norwegian outfit Ancient brought back some relief with their at times epic sounding melodic black metal. Their set consisted of their debut album ‘Svartalvheim‘ played from start to finish, which brought us that old school sound they’re known for. The cold and dissonant melodic music reminded me somewhat of for instance the early days of country mates Dimmu Borgir and that’s nothing to complain about. The symphonies used to back up the music at times even made me think of old school Finntroll and works like that. Throw on top of that the rather imposing stature of only original member and vocalist Zel, who somehow looked like a black metal Christ, and you simply get a great show.

Headliner of the last day, somewhat follows the recipe of the day before. After getting Destruction ripping the place up last night, we get another member of the “Big 4 of Teutonic thrash metal” with Sodom. This German thrash band, headed by Tom Angelripper has a quite legendary statute with their war-centered themes and evil touch overall. They played a nice selection from most of their career and the crowd went absolutely bonkers. Moshpits, crowdsurfing, constant headbanging, flying beer,… it had it all. Looking at how full Nosturi was that late in the night and the sheer excitement, Sodom returning to Finland in May next year for Steelfest 2020 to play an exclusive set with their first ever EP ‘In the Sign of Evil’ and full-length ‘Obsessed by Cruelty’ played in full, will be an absolute bombshell!