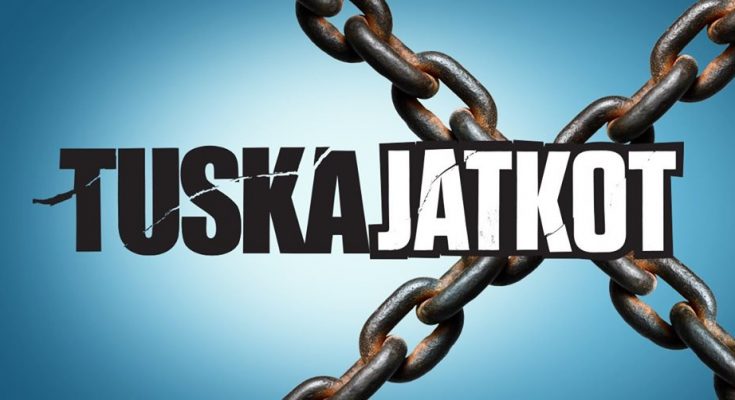 Tuska 2019 was a blast again. For those who weren’t satisfied enough yet by what took place during the day at the main event, every night there were several afterparties in the city center of Helsinki. At Virgin Oil Co on Friday and Saturday you could find some of Finland’s best metal and rock bands that are up-and-coming while there were DJ’s at On The Rocks. On Sunday, Virgin Oil Co didn’t get an afterparty, but On The Rocks hosted a showcase of modern Finnish hard rock!

Since the afterparties start every time when the headliner of the day is still playing, it’s kind of hard to be able to catch the opener of the night. So sadly, I had to miss out on Pulse, the Finnish tribute to Pink Floyd. A pity as I enjoy me some Pink Floyd from time to time!

I got there in time to see most of the second act, though. The thrash band Misterer released earlier this year their album ‘Ignoramus‘ and came to present themselves with that music under their arms to the Tuska crowd that made it all the way to the venue. Their music is pretty cool and groovy, but what makes this band rather special, is having their drummer center stage at the front. And on top of that their drummer is actually the frontman of the band at the same time.

Finnish people might recognize Mikko Herranen, former member of several influential Finnish bands and participant in 2012’s ‘The Voice of Finland’ competition. The multi-instrumentalist with a visual impairment is quite the sight to behold when going nuts behind the drums like Muppets’ Animal and at the same time being able to deliver the vocals perfectly. A cool discovery this late in the night!

Headliner of the first afterparty night was a familiar sight. Heavy metal outfit Oceanhoarse has been a rising star in the Finnish music scene and it’s always a pleasure to see them take over the stage. With members all having past experiences in other bands and very live-oriented music, their shows are always highly entertaining. And again, that was the case here tonight.

Some simple, but efficient props on stage allowing them to strike certain poses, a light and smoke box at the front for the vocalist to both shine and get smoked out and at the end of the show during the song ‘Oceanhoarse‘ the appearance of their mascot the Oceanhoarse all makes for a good show. The one thing that was kind of lacking a bit this time around, was a good sound. Somehow I had a hard time hearing Joonas‘ vocals properly and something really seemed off with the overall mix. A pity for an otherwise great show.

On the Saturday there was a nice line-up of 3 great Finnish (hard) rock bands. Due to an already really long and busy day, and an early engagement the next day, I decided to pass on this afterparty. But those who went, surely had a great time with Luna Kills (formerly known as Tocornal), Vagabond Hearts and Block Buster. Check them out for sure, Block Buster is actually releasing a new album in the beginning of this Fall! Rock on!

Afterparty day 3 (On The Rocks)

Ah, Sunday already! Luckily I got some room to save up a bit of energy and still go to the very last afterparty of the weekend. The 2 bands of this night brought a showcase of modern Finnish hard rock and quite the party to On The Rocks!

First up was Dirt, an up-and-coming rock band that I’ve seen mentioned on many concert bills lately. So I was curious to see what all the fuss was about. And call me impressed! Straight from the start they kicked in hard and rocked any tiredness Tuska visitors might feel at this point. It’s clearly a band that has a whole lot of fun on stage and that works infectiously. Aside from the groovy and rock ‘n’ rollin’ music, vocalist Aleksi brought an extra dimension to the music with a quite impressive range, at times making me think of Alice In Chains. Not complaining about that for one moment!

Very last band that I’d be hearing and seeing for Tuska 2019… who better than my friends from Shiraz Lane? Ever since I caught them the first time years ago at my very first Tuska, they’ve been steadily growing and getting better and better at what they do. Sleazy, bluesy hard rock with influences of some of rock history’s greats, combined with an energetic and positive show every single time. No matter if they play a big stage or a small stage, with Shiraz Lane you’ll have fun.

This time it felt like they were going back a bit to their roots playing the smaller On The Rocks stage, having set that exact venue on fire several times in the past. They’re even featured in the promotional video you can see on the screens spread through this venue… And that actually got reflected in their setlist. Quite some “oldies” were featured in their set, combined with the great tracks from their latest release ‘Carnival Days’. Looking forward what they’ll bring to the table with the 3rd release they’re working on right now!