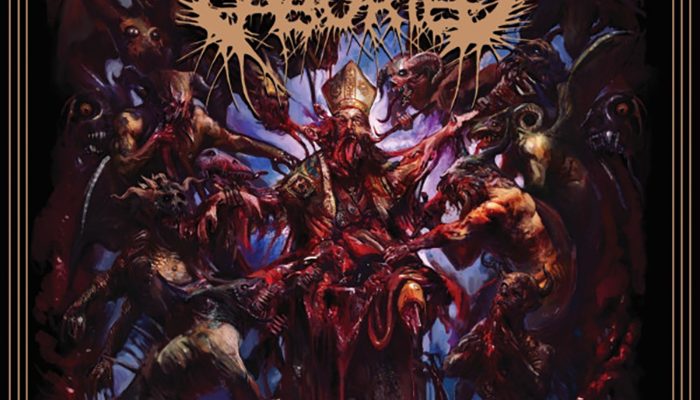 In GRIMM’s noble quest to promote Belgian metal, one ponders on how much Aborted are still Belgian. Sure, Svencho’s still the “yokel van Boerekôte” (the bumpkin from West-Flanders), but that’s about as Belgian as it gets. And Ian Jekelis and Ken Bedene really carry the band as Americans so we can pull Aborted to our breast as Belgian, but slag ‘em off at the same time for still not being the class-A band we want ‘em to be.

And this EP is a curiosity. Sure, it’s still the pummel-ya-in-the-face death metal we know, with the fair amount of excellent musicianship, but they dropped some nice pieces of punch in their pudding. Opener ‘Gloom And The Art Of Tribulation’ starts off with the same kind of meaningless intro as usual, shifts to gear 9 with a cool dissonant grindy riff, that goes totally left-field for Aborted, and bleeds into a rhythmic track that flows toward their standard. Some slow melodic touches halfway are as doomy as they have never been. Attempts to revive the songs afterwards are br00tal, but fall dead.

‘Serpents Of Depravity’ is the classic on the EP. That rolling double bass riff in the beginning is top notch! The song is tight as hell, plunges into different corners at every hook (drops into a sick black metal break halfway including kvlt grim vocals) and never loses the drive of the first riff. One can imagine the surgical crowd pumping their fists and chanting along!

‘Funereal Malediction‘ starts off classic Aborted (with a bit of The Black Dahlia Murder in the equation) but after the solo, it pulls the brakes for a nice melodic part that is almost epic. I wish they’d gone for the prize and had a go at the full blown grand doomy finale.

The regular Aborted fan should be happy! A vintage slaughter fest just the way they like it. Enough blasts, intricate fills, twisted riffs and Svencho barking like a hound of hell! And Jekelis really carries the day. Dude wrote lots of sick shit and pulls some of the best solos in this band. But some doubters can also like the tiny bits where Aborted are pushing their boundaries. It makes me wonder what the next album will sound like if Jekelis can convince the rest they can still be Aborted when they go for the full-blown experiment.