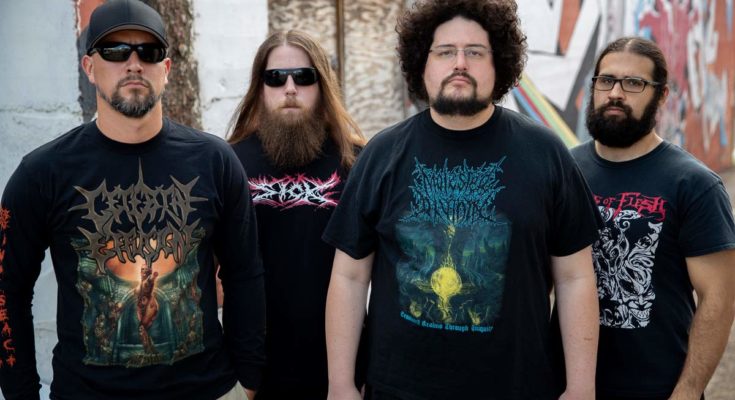 From the infamous, incendiary killing fields of Texas, a state that seethes with some of the most brutal death metal on the planet, come Architectural Genocide with their bone-grinding debut album, ‘Cordyceptic Anthropomorph‘. Eight songs of pitiless savagery delivered with enough power to blast you into pieces. This album is a vengeful, punishing assault upon the world, armed to the teeth with superior weaponry and devastating firepower.

In 2018 Architectural Genocide released their one and only demo, featuring the sickening duo ‘Force Fed Fecal Matter’ and ‘Void Of Atrocity’ – a vicious one-two of brute force and evil intent. It was enough to persuade Comatose Music to invest in the band and the label’s faith is about to be repaid tenfold. In the months since that demo crawled from the Texas sewers, Architectural Genocide have tapped into previously unimagined reserves of pulverising violence and developed a simply shocking relentlessness and intensity of focus. ‘Cordyceptic Anthropomorph‘ is a blast beat driven war machine, fuelled by implacable fury. Exhilarating and terrifying in equal measure this is not a listening experience you will walk away from unscathed.

Mixed and mastered by Davide Billia (Beheaded, Antropofagus, Hour Of Penance etc), upon its release on March 13th, ‘Cordyceptic Anthropomorph‘ will deliver a payload of nuclear proportions and send shock waves through a scene that might have thought itself immune to the effects of blistering brutality.