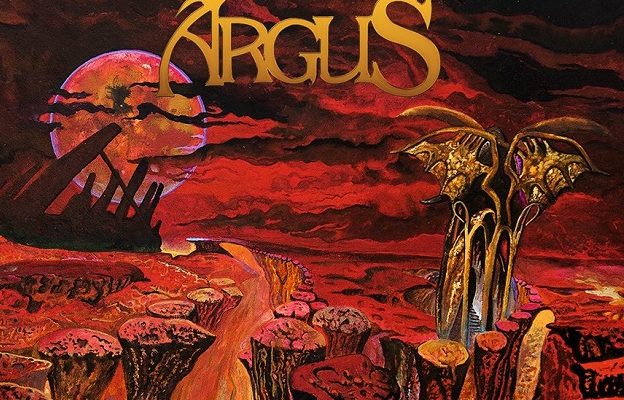 American heavy metal torchbearers Argus are ready to crank up the heat with their fourth album. From Fields of Fire will be released this September through Cruz del Sur Music. Fans may expect 9 new tracks of sizzling metallic glory, topped off with volcanic cover artwork courtesy of visual artist Brad Moore.

Argus made a name for themselves by releasing three incredibly consistent albums: the self-titled debut (2009), sophomore Boldly Stride The Doomed (2011) and career highlight Beyond The Martyrs (2013). Starting out as a heavy/doom hybrid, their sound gradually evolved towards a moody type of heavy metal that is both melodically intricate and rhythmically compelling. Unique features of the band are the leather-lunged vocals of Brian “Butch” Balich and the crafty guitar playing of Jason Mucio, whose ear-pleasing solos call to mind the best of Adrian Smith and Chris Poland.

It takes time to create works of such quality, something Balich is well aware of:

“If you had told me in 2013 that it would be four years until the next album, I would’ve been incredulous, but sometimes that sort of thing happens. We didn’t want to rush the material. Because Argus is really a labor of love for us, it will always be that we release music when we are ready and not a second sooner.”

Boasting a warm and clear production job, From Fields of Fire may well enable Argus to expand beyond their current cult following. But as always, Balich is brutally honest about the band’s expectations:

“We hope our fans like it as much as we do and that it will have some meaning to them. It’s kind of a waste of energy to concern ourselves much with how well it sells or how it is received by critics . . . Of course we want it to sell well and for it to be well-reviewed, but we are very realistic about the ways of the music business for a band like Argus and short of throwing away our jobs or selling our souls, it’s a tough road to make some headway. We’re cool with that. Our goal is to keep clawing for more ears to listen, more faces to be in the crowds at our shows . . . those are things we hope will happen.”