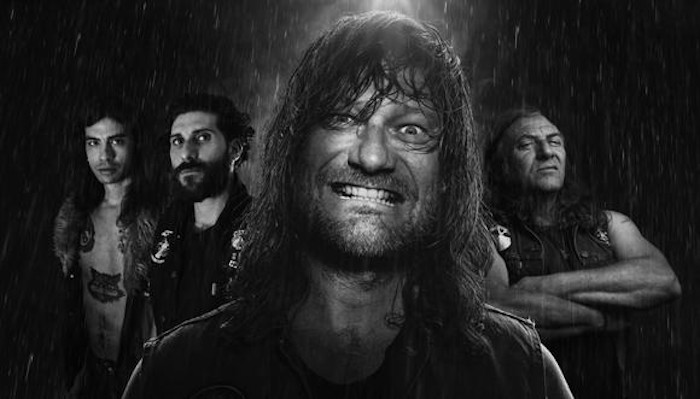 Recorded and produced by Richard Behrens in the winter of 2018/19 at Big Snuff Studio, Berlin, it is the first album with the new line-up consisting of original members, Mikey Tucker (vocalist) and Frank Trobbiani (drums) and introducing new members, Marco Gennaro (guitarist) and Kris Fiore (bass). The Rock`n`Roll juggernaut seized the opportunity to refine their hard-rock formula since the release of Mount The Mountain two years ago. The result is an electrifying sledgehammer that cements their name MAMMOTH MAMMOTH. Kreuzung’s (German for crossroads) hypnotic title track could crush a beer can with it’s sheer soundwave force, try it out and watch their brand new video for the album title track HERE!

In January 2017, the band found themselves at a crossroads. Already committed to two European tours, including their first visit to Spain and Portugal plus a large number of shows on the summer festival circuit, original guitarist Ben Couzens and bassist Pete Bell were unable to perform those ongoing commitments. In order for MAMMOTH MAMMOTH to honour those shows, Tucker and Trobbiani needed to find replacement musicians to continue to bring the high-energy, beer- soaked, dirty-rock shows to their loyal fan base.

Inspired by new surroundings, Tucker, Trobbiani, Gennaro and Fiore holed themselves up in Rock Haus, Berlin in 2018 and crafted the new album together whilst searching for a new producer. Someone who would both challenge and nurture their new line-up. Tucker says on working with Richard,

‘’I wanted to introduce a new sound, something a little more vintage sounding. I was tired of listening to rock albums that were so overly produced they’d lost all their soul. I stumbled upon Big Snuff Studio and really liked the work they were doing with Kadavar.’’

‘’Writing and recording ‘’Kreuzung’’ in Berlin has been a refreshing change, the collaborative process made the whole experience killer and we can’t wait to play it live to everyone.’’

Kreuzung, signifies where the band had found themselves in 2017, somewhere between the past, the present and the future. This album proves that the gritty Rock`n`Roll manifesto of MAMMOTH MAMMOTH has truly evolved and they know exactly where they’re heading next.

Kreuzung will be available on LP, CD and in Digital formats, the pre-sale has just started at THIS LOCATION!

Known for their intense high-energy and beer-soaked Rock`n`Roll live shows, MAMMOTH MAMMOTH will be hitting the road again this Fall, with a heavy touring schedule to follow: