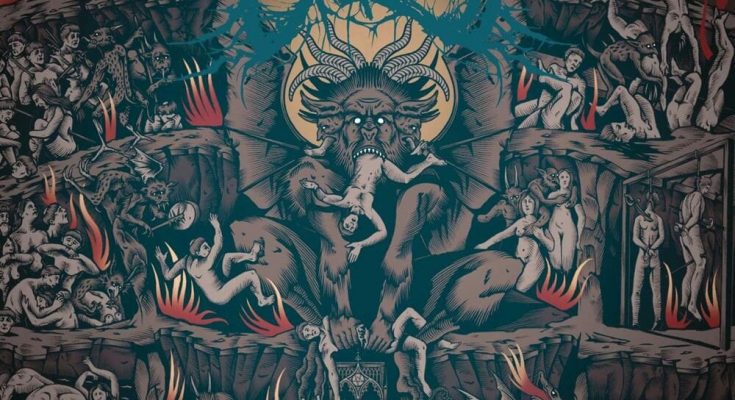 Denmark’s rising death metal outfit Baest returns after one year with their second album Venenum. The quintet’s inspiration comes from veteran bands such as Entombed, Bloodbath and Grave. Formed in 2015 this young death metal squad released an impressive debut via Century Media last year. With excellent and renowned bands hailing from Denmark like Undergang and Phrenelith, Baest is another rising talent from this Scandinavian country.

On the new album the band unleash their fury with the buzzing chainsaw guitar riffs and brutal growls. And right from the opening track Vitriol Lament the band brings some intense sonic cruelty on the latest offering. With pounding HM-2 riffs and blast beast which makes a great start to the album the band successfully bring the Scandinavian old school influences into action.

Fans who have enjoyed their debut album Danse Macabre will find many interesting qualities on the new album. In terms of songwriting and music Venenum is deliberately cruel and brutal, the approach to musical direction is almost the same. But that’s not all, the Danish outfit have their own way to play death metal. The second track Gula which is a reminiscent to early Bloodbath style, can distinguished by the mid pacing grooves and low guttural vocals.

Baest keep things steady and brutal as the guitars swoops with sonic qualities infusing blast beats with powerful riffs. The track is harnessed with low tuned riffs and mid pace. Danse Macabre was fully tightened with buzz saw riffs and displayed a wide influence from the Swedish death metal style.

Once again Venenum explores the potential of the band as there is a remarkable energy within the new tracks. Baest seems to continue in the same direction of the debut album, but this time they push harder where they intent to sound more organic and raw. The groundwork here feels natural and simple giving importance to their dark melodies as well which can be heard on some of the tracks.

Venenum shows more variety in the guitar department, and generally you can observe the musical expansion. Nihil for example is a monstrous track where the band uncovers their musical talents. The opening riff work is pretty much influenced by bands like Slayer, the sharp guitar tone on this track is viciously feral. The solo composition sound a bit technical along with the slow crushing drums and spiteful growls.

Baest‘s true force lays within the body of the assaulting riffs, having two guitars in the band has boosted the sonic intensity. The tracks have an angry pace while the guitars downpour the gale of riffs, the new album is a fair improvement from the debut. Baest and their approach to old fashioned Swedish death metal on the new album avoids possible limitations and the tracks here are divergent.

The solid grip on brutality and the vital nature of the album title track shows a speed of motion from the mid tempo parts. The band also infuse groove in mid tempo by adding vigorous dynamics. Yet there are sufficient amount of brutality on each track of the album. Though it became a traditional thing for the band to use clean guitars, Styx is an instrumental piece that brings some dark melodies.

The strong and violent guitar tone returns to pulverize on Heresy, the drums on this track sound energetic and brutal. While the guitars sounds loud and firing on all cylinders, the track is filled with feral growls and chaotic solos. The tone here increases rapidly as the band moves into thrusting grooves.

Venenum contains many great moments and the album in general is brutal. Each instrument is utilized to the maximum capacity to sound loud and crushing! Danse Macabre had many qualities and abilities and induced the real potential of the Danish quintet. The album escalates with massive tracks like So Above So Below.

The beginning of that track’s emphasis is on double bass and top notch death metal growls with guitars firing killer solos. The track is regarded by nasty riffs and slow drum beats which fluctuate between blast beats and crushing pace. Sodomized and Empty Throne are perfect old school death metal tracks, the guitars here sound sick approached with energetic charge of riffs. Baest knows how to sum up their style by extracting the best elements from the Swedish and Floridian death metal bands like Bloodbath, Entombed and Morbid Angel. Venenum is highly recommended for those who like old school death metal sound rotten and sick.