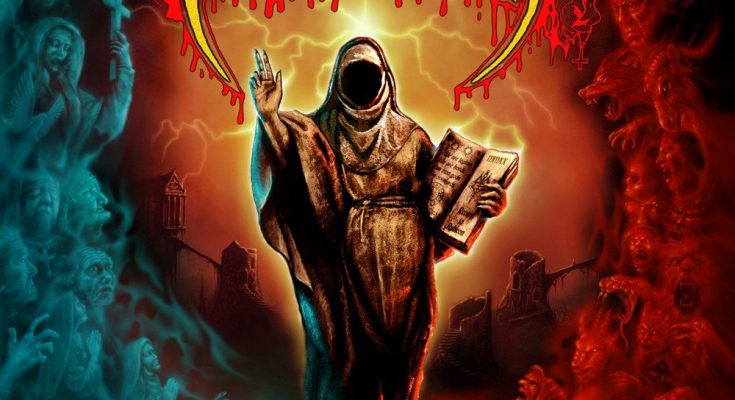 Finally, after twelve years of waiting the British death metal veterans Benediction return with the highly anticipated album ‘Scriptures‘. In the late eighties, the U.K. extreme underground scene was led by the five mainstays: Napalm Death, Bolt Thrower, Carcass, Cancer and Benediction. Formed in 1989 in Birmingham by guitarists Darren Brookes and Peter Rew, the band presented the crude old school sound of British death metal throughout these prosperous years. Yet their accomplished method of crushing grooves and pummeling drums only manifested when the band recruited the legendary vocalist Dave Ingram in 1991 and brought a unique flavor to the band’s music. For many years Benediction prevailed amongst the biggest death metal acts in Europe and U.S.A. In 1990 they inked a worldwide deal with the German underground metal label Nuclear Blast, after which the band became widely known for classic gems like ‘Subconscious Terror’, ‘The Grand Leveller‘, ‘Transcend the Rubicon‘ and ‘Grind Bastard‘. Perhaps these outputs most accurately define their brand of Birmingham style death metal.

Over three decades of sincere dedication and diligence, they released seven studio albums, yet their later outputs weren’t on par with their former standards. On the eighth studio album ‘Scriptures‘ you can expect nothing less than a groundbreaking performance. For this reason, Benediction’s latest record is inflated with that nostalgic old spirit. The band managed to put a familiar cast with Dave Ingram back in the helm as the vocalist. The lineup also consists of Dan Bate (bass guitar) and Giovanni Durst (drums). The latest craft brings to light such intensive work. The British quintet managed to put their act together in showing unprecedented diversity.

The songs here are powered by fierce growls, supreme scorching death metal riffs and catchy rhythm guitars. The album opener ‘Iterations of I‘ ignites at a blistering pace, characterized by the solid and energetic fusion of death and thrash metal. These core principles were represented by the band in their early albums, yet there are many variations applied to the newer songs. Tracks like ‘Scriptures in Scarlet‘ include many familiar parts from the band’s previous album such as Grind Bastard. The excelling performance emphasizes the great vocal delivery of Dave Ingram and at the same time Benediction shows versatility. The main components of the songs are explicitly raw and stylized in heavy tempos and grinding grooves. A song like ‘The Crooked Man‘ combines the combustible energy and results in overwhelming strikes of thrashing drums where Benediction explores their organic formula. Hence, their songs are played flawlessly.

‘Scriptures‘ also represents the core element of the Birmingham style of death metal. Dave Ingram‘s charismatic vocals give the songs such a bold identity. The drums often initiate a crushing double bass that provides a massive thrust to the album’s highlight track ‘Stormcrow‘. The pulverizing mechanism is fueled with a compelling type of riffs, which shows the cohesive chemistry between the band, bringing up twelve tracks that surge in energetic momentum.

The aural waves of the crushing guitars along with the hammering drums both provide enough doses of infectious hooks and the blasting double bass pedals are delivered with a vital force. While the other songs such as ‘Progenitors of a New Paradigm‘ and ‘Rabid Carnality‘ are driven by the powerful heaviness of the tempo, Benediction coalesces the old school elements of punk and thrash metal and this proves the solid foundation of the band. The most outstanding part of the latest album is how the veterans maintain the flow of aggression. Although there is a forcible blend of assertiveness, the music never gets too brutal. ‘In Our Hands, The Scars‘ is dominated by an audible bass guitar and this explains the clarity of the sound production and mixing.

The remarkable skill of the dynamic, dual guitars on ‘Embrace the Kill‘ depicts a framework of undisputed hostility, but at the same time the guitar section executes some catchy melodies. In other tracks like ‘Neverwhen‘ the veterans managed to showcase the classic aspects of the solid riffing and propelling drums. ‘Scriptures’ feels like a traditional throwback to the band’s heydays. In many ways, I couldn’t resist the sonic energy and the swelling riffs that are measured at a visceral scale. The final two tracks ‘The Blight at the End‘ and ‘We Are the Legion‘ are both high-octane. By finding the precise balance between the grooves and the traditional old school death metal, Benediction on their newest album achieved what many old school bands failed to attain. ‘Scriptures’ is definitely a masterpiece of raw, old school death metal full of grinds and attitude!!!