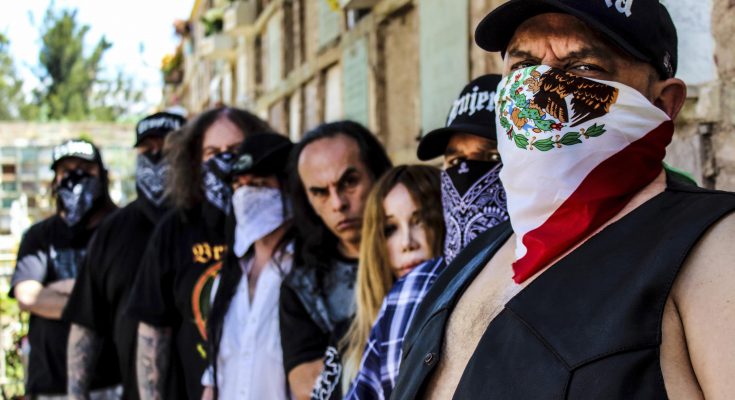 The Mexican druglords of Brujeria are a rather rare appearance in Europe. So the fact that they were present at Tuska 2017 seemed an opportunity we just couldn’t let go. We enjoyed a massive “fuck you” to Trump & co, backed by a head-crushing and face-smashing wall of angry, “Mexican” death metal/deathcore thrown at us. Afterwards we sat down with the ever charming Jorge Bruja to have a most entertaining chat riddled with laughs and funny banter. Though not before he was promised that after me, he only had to talk to one more reporter and then he could have as many drinks as he wanted… 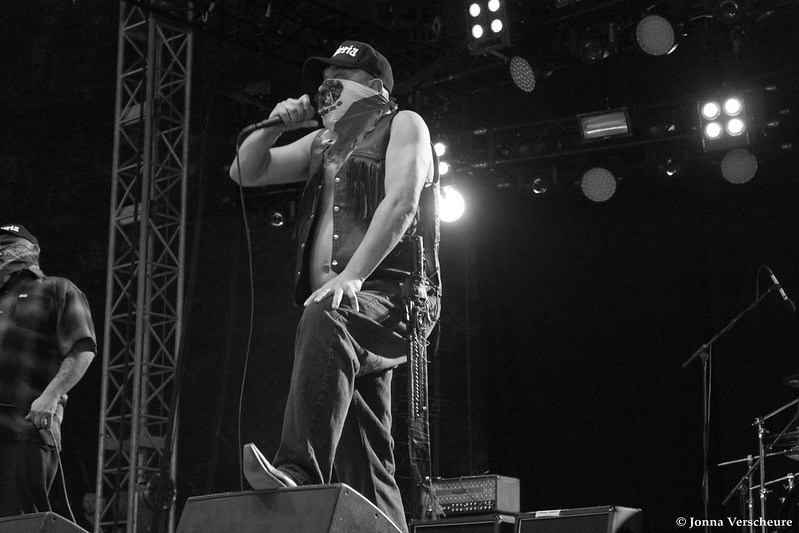 Hey, nice to meet you! How are you?

I can imagine so, you guys don’t get here that often…

Yeah, it’s our first time here. I guess it’s hard to get here for us (laughs) But it’s good, it’s fun, I like the people here, it’s good!

Yeah, it’s nice to see that you finally managed to get here.

You just hate people who hate…

Yeah, my wife who is American, is still rather depressed about what happened.

It’s ugly overthere. It’s gone back to like the sixties, when Nixon was president. Or Ronald Reagan… (laughs) What’s bad, is that it was all really good. Like you know, the early 2000’s everything was great overthere. There was nothing to say about it and then here comes Trump and all of this… oh my god…

Everything was getting better! Like my son would say “oh, I got my new friend” and a black kid comes over and I said “This never happened before, I never had a black friend!” It’s like things are changing, it was all good. And then all back to everybody hating everybody, it’s ugly overthere. It’s bad… widespread hate.

Yeah (laughs) He got all the haters out, he woke them all up like that (snaps his fingers) like “boom!”

And they seem to not want to fall back asleep again…

Yeah (laughs) Trump keeps them up by telling them lies: “We’re doing great!”

That makes me wonder: since it’s your first album again in 16 years, was all the shit happening an inspiration to make one?

It helped! We were doing an album, but we were doing it slow, let’s go on tour and well, time goes fast. Manjana Mexican style, manjana… and Trump started to come around and we were like “something is happening here”. You know, we didn’t think he was going to win, but he won! It’s like the whole world changed, no one, no one thought he would win and all of the sudden he won. Everybody was shocked, it was like a shockwave. He was cheating, I know he cheated, with the Russians and such.

That was the problem kind of: no one took him serious…

Yeah! No one cared about that! And then all of a sudden he won! And I was like “Why didn’t I vote?” (laughs) I was in Mexico during the voting, oh man, that’s bad. It’s bad, but it’s a good thing too. Because everybody is watching what he does and everybody is checking everything. There’s gonna be no more corruption… they don’t want him to corrupt because he’s corrupt obviously! So in a way everybody is getting used to checking shit so it’s not gonna corrupt anymore. In a way he’s making people work that way and that’s good.

Oh yeah, they get motivation. Go ahead and hate us, you know and make us famous. I dare you, make us famous, I dare you! (laughs) We just had a comedian, Kathy Griffin, overthere that took a Trump head and held it like what we did a year ago. And she ripped us off and they kicked her ass and got in trouble really bad overthere. So she came out saying “all these metal bands are doing it” and she mentioned GWAR and all the bands doing it, not Brujeria, all the bands but not the band she ripped off (laughs). Because she didn’t want to show people that she ripped us off exactly, like the exact same head… like “oh god, what is she doing?” That’s funny. But good for the music, yeah.

Yeah, I’m curious to see what is going to come if you look at what the hardcore scene was during Reagan time!

That’s nothing compared to what it is now. Now it’s THE worst it can ever be, ever! The future, the past… ever! It can never get worse. Because it’s always going to be like “that guy’s a Trump!”. I met Ronald Reagan face to face… he was like a walking zombie! (laughs) You get clowns, you know. Like Schwarzenegger was governor of California.

I much rather would’ve seen Schwarzenegger as president than Trump though!

He doesn’t like Trump! It’s amazing to me that they don’t get a long. I’m impressed!

Yeah, him constantly posting videos against what Trump decided and such, like for instance pulling out of the Paris climate agreement: “We’re not going to do that, we need to take care of us country!”

You have to! You can’t be the biggest country and say no to that! You can’t say no! And then he says no! People don’t get it now, but it’s something really important. The biggest country HAS to be in that and then Russia comes “We’re not going to do it either!” Like, oh my god!

Anyway, we probably could go on and on about that…

Yeah, music. How does it feel to finally have a new record out now?

It’s good! Like I said earlier, we were slow… we’re old and we’re bad! So it’s good to have something new out. Now, we recorded like 2-3 songs this week for the next one, so we already have like half a record ready to go. So it’s getting there now… like I said, what’s going on is good for music. We’re an example of that (laughs)

And we have fun, we like touring and playing. You’ve seen our show, we’re having fun!

I always like your music, because your brutal but you have a cool groove to it!

Yeah, our stuff is sometimes really mean and bad. But it’s real shit that happened to people a lot of times, true stories. But yeah, it has to be fun. You have to have fun playing the songs and such. Every guy in the band is glad being there, it’s not really like working.

For instance your Macarena cover shows that there’s always a bit of a party going with you guys!

That song was huge back then. And then we were like “we got to have a weed song”, because weed was illegal back then and the Mexicans had to back the weed thing, do our part. That was a huge, huge song. And the good thing about it, is that we send it to lawyers to get it licensed, you know, put it out legally. And the lawyers got it and they said that they had a thousand requests to do that song and different things and they were saying “yes” or “no”. And they got to ours and they couldn’t say yes or no, so they had to send it to the guys who did the original. The only one to go to the original guys for them to decide was ours. And they were like “What the fuck is this? No!”. It was a “Fuck no!” by the old man, fuck that shit. So it just went out illegal (laughs)

It was cool that you finished with that song today, I loved it!

Definitely! So, any last words still for our readers?

I’ll only say this: don’t go to the States! Go to Mexico, that’s better! We’re gonna build a wall to keep the Americans out… (laughs)

And that one the Mexicans will pay for then?

“You can’t get it in, we’re keeping you out!” Scratching on the wall… (laughs)

(laughs) Anyway, thanks for the talk! It was good to meet you!