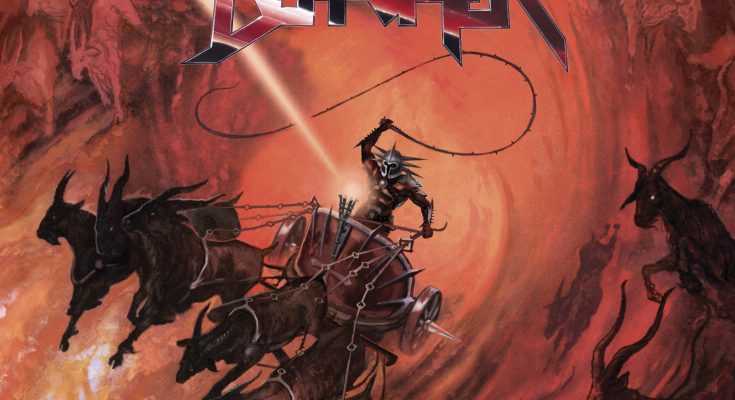 A metal band that features the legendary umlaut makes me easily expect some blistering fast and heavy music, looking at some of the bands using it (like Motörhead and Deströyer 666). Enter the Belgian speed metal outfit Bütcher and their sophomore release ‘666 Goats Carry My Chariot’ with a bit over half an hour of exactly that: blistering fast, heavy and kickass metal music.

The album title already somewhat hints at what you can expect and once the into track ‘Inauguration of Steele’ properly set the scene, there it is… Slapping you in the face at 200 miles an hour, you get the kind of catchy, blackened speed/heavy metal that is Bütcher with the track ‘Iron Bitch’. Fast drums, blistering riffs, raunchy, at times high pitched and dirty vocals, choruses that people can easily shout along to and a production that shouts 80’s metal in all its imperfections makes for a complete package in the veins of for instance Nifelheim or like a more blackened Evil Invaders that simply never grows old. And just like those outfits they don’t shy away one bit from stereotypes and almost kitschy things like the frequently used umlaut, altered words like “steele” and bolstering names like R. Hellshrieker (vocals), KK Ripper (guitars) and LV Speedhämmer (drums), what almost feels like them taking the piss out of heavy metal history but with such a dedication that it turns into an ode to it all.

And with tracks like ’45 RPM’ and ‘Metallström/Face the Bütcher’ the kick in even higher gears than I previously though was possible, delivering some blackened thrash/speed metal anthems that’ll get your blood pumping. ‘Sentinels of Dethe’ goes even beyond that by introducing an absolutely frantic and demented sounding Hellshrieker, blasting you with what many would classify as straight-up noise. Unexpectedly, with their over 9 min epic title track (which is pretty long for a speed band), they introduce an early viking metal sound a la Bathory and Darkthrone in all its glory, actually slowing things down a bit at times, showing that they do more than just blasting you with speed. ‘Viking Funeral’ and ‘Brazen Serpent’ actually continue this somewhat, where the first is a blistering heavily black metal infused track and the latter has more variation in tempo. But overall, the second half of tracks are clearly more black metal inspired than in the beginning of the album.

Bütcher‘s second release is a perfect embodiment of the maniacs that they are. ‘666 Goats Carry My Chariot’ might not be for everyone, but when it works for you, you’ll have a whole lot of fun. It’s fast, it’s hot, it’s relentless and shrieks at you like a pig being slaughtered, brimming with cliches and stereotypes to a degree that you start to take it serious. I’d say to just put this record on, sit back and relax, but with this kind of music that is not an option. It’s more what you’d expect to be the soundtrack to the life of a blood-soaked, wide-eyed berserker with a grin from ear to ear just before he dives into the maelstrom of a battle.

One thought on “Bütcher – 666 Goats Carry My Chariot”