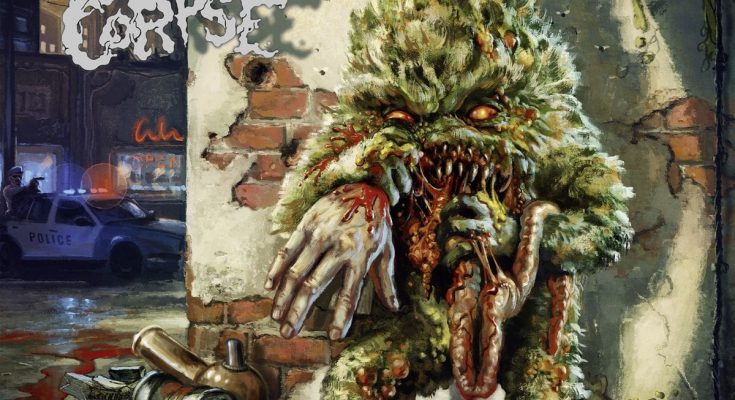 U.S. death metal band Cannabis Corpse bounces back with a new album titled Nug So Vile, the latest effort from the heavy marijuana smokers comes two years after the release of their fifth album Left Hand Pass. The trio brings another strong album in a year full of great death metal albums. Cannabis Corpse initiated by the bassist/vocalist Phil “Landphil” Hall of Municipal Waste and Iron Reagan. The weed themed death metal band has been rooted firmly in the American underground metal scene since 2006. Their outstanding method of playing death metal music complements the 90’s Floridian death metal bands like Cannibal Corpse. Over the past releases they began referencing to a number of famous acts such as Morbid Angel, Nile, Suffocation, Entombed and now on their 6th outing the solid reference seems to be set on Cryptopsy and other death metal bands. The lineup of the newest album features drummer Josh “Hellhammer” Hall and guitarist Adam Guilliams.

Cannabis Corpse‘s music isn’t only entertaining, the band plays a modernized style of death metal. And they basically have a unique take on old school therefore sound fresh and energized. The brutalized hybridization of Six Feet Under meets Cannibal Corpse gives them a multi-layered sound. The album starts with such the overwhelming track Conquerors of Chronageddon. It’s rather an excellent song to start the album with and the band hits the extreme and raw dynamics by launching huge nifty riffs and heavy growls. The technical touches of the guitars on the next track Nug So Vile is a testimony of the band’s professional talent in writing such catchy and memorable music. Nug So Vile is definitely an improvement from the previous album Left Hand Pass, in terms of influences Cannabis Corpse expose their fondness to many death metal bands.

The latest album from the marijuana themed outfit is guaranteed to satisfy the fans. Blunt Force Domain offers intense guitar riffs and excellent solos the vocals on this track sounds monstrous. The track is a good combination of deep roaring growls and battering drums, musically Cannabis Corpse have a good understanding of melding the raw death metal riffs with growls. There are also plenty of leads and guitar solos that makes them sound more modernized and technical. But that’s not only what they are good at, Cannabis Corpse has a wicked sense of humor the band decided to move away from the horror themed lyrics to focus more on dark humor.

From the funny and cool cover arts to video clips they have always provided amusement to the fans. Cylinder of Madness engages in driving force of aggressive and raw death metal riffs, while the drums always deliver the power to the tracks. Nug So Vile focuses on catchy grooves allowing the tracks to stabilize at rawness. The majority of the album is fulfilling, brutal and they provide a sense of hostility. I couldn’t stop laughing when I came across the fifth track Blasphemy made Hash. This highlight track features superb guitar work, despite of the stoner title tracks that creates a druggie and green hazy smoke themes of hallucinations. Cannabis Corpse is good at giving a solid tribute to bands like Cannibal Corpse.

Cheeba Jigsore Quandary is reminiscence of the vocal style of George “Corpse Grinder “Fisher. The extreme delivery can be experienced through the heavy riffs and total blast of brutality. The highly professional musicians have an excellent approach to death metal, and their new album is well structured with powerful riffs, guttural growls and technical prowess. Nug So Vile is greatly enhanced and the riff styling is more brutal than the previous album. Boosted by chugging riffs and chopping drums the guitar techniques on Edibles Autopsy includes killer solos and intensity. Dawn of Weed Possession has a direct reference to the band Immolation, the track initiates into slower pacing and provides memorable moments full of head banging riffs.

Nug So Vile is only 36 minutes long but it’s a punchy death metal record and it’s prime aspect is concentrated on the consistency of the songs. Elements of groove which sets a dynamic formula to the tracks are equally measured on The Cone is Red (Long Live The Cone). The Ultimate Indica-ntation and From Enslavement to Hydrobilteration both have references to Incantation and Napalm Death. Overall this is one of the band’s strongest albums if you add their previous outings such as Beneath Grow Lights Thou Shalt Rise and Tube of the Resinated. Nug So Vile is a fucking great album laden with grooves and brutality.